Biocontrol is the reduction of undesirable species population by natural enemies and usually involves an active human role [1]. These undesirable species can range from agricultural pests to water contaminants to virulent pathogens. They are undesirable because these species are a detriment to human interests in an ecosystem. Microbes used for biocontrol reduce the target species' population through many ecological mechanisms including pathogenism, competition, production of allelochemicals and other interactions [2][1]. Bacteria, fungi and viruses can all act as biocontrol agents due to the large diversity of target species and the variety of methods of action. Important examples of microbial biocontrol agents include Bacillus thuringiensis, fluorescent pseudomonads and Beauveria bassiana. In agriculture, microbial biocontrol agents are usually referred to as biopesticides.

Biocontrol microbes control their target species through a multitude of biological interactions. The most common are competition for resources, causing disease in the target species (pathogenesis), production of allelochemicals and influencing crop plants.

Competition is the limitation of fitness of one species by the mutual use of a limited resource by both that species and other species[2]. While a promising avenue for biocontrol, competition has not been well studied or widely applied. Biocontrol can be achieved by competition when biocontrol agents out-compete pathogenic microbes for resources. It is most common in the rhizosphere where beneficial bacteria colonize plant roots and inhibit access to plant roots for pathogenic bacteria and fungi. In iron-limiting soils, beneficial bacteria produce iron chelating compounds or siderophores which deny access to iron for pathogenic microbes. Mycorrhizal fungi also have the potential for biotcontrol through competition, but little research has been done on the possibility[1].

Pathogenism is the ability to cause disease in a host organism[4]. The use of disease-causing microbes for pest control has been mainly used to control insects, soil invertebrates and pathogenic bacteria. These pest species all have bacteria, fungi and virus pathogens which antagonize these pests at different life stages with unique pathologies. Pathogens have been successfully employed to control many insect larvae and adults in crop fields and human pathogens in water supplies.

Allelopathy is the production of chemicals that influence the growth, health and reproduction of other organisms[2]. Many microbes produce chemicals that inhibit the growth of plant pathogens. Siderophores (iron chelating chemicals), antibiotics, biocidal volatiles, lytic enzymes (catalysts for the breakdown of compounds), and detoxification enzymes are all examples of allelochemicals produced by soil microbes. Siderophores remove available iron from the soil; antibiotics discourage bacterial colonization; lytic enzymes degrade many organic compounds including chitin (fungal cell walls); detoxification enzymes prevent damage from pathogenic toxins.

Below are a few examples of microbes used as biocontrol agents in various applications. Biocontrol is most widely used in agriculture, but it has been applied to disease prevention in humans and water treatment. 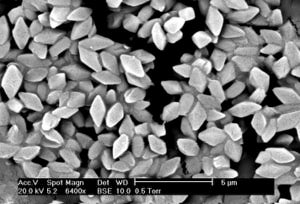 This bacterium has been successfully used for many years to control larvae of moths, beetles and flies that cause damage to crop roots. Bt produces crystalline proteins that are very toxic when ingested by larvae. The crystals cause holes to develop in the gut lining of the larvae after dissolving. In the late 1990s, corn and cotton varieties were created that contained a short segment of the Bt genome so that they would produce Bt crystals. Since Bt corn and Bt cotton have gained popularity, larvae have begun to develop resistance to the toxic crystals[5]. 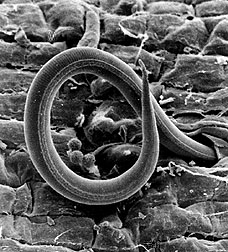 A strain of this mutualistic soil bacterium has shown the ability to induce resistance against root-knot nematode in tomato plants. The presence of endophyte bacteria discourages nematode parasitism through activating ethylene and jasmonic acid pathways in the tomato plant. These hormone pathways increase the plant's resistance to colonization by organisms other than Rhizobium etli[9].

Members of this order of viruses have been shown to effectively control or eliminate salmonella in waste water. These viruses are bacteriophages that attack salmonella and destroy colonies of the pathogen. While there is still many unknowns in the ecology of viruses and their real world application to water treatment, these viruses are promising possibilities to protect against salmonella in drinking water[7].

These bacteria discourage the growth of virulent bacteria by producing antibiotics and colonizing root systems. The pathway for the anitbiotic properties is not well described,but might be similar to other two-component signalling system that regulate antibiotic production in other psuedomonads[2].

This fungus has been shown to effectively control mosquito populations which might make it invaluable in controlling malaria in areas where chemical insecticide resistance has developed. The fungus targets and cause high mortality in mosquito larvae particularly in the third instar. This fungus coolonizes the exterior of the mosquito and grows into the hemolymph which causes death in 1-2 weeks [3].

The Risk Indicator System is a newly developed metric to assess environmental risks posed by pest control agents. It is based on persistence of the active ingredient, potential for dispersal, range of organisms that are affected, risk to vertebrate non-target species, and effects on the ecosystem. The authors suggest that RI could define low risk and reduced risk pesticides, but do not advocate using RI to determine acceptability of data waivers for regulatory purposes[8].

Beneficial microbial allelopathies in the root zone: the management of soil quality and plant disease with rhizobacteria by Sturz and Christie

Edited by Matt Eisenbart, a student of Angela Kent at the University of Illinois at Urbana-Champaign.