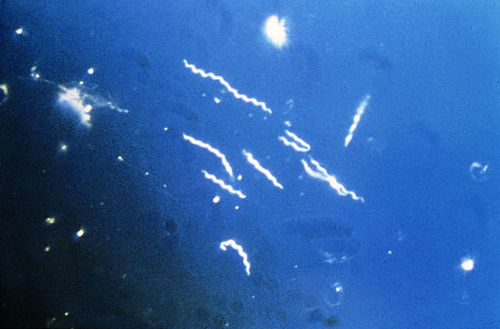 Borrelia burgdorferi is a Gram-negative spirochete bacterium and is the most studied cause of Lyme disease, the most widespread vector-borne infection in the United States and Europe. It is spread by Ixodes tick bites. The disease causes a wide variety of symptoms and, if left unidentified and untreated, can lead to irreversible, chronic multisystem damage. For this reason, research into the transmission and behavior of B. burgdorferi has been crucial to improved diagnostic techniques and treatment of the disease.

Interaction with the Innate Immune System

The first defence against foreign bodies within mammals is the innate immune system. For this reason, Borrelia burgdorferi, and other pathogens, have had to develop ways to avoid these defensive mechanisms.

The complement system in mammals uses factor H and factor H-like protein 1(FHL-1), soluble glycoproteins which alert the immune system they identify non-self-cells. B. burgdorferi have found a way to minimize this activation of the immune response by binding to factor H and FHL-1 to prevent it from signalling.

Complement regulator-acquiring surface protein A (CspA or CRASP1) of B. burgdorferi binds to factor H and FHL-1 (Siegel et al. 2010). By doing so, it can inactivate the formation of C3b, to prevent immune system acknowledgement. CspA is a protein that has two subunits (Hammerschmidt et al. 2014). This structure is thought to give CspA increased access to the binding site of factor H and FHL-1, allowing it to firmly attach. Although, the binding region is located inside the unbound protein complexes of factor H and FHL-1, the region is exposed when the C-terminal region of the proteins are bound to another molecule. Erp, a family of B. burgdorferi surface proteins, will bind to this C-terminal region and may allow for the binding of CspA (Caesar et al. 2013). The binding to this specific site is significant because this area is typically used for recognizing self-cells. By binding to them, B. burgdorferi trick the immune system into identifying the bacterial cells as self-cells when they are not. This may play a role in the autoimmune disorders sometimes connected with Lyme Disease

Phagocytes are a non-discriminatory method of immediately neutralizing any possible harmful non-self cells. To survive this, B. burgdorferi use outer surface protein (Osp) B to attenuate oxidative bursts in the lysosomes of phagocytes. They do this by attracting the reactive oxygen species in the lysozome so that the rest of the cell is left unaffected. This makes their digestion less likely and they may be able to be expelled from the phagocyte unharmed (Hartiala et al. 2008).

OspA and OspC are similar proteins that are needed for the bacteria’s survival. They are thought to play an important role in release from the tick and initial entry into the mammalian host. Although little is known about their direct affect on the host, the bacteria cannot survive the immune system without these proteins, thus it is thought that they may aide in immune evasion (Grimm et al 2004).

Interaction with the Adaptive Immune System 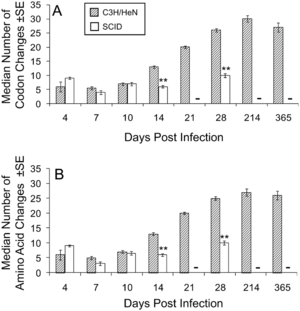 The adaptive immune system consists of cells that recognize specific foreign bodies as pathogenic and thus target and destroy these elements. Borrelia burgdorferi has many outer membrane substances that could be recognized by this system, so this is a potential problem for the bacteria if they want to stay alive and undetected.

B. burgdorferi uses variable lipoprotein surface-exposed (VlsE) to cause interactions with the adaptive immune system so that none of its other, more important proteins are identified and remembered as antigens. VlsE is B. burgdorferi’s only known adapting protein and consists of a crystal structure with six variable regions. These regions are localized to the surface of the molecule so they can interact with and adapt to the immune system (Eicken et al. 2002). The highly selective environment inside the mammalian host encourages the rapid changing of VlsE. To accomplish this, silent cassettes (mobile elements), and donor sequences are used to manipulate the genes in addition to single base pair changes (Coutte et al. 2009). The VlsE proteins are comprised of irregularly shaped loops encoded by antigenic cassettes. B. burgdorferi has at least fifteen different identified cassettes that can present at any of the variable regions giving the protein the ability to look like many different ones thus making it hard to identify and remember. It was found that the mutations in the cassettes were nonselective and even sequences containing stop codons were viable, indicating that the full length gene is not required. These mutations were found to be much more common in immunocompetent mice over immunodeficient mice indicating that the reason for mutation is to evade the immune system. The rapid changes in VlsE have been identified as crucial to immune system evasion. This is because the host quickly develops immunity to one VlsE and would be able to identify and kill the bacteria if they continued to express it. Changing the VlsE continuously ensures that the bacteria are always one step ahead of the immune system and are thus able to live indefinitely within the host (Rogovskyy and Brankhead 2013).

Interestingly, one protein region, {http://www.rockland-inc.com/Product.aspx?id=33993: C6], has been correlated with a strong immune response. It is currently thought that the bacteria may use this protein as a decoy to protect it's other surface proteins from being recognised. This effect occurs because the C6 provides competition for binding antibodies so they are not available to bind to unprotected or vital proteins.

The control of active variation and the possibility of using the non-changing sites of VlsE for detection are promising areas of research, which may lead us to a better understanding of this bacterium and how we can treat Lyme Disease.

Physical Evasion from the Immune System

Diagram of internal flagella of a spirochete. Flagella (red and orange) are attached to both ends of the bacterium offering a high-performance motor. (1) envelope of the bacteria, (2) cytoplasm (3) Flagellum (4) point of attachment of a flagellum. Laimot, 2008.

Borrelia burgdorferi is spread through tick bites, thus the first point of entry for the bacteria is the bloodstream. This is the primary place where the immune system response operates, thus leaving the vessels and residing inside the host tissue is a very effective way for bacteria to avoid the immune system entirely. The bacteria have an ideal structure for accomplishing this. B. burgdorferi is a spirochete bacterium with a flagella running through the middle of its body. This allows these bacteria to travel at an average speed of 1636 micrometers per minute with a maximum speed of 2800 microns/min, two orders of magnitude above the speed of a human neutrophils deemed to be the fastest of our mobile cells. This enables the bacteria to not only move very quickly, but also penetrate cells like a corkscrew, and adhere to surfaces due to its large surface area.

B. burgdorferi can interact with endothelial cells in four ways: transiently, dragging, adhering, and burrowing (Norman et al 2008). Most of the interaction (89%) is transient, where the bacteria rapidly cycle through attachment and detachment as they are swept along with the bloodstream. They also spend time dragging (10%), where the bacteria adhere along their length to the endothelium and move more slowly. These two interactions happen mostly along the endothelial cell surfaces, whereas adhesion and burrowing are more common at cell junctions. In adhesion, bacterial cells attach to different aspects of the extracellular matrix. In extravasation, or burrowing, the bacteria corkscrew themselves end first into the endothelium and burst out of the vessels into the surrounding tissue. This is the least common interaction but not only allows the bacteria to evade the immune system, but also gives them access to all other organ systems, including the nervous system and brain.

Because there are a large number of extracellular molecules to interact with, B. burgdorferi makes many receptors and interaction molecules. Most commonly, the bacteria bind to proteins in the extracellular matrix that allow the host cells to adhere, grow, migrate and differentiate. This is because they are essential for the host and are guaranteed to be present. These molecules include: Fibronectin (Fn), Decorin, glycosaminoglycans (GAGs), and laminin (Antonara et al 2011). The bacteria can also bind to integrins, cation-dependent surface receptors present on the surface of all mammalian cells. There are many proteins on the host cells, but the bacteria make many more receptors than are necessary, and they often end up having redundant functions. This overproduction may help the bacteria stay in the cell longer and adhere to a wider variety of cells and animals. Having many slightly different proteins that perform the same function may also function as backups so if the bacteria are identified by one protein, they can discontinue its use and still function normally.
The bacteria can also reside within the host cells. In epithelial cells, the bacteria have been observed living in compartments where they can multiply or remain dormant for many years while avoiding the affects of the immune system and synthetic drugs and tests (Ma et al. 1991).

Two-tier serology is currently the most widely used form of diagnosis for Lyme Disease. However, many patients get false positives and negatives in different parts of this test. To address this, a study by Rebman et al. 2015 focuses on ways to improve this test by addressing individual western blots in this test with variable results. However, specific parts of these immune dependent tests may not be as active as expected because of B. burgdorferi’s ability to down regulate the immune response. Primarily IgG and IgM were investigated as needing potential improvements.

The first, and most obvious, diagnostic is the presence of a bullseye shaped rash at the site of the tick bite. However, the disease has many other ways of manifesting itself. For example, one patient was found to have hearing loss as the sole symptom of infection (Amaro et al. 2015). These variable symptoms may occur because the bacteria are able to resist the initial immune response and travel within the body. These new symptoms have been a key interest for scientists as they expand our knowledge of and attentiveness to the disease’s affects.

Antibiotics are usually administered to treat Lyme Disease. However, just as B. burgdorferi evades the immune system, it is often resistant to our drugs. Although there are many animal models for formulation of antibiotics, none fully recapitulate the human manifestations. Therefore current antibiotics are less affective and further research into the mechanisms of pathology are needed to develop more specific therapies (Borchers, 2015)