Botryococcus braunii displaying cell structure of an individual. From an article in American Society for Microbiology: Eukaryotic Cell.

Botryococcus braunii are unicellular, planktonic, oval-shaped microalgae. The individuals live in a biofilm community that helps contribute to their external hydrocarbon production 3. The extracellular matrix is a complex, three component system that all works together to produce the external hydrocarbons as well as protects each cell 14. The biofilm is so strong so that the cells can withstand drying conditions, as well as extreme temperatures for short amounts of time to allow dispersal to be easier for the organism. The outer layer of cells in the community contains a high number of chloroplasts. B. braunii blooms tend to be toxic to other microbes, plants, and fish populations within the community.
They mainly live in fresh to brackish oligotrophic bodies of water with low nutrient content, and thrive when the amount of dissolved inorganic phosphorus in the water increases. They can tolerate temperature from 40˚ C to -20˚ C for short amounts of times, but prefer around 23˚ C 5. These are fully photosynthetic organisms so they require reasonable access to sunlight to carry out its metabolic activities.

Botryococcus braunii is a eukaryotic organism, meaning it has linear DNA. The genome size of B. braunii depends on the race being examined. There are three races of Botryococcus: A, B, and L. They are classified based on the types of hydrocarbons they produce 1. Race A has a genome size of about 166.0±0.4 Mb (million bases), race B has about 166.2±2.2 Mb, and race L has a larger genome size than its brothers at about 211.3±1.7 Mb 13.
The codon usage of B. braunii was looked at for possible genetic engineering capabilities and showed that unlike most green algae species that have a high content of guanine and cytosine, B. braunii had a much lower number of G’s and C’s 12. The codon usage was closer to bacteria, mammals, and land plants. This means that B. braunii is likely to accept and use genetic material from non-microalgae species with little to no problems 7. After replicating genes from B. braunii, a 3’ (prime) untranslated region of about 1009 bp which is considerably larger than the 3’ UTR of other organisms. This feature most likely contributes to B. braunii’s ability to accept genetic material from non-microalgae organisms.
Analysis of the genome of many strains of B. braunii show that they contain genes that code for squalene synthase and squalene synthase-like proteins that are especially important in the synthesis process that produces their oils. Interestingly enough, squalene is also a key substance that exists in the liver of sharks 13. There is evidence that squalene in sharks has the ability to protect cells which could help to reduce the effects of chemotherapy on cancer patients 9. Because this same chemical found in Botryococcus braunii, there is potential that if this chemical is isolated from the organisms it could also be used for its cancer treatment properties.

The B. braunii organisms live in a community in the form of a complex biofilm matrix that is shaped like a cup that collects the hydrocarbons produced by each cell. A single-celled organism under the prime conditions will start secreting cellulose and pectin that forms the cell membrane of the original cup. After each division, every cell forms a new little pocket that folds inside the original cup all filled with hydrocarbons 4. The Extracellular matrix has a three component system: the individuals have a fibrous cell wall of their own that connects to all the other individuals with cross linked hydrocarbons. The whole biofilm is then covered with a saccharide sheath that the external hydrocarbons bubble out from 13. The outer layer of cells in the community contains a large quantity of chloroplasts and a small amount of starch. The cell wall of Botryococcus braunii is made up of biopolymers that help to distinguish between the three different races of B. braunii. The biopolymers are resistant to chemical degrading not involving oxygen, like acetolysis. The resistive properties lie in very long fatty acid chain derivatives that come from oleic acid. The hydrocarbons produced that are able to be harvested for fuel come from the decarboxylation of these derivatives of oleic acid 2. The hydrocarbons it produces depends on the race of B. braunii. Most of them exist as Triterpenes. It does not require any metabolic starting conditions like nitrogen starvation. It accumulates hydrocarbon under all conditions, but with a variation in speed. The organism was tested to reduce the phosphorus and nitrogen in waste water and was found to produce more hydrocarbons at a 75% dilution 11. 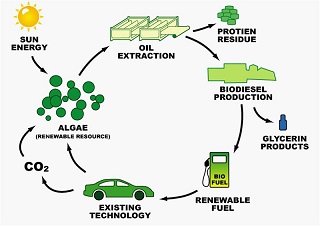 Cycle of the use of Algal biofuel. From an article on Intech: Open Science Open Minds.

As mentioned, B. braunii are cosmopolitan organisms that live in a large range of conditions. They are mainly found in temperate freshwater with very low nutrient content. They can be found mainly in a strong biofilm matrix of only other B. braunii microbes. B. braunii is a major interest in the fuel production industry, because 40-75% of its dry mass is made up of hydrocarbons that are produced in large amounts. These hydrocarbons resemble petroleum at a 90% efficiency rate, and provide raw materials that can be converted into fuel for vehicles like cars and jets 8. Using biodiesel from algae provides many environment-friendly benefits, such as recycling large amounts of CO2 in the atmosphere for their photosynthetic metabolism. The biodiesel from algae also uses the land that is not fit for other biodiesel source crops, as well as break down faster than petro-diesel 10. Algae biodiesel is a great alternative to the production of other biodiesel, and burning of other natural resources. Studies also support the notion that this organism and its ancient relatives are the reason for some of the petroleum reserves from the Ordovician period to now 1. The main problem with this alternative is the global demand of fuel is 90 million barrels a day, and it is insufficient in producing enough fuel to fit the needs of the modern world 6.
This microbe has no pathogenic properties.