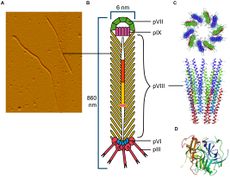 Figure 1: Filamentous phage(s) under an electron microscope (left), an artist's rendition, and some computer-generated models of varying proteins found in the head, neck, and tail fibers.[1] From Gagic D. et al. (2016).

The CTXφ bacteriophage (or sometimes written as CTXphi bacteriophage) is a lysogenic, filamentous, single-stranded DNA (ssDNA) phage that is responsible for turning the previously non-infectious Vibrio cholerae into a highly pathogenic microbe that causes cholera in humans.[2][3][4] This particular bacteriophage,Vibrio virus CTXphi belongs to the family Inoviridae and the genus Affertcholeramvirus. These phages are composed of only 5 viral proteins and are between 1 and 2 microns in length.[5] They resemble something like a cooked spaghetti noodle. (See Figure 1 at right). 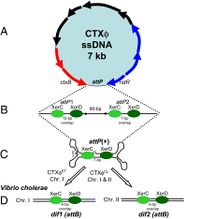 The CTXφ phage can be identified in its host in both its replicative form (when the bacteriophage is in lysogeny, or the lytic cycle), and in its non-replicative form, which is most common. It is in fact extremely rare to find or identify a CTXφ bacteriophage outside a host. This ssDNA phage, when in its lysogenic cycle, integrates its own genetic material in such a way as to form the most stable lysogens.[4] The average size of a CTXφ genome is about 6.9 to 7 kb long and consists of two sections; the RS2 region and the core region.[6] The core contains the genes that code for the Cholera toxin as well as proteins that are assumed to form the outside coat of the phage. The RS2 region is made up of genes that govern DNA synthesis and regulation as well as integration into host cells.[6] 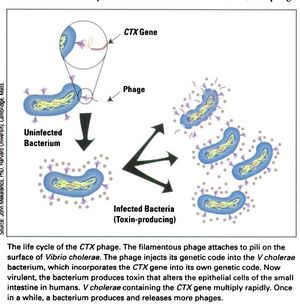 Figure 2: The life cycle of the CTXφ Bacteriophage with Vibrio cholerae as its host.

In a process known as lysogenic phage conversion, the CTXφ bacteriophage integrates, among others, its ctxAB genes into its host, Vibrio cholerae. The ctxAB genes code for a type of exotoxin, called Cholera toxin or just "CT," that causes V. cholerae to switch from being nonpathogenic to highly virulent. For those infected, it is also the primary cause of the large amounts of watered-down diarrhea—cholera's main symptom.[4] After finding a live host and undergoing CTXφ particle adsorption (see Figure 2 at right) to the V. cholerae cell wall, viral single-stranded DNA is then injected into the cell cytoplasm and a complementary strand of DNA is synthesized in order to form a circular plasmid, pCTX,[7]which then integrates into the V. cholerae genome at a site-specific attachment location on one or both chromosomes of V. cholerae.[4] Because the CTXφ phage, like all bacteriophages, only injects its genome, or, more commonly, its prophage, the CTXφ integration makes use of many of the host cell's enzymes. An integrase enzyme is not present in the CTXφ genome, so it recruits XerC and XerD, two tyrosine recombinases present in V. cholerae, to catalyze this merge.[4] (See Figure 3 at left). Normally, XerC and XerD fix chromosome dimers in eubacteria.[8] CTXφ prophages usually integrate as tandem prophages,[9] getting replicated whenever the host cell's genome does. After sufficient time has passed and enough proteins and genetic material has been packaged, he phage proteins are localized to the inner membrane prior to forming virions.[9] Like many other filamentous phages, once emergence from the host cell occurs, it does not require lysis of the host's membrane. It is more of a secretion.[10] Secretion of CTXφ phages from the bacterial cell occurs through a host‐encoded channel, EpsD.[9]

The CTXφ phage contains toxins that are both harmful to human health and some that are essential for the functioning of the CTXφ phage itself.

The epithelial cells of the small intestine contain a receptor called ganglioside GM1. This is a the natural biological receptor for cholera toxin.[11] Once infected with the CTXφ bacteriophage, Vibrio cholerae has the ability to potentially create new ganglioside GM1 receptors in the environment that the bacteria inhabits through an enzyme called sialidase. However, this doesn't seem to work well in humans, as a study in 1976 saw that no new GM1 receptors were created in the cells of intestinal epithelium.[11] Human intestines seem to have some sort of defenses put in place against enzymatic attacks like those from V. cholerae's sialidase.

Recent research suggests that there are perhaps two toxins (other than CT) that are produced from genes of the CTXφ genome. The first of these is accessory cholera enterotoxin, or Ace. Ace is currently thought to be a minor coat protein of CTXφ, though the process by which the toxin could be released from the protein coat is not yet known to scientists. The second non-CT toxin encoded within the CTXφ bacteriophage genome is zonula occludens toxin, or Zot. Zot, though absolutely essential for the production of the CTXφ virion, is not actually present in the phage particle. The part that Ace and Zot play in the virulence of cholera is still unknown.[7]

The CTXφ bacteriophage was a surprising discovery in 1996, especially when cholera is such an old disease; perhaps named in the 16th century and was around before then. Vibrio cholerae is quite harmless on its own, but when infected with the CTXφ phage, the host can become severely dehydrated and die without treatment. This disease is treatable with a class of antibiotics called tetracyclines, which are effective against gram-negative bacteria. Another option for treatment is hydration therapy. Cholera has been overshadowed by other diseases such as the zika virus and HIV/AIDS, but still remains an issue in third-world countries such as Africa and parts of Latin America.