Calcium ion (Ca2+) is an important second messenger involved in many signaling pathways in plants.[1] The concentration of free Ca2+ in the cytosol in a plant cell ([Ca2+]cyt) connects the extracellular stimuli, including the perception of microbe-associated molecular patterns (MAMPs) by pattern-recognition receptors (PRRs), to intracellular responses. Since Ca2+ is neither synthesized nor degraded by plants, [Ca2+]cyt is completely dependent on the entry of external source or the release of Ca2+ from its intracellular stores.[2][3] However, because Ca2+ can react with phosphate, the energy source of life, its presence in the cytoplasm will prevent energy metabolism and other cellular activities from taking place.[4] Thus, its concentration is tightly regulated by various proteins. In plant-microbe interaction, different microbes trigger different receptor proteins, causing distinctive Ca2+ elevation patterns, referred to as Ca2+ signature. Ca2+ signatures can vary in different aspects: amplitude, duration, frequency, spatial distribution, and times of cycle in [Ca2+]cyt changes. The Ca2+ signature produced by PRRs' perception of microbes can be decoded by downstream effectors, changing the expression of defense or symbiosis-related genes, resulting in various different responses by plants.[5] 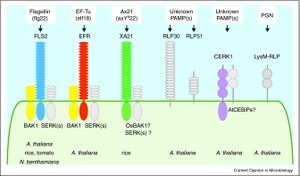 The first step of a Ca2+ signaling event is the perception of microbes performed by PRRs, a type of receptor protein located on the plasma membrane of plant cells. PRRs are capable of recognizing MAMPs, molecules specific to certain classes of microbes that are present in the extracellular space.[6]

An example of PRRs capable of recognizing fungi is the LysM-receptor kinase 5 and chitin elicitor receptor kinase 1 receptor complex, which recognizes chitin in the cell wall of fungi.[10] LysM receptor-like kinases also recognize lipochitooligosaccharide in Myc factors released by symbiotic fungi such as mycorrhizal fungi.[11]

After a PRR precepts microbes, it triggers an influx of Ca2+ ion from outside the cell, resulting in a unique Ca2+ signature.[12] The activated PRR has two mechanisms: it can either trigger the entry of Ca2+ by itself or by activating a downstream receptor. For the first type of mechanism, there are two possibilities. The first possibility is that it can form a complex with the Ca2+ ion channels on the membrane physically and regulate the activity of the channels. The second possibility is to produce a signaling molecule by itself to bind to Ca2+ permeable channels or Ca2+ pumps and activate them. The other mechanism is to activate a downstream receptor-like cytoplasmic kinase (RLCK).[5] Many of the PRRs activate BIK1, a RLCK which activates a NADPH oxidase called RBOHD by phosphorylating it. Activated RBOHD produces reactive oxygen species (ROS) such as H2O2, and the ROS interacts with Ca2+ channels and causes an influx of extracellular Ca2+, although the precise mechanism is not known.[13] The increase in [Ca2+]cyt can then trigger the release of Ca2+ from internal sources, further increasing [Ca2+]cyt.[5]

When PRR detects the presence of nod factors or myc factors, Ca2+ signaling in both cytoplasm and nucleus can happen.[14] The influx of Ca2+ into nucleus is mediated by both Ca2+ channeling proteins and ATP-powered Ca2+ pumps located on the nucleus membrane, and the influx of Ca2+ into cytoplasm is likely caused by the interaction of ROS with channel proteins.[14][15] 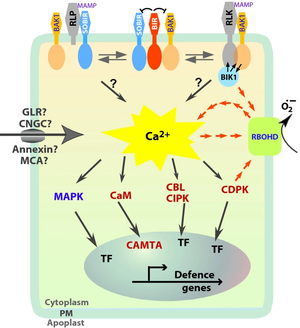 As [Ca2+]cyt changes, the Ca2+ signature is decoded by Ca2+ sensor proteins.[5] There are various types of sensor proteins in plants that can bind to Ca2+ ions, and they respond to the rise in [Ca2+]cyt in two different ways. The first possible type includes Calmodulin (CaM) and CaM-like proteins (CMLs). Binding to Ca2+ changes their structures and enables them to bind to their targets, calcineurin b-like proteins (CBLs). CBLs then interact with CBL-interacting protein kinases (CIPKs), enzymes that are capable of phosphorylation.[16] The second possible way a sensor can decode the Ca2+ signature is that the sensor has a kinase domain of its own and can phosphorylate other molecules directly. An example of this type of sensor is Ca2+-dependent protein kinases (CDPKs or CPKs).[16]


Ca2+ signal as a negative regulator

Although Ca2+ has been evolved to be utilized as a ubiquitous secondary messenger in plants, it is, by its nature, still a toxin, and long-term exposure to high Ca2+ levels can eventually lead to harm, and even death, to plant cells. So, Ca2+ ions’ presence in the cytoplasm needs to be removed after the signaling event. In fact, Ca2+ signal can also act as a negative regulator that down regulates the influx of Ca2+. It can down regulate it from two processes: formation of Ca2+ signature and decoding of Ca2+ signature.

In the formation of the Ca2+ signature, some CPKs can bind to BIK1 and phosphorylate it, thus promoting its degradation. Because BIK1 is directly downstream of many of the PRRs, and because it promotes ROS production, the degradation of BIK1 basically stops ROS-dependent defense signaling in plants.[19] What’s more, some Ca2+-modified CaM can bind to Ca2+ channel proteins, such as cyclic nucleotide-gated ion channels (CNGCs), leading to their inactivation, preventing the Ca2+ influx and preventing the Ca2+ signature from forming.[20]

In the decoding of the Ca2+ signature, some transcription factors bound by Ca2+-modified CaM actually suppress the expression of defense-related genes of plants, such as the CaM-binding transcriptional factor 3 (CaMTA3), which suppresses the expression of both EDS1 and NDR1, proteins required for the activation of plant defenses, by binding to their promoters.[5]

Ca2+ signaling plays an important role in the plant-microbe interaction. PRRs are capable of detecting different classes of microbes, leading to a series of phosphorylation events by themselves or downstream effectors, causing the influx of Ca2+, and generating the Ca2+ signature. The Ca2+ signature is then decoded at both post-translational and transcriptional levels. It also negatively regulates the influx of Ca2+. However, little is known about how different patterns of Ca2+ signature correlate with external stimuli and how they lead to effective immune responses to pathogen infection, and there are still plenty of areas for further research.