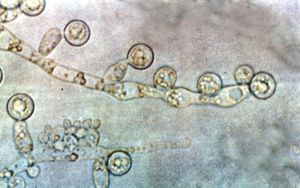 C. albicans is a diploid fungus populating the human body worldwide, inhabiting 80% of everyone's intestinal tract, colon, and mouth with no problems. It is unusual in that it is polymorphic, meaning it can grow as both a yeast and as filamentous cells. It is a popular cause of oral and vaginal infections ("thrush") , but is easily treated with common anti-fungals in people who are not immunocompromised.

C. albicans can take on either a unicellular (yeast) or multicellular (hyphae, pseudohyphae) form. The yeast form is 10-12 microns across, and is Gram-positive. A transcription repressor is needed to maintain the yeast state. While multicellular, the pseudohyphae are formed by yeast buds that attach to one another. Spores form on the pseudohyphae called chlamydospores [1]. C. albicans can create a biofilm as it becomes multicellular. The biofilm is made primarily of cellulose, but also contains polynucleotides, polypeptides, and fibrinogin [2]. The form it takes depends on environmental cues, switching to the hyphae phase based primarily on temperature and pH changes.

Additionally, C. albicans can switch between different phenotypes. The change is spontaneous and reversible, though possibly controlled by regulatory gene expression. In one form, the microbe is white, round cells in smooth colonies; the other form is opaque, rod-shaped in flat, gray colonies. Antigen expression is also changed, and the two forms have affinities for different tissues. This flexibility makes it highly adaptable as environments change [3]

The microbe is asexual, and does not perform meiosis. However, the diploids undergo parasex, meaning that diploid cells of opposite mating types (different from the characteristic male/female form) perform cell fusion to create a tetraploid. This unit then undergoes a split to return to a diploid state. While splitting, chromosomes are randomly lost. Chromosomes are not typically exchanged, though some gene conjugation does occur to provide genetic diversity [4]. For efficient mating, the microbes must switch from their white form (white and rounded cells forming dome-shaped colonies) to the opaque form (opaque, elongated cells forming a flatter colony). The opaque form is ~10E6 more efficient for mating than the white form [5] 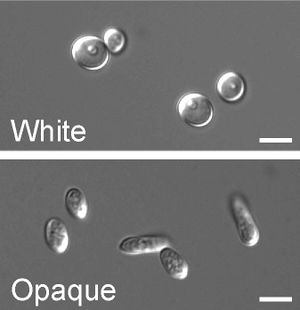 Candida albicans in white- and opaque-phase.

This microbe is found naturally in the human body, primarily in the intestines, colon, and mouth. It is normally commensal of humans but can be pathogenic if a person's immunity is lowered or there is a change in natural flora or physiology. It mostly attacks the skin or mucosae, but can also invade the lungs, blood, or heart in extreme episodes. It invades tissue by puncturing skin with its hyphae. If nutrients are in high supply, spores are produced and the population can double in an hour. Fluconazole is a popular treatment for systemic, oral, or vaginal infections; OTC treatments can also be used. Amphoterican B, applied intraveneously, is given to those with a severely weakened immune system [6]. Biofilms can grow on implantable medical devices. An increase in hospital-acquired infections has become a major concern.

[2] "Understanding the Structure of Candida, Yeast, and Fungi". http://www.yeastinfectionadvisor.com/structureofcandida.html

[4] Forche, A., Alby, K., Schaefer, D., Johnson A. D., Berman, J., and Bennett, R. "The Parasexual Cycle in Candida albicans Provides an Alternative Pathway to Meiosis for the Formation of Recombinant Strains", http://www.plosbiology.org/article/info%3Adoi%2F10.1371%2Fjournal.pbio.0060110

Page authored by Scott Foss, student of Mandy Brosnahan, Instructor at the University of Minnesota-Twin Cities, MICB 3301/3303: Biology of Microorganisms.