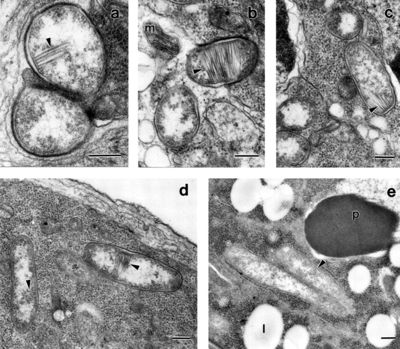 ‘Candidatus Cardinium’ is a bacterium from the Bacteriodetes group. It is involved in reproduction alterations of arthropod host organisms including cytoplasmic incompatibility, parthenogenesis, and feminization.[3]

Current research has shown 'Cardinium' to be an endosymbiot capable of altering host sexuality, resultant offspring as well as possible antibiotic resistance. Research on this microbe is still in its infancy but further research could help explain the natural endosymbiotic flora of arthropods. [5]

‘Candidatus Cardinium’ has linear 1364 bp DNA sequence. There are 3 main varieties of Cardinium which differ in their 16s rRNA sequences.

FIG. 4. Relationship of Cardinium groups A, B, and C. Each rectangular box represents a Cardinium group. Identities of 16S rRNA gene nucleotide sequences (1,447 or 1,448 bp) and in GyrB amino acid sequences (286 aa) are indicated on the lines which connect the groups. The nucleotide or amino acid identities were calculated with Genetyx version 9.1 software (Genetyx Corporation, Tokyo).[2]

'Cardinium' exists as both a rod and circular shaped bacterial endosymbiot 0.3 - 2.1µm in length with microfilament-like structures extending from the body. It is transmitted vertically from mother to offspring and enhances its own transmission by altering the host biology causing feminization that is possibly functional for males as well as parthenogenesis. Like other endosymbiots, it may add to the fitness of the host organism by supplying nutrients, adding heat resistance or otherwise reduce possibly predation. It has been hypothesized that it confers a slight insectiside resistance to the host. [6]

When 'Cardinium' infects a male host, it has the capacity to kill, functionally, or genetically convert the organism to a female during microbe development. In the case of a genetic conversion, infected males who mate are able to produce very few offspring due to cytoplasmic incompatibility. [7]

This bacteria is located within the reproductive tissues of the host organism. Commonly found in arthropods, mites and spiders. Nearly 7% of all arthropods and 30% of all mites and spiders contained this microbe as a member of its endosymbiotic flora.

Often transmitted from mother to daughter.‘Candidatus Cardinium' has the capacity to feminize the host organism. Feminization can be functional or genetic alone. In some cases, it has been shown to increase fecundity of the female host. This endosymbiont does not appear to have a negative effect on the host. It has been hypothesized that it confers a slight insectiside resistance to the host. [8]