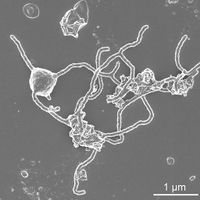 MK-D1 was isolated from deep-sea methane seep sediment of the Nankai Trough at 2533 m water depth, off Kumano area, Japan.

From deep-sea sediments to a bioreactor-based “pre-enrichment” and a final seven-year in vitro enrichment Hiroyuki Imachi dubbed the newly cultured and isolated Lokiarchaeon, “Candidatus Prometheoarchaeum syntrophicum strain MK-D1”. Current data suggest that this archaeal lineage known as "Asgard archaea" may have given rise to eukaryotes (Spang A. et al. 2015). Although a resemblance of eukaryote-like genomic features have been discovered in these archaea, the evolutionary transition from archaea to eukaryotes remains uncertain due to the lack of cultured representatives and corresponding physiological insights. Given the proposed eukaryote-like intracellular complexities for Asgard archaea, the MK-D1 isolate has no visible organelle-like structure. Morphological features of Candidatus Prometheoarchaeum syntrophicum are of unique complexity; long and branching protrusions.

Figure 4. Phylogeny of MK-D1 and catabolic features of Asgard archaea.

The MK-D1 cell envelope may be composed of a membrane and a surrounding S-layer, given the presence of four genes that encode putative S-layer proteins, stalk-like structures on the surface of the vesicles, and the even distance between the inner and outer layers of the cell envelope

The evolutionary relationship between archaea and eukaryotes has been under debate, contingent upon the incompleteness and contamination associated with metagenome-derived genomes and variation in results depending on tree construction protocols (Da Cunha et al. 2018). By isolating strain MK-D1, a closed genome was obtained along with a ribosomal protein-based phylogenomic tree that shows clear phylogenetic sistering between MK-D1 and Eukarya (Fig. 4a). These result suggest strain MK-D1 represents the closest cultured archaeal relative of eukaryotes. We confirmed the presence of many ESPs identified in related Asgard archaea (Supplementary Fig. S5) and obtained the first RNA-based evidence for expression of such genes. 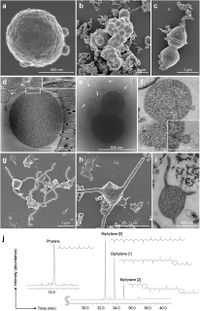 MK-D1 can degrade amino acids anaerobically, this has been confirmed by monitoring the depletion of amino acids during the growth of pure co-cultures. Cell aggregates of MK-D1 incorporate amino-acid-derived nitrogen, demonstrating the capacity of MK-D1 to utilize amino acids for growth. Notably, the 13C-labelling of methane and CO2 varied depending on the methanogenic partner, Methanogenium, indicates that MK-D1 produces both hydrogen and formate from amino acids for interspecies electron transfer. The syntrophic partner was replaceable—MK-D1 could also grow syntrophically with Methanobacterium sp. strain MO-MB121 instead of Methanogenium (Fig. 2b–e). Although 14 different culture conditions were applied, none enhanced the cell yield, which indicates specialization of the degradation of amino acids and/or peptides.

The MK-D1 genome only encodes one hydrogenase (NiFe hydrogenase MvhADG–HdrABC) and formate dehydrogenase (molybdopterin-dependent FdhA), suggesting that these enzymes mediate reductive H2 and formate generation, respectively. MK-D1 represents the first cultured archaeon that can produce and syntrophically transfer H2 and formate using the above enzymes. Most of the identified amino-acid-catabolizing pathways only recover energy through the degradation of a 2-oxoacid intermediate (pyruvate or 2-oxobutyrate; Fig. 2a and Table 4). MK-D1 can degrade 2-oxoacids hydrolytically (through 2-oxoacid-formate lyases) or oxidatively (through 2-oxoacid:ferredoxin oxidoreductases) to yield acyl-CoA intermediates that can be further degraded for ATP generation. In the hydrolytic path, the carboxylate group of the amino acid is released as formate that can be directly handed off to partnering methanogenic archaea or SRB. In the oxidative path, 2-oxoacid oxidation is coupled with release of amino acid carboxylate as CO2 and reduction of ferredoxin, which can be re-oxidized through H+ and/or CO2 reduction to H2 and formate, respectively (through electron-confurcating NiFe hydrogenase MvhADG–HdrABC or formate dehydrogenase FdhA). On the basis of 13C-amino-acid-based experiments, MK-D1 has been indicative of switching between syntrophic interaction through 2-oxoacid hydrolysis and oxidation depending on the partner(s).

Based on cultivation and genomics, the “Entangle-Engulf-Enslave (E3) model” for eukaryogenesis through archaea-alphaproteobacteria symbiosis mediated by the physical complexities and metabolic dependency of the hosting archaeon has been proposed.

Two routes may be possible: acquisition of aerobic respiration (electron transport chain and terminal oxidases) or an O2-utilizing endosymbiont. Hiroyuki Imachi et al. hypothesizes that the ancestral Heimdallarchaeon (or specific sub-lineage) adopted the former route (Fig. 4b) and the pre-last eukaryotic common ancestor (LECA) archaeon took the latter. Prior to endosymbiosis, the pre-LECA archaeon likely interacted with SRB and O2-utilizing organotrophs, who maintained the local habitats O2 concentrations low (Fig. 5b). The O2-utilizing partner was likely a facultative aerobe capable of aerobic and anaerobic H2-generating organotrophy. In this three-member interaction, the SRB could syntrophically scavenge H2 from both the pre-LECA archaeon and facultatively aerobic partner. The dynamic oxic-anoxic-adaptable symbiosis could have strengthened the three-member interaction and physical association.

Given the structure of extant eukaryotic cells, it is logical to presume that the pre-LECA archaeon engulfed their metabolic partner. Although a phagocytosis-like process has been previously proposed (Zaremba-Niedzwiedzka, K. et al. 2017), the observed MK-D1 cells are too small to engulf their metabolic partner in this way, Asgard archaea lack phagocytotic machinery (Burns, J. A. et al. 2018), and a pre-mitochondriate organism lacks sufficient energy to perform phagocytosis36. Based on the observation of unusual morphological structures of MK-D1 cells (Fig. 3 and Fig. 2), the pre-LECA Asgard archaeon may have produced protrusions and/or MVs (Fig. 5b). For an archaeon syntrophically growing in a narrow space (e.g., sediment pore), it may have been possible for the protrusions/MVs to fuse and inadvertently surround its partner, resulting in phagocytosis-independent engulfment (Fig. 5c).

There are many possible triggers for membrane fusion, including mechanical stress, electric current, or even evolution of membrane-fusing proteins Cevc, G. et al. 1999). Unlike phagocytosis, such a process would assimilate the partner and simultaneously form a chromosome-bounding membrane structure topologically similar to that of the eukaryotic nuclear membrane (Fig. 5d), a scheme similar to the “Inside-out model” presented by Baum and Baum (2014).