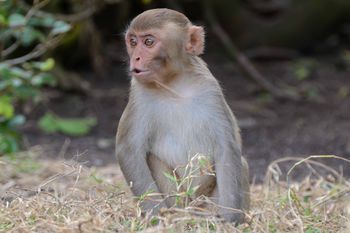 A juvenile Macaca mulatta, more commonly known as a rhesus macaque monkey. The natural host for the Herpes B virus.
By Geoff Gallice in Punta Santiago, Puerto Rico.

Out of the 35 herpesviruses that have been identified in nonhuman primates, only Cercopithecine herpesvirus 1, also known as Herpes B or B virus, has been identified as pathogenic for humans (5). Because of the B virus’s prevalence in macaques and other biomedical research animals, study of the B virus is important for several reasons. These reasons include understanding how it functions and whether or not it skews the results of any kind of biomedical testing, its interspecial and intraspecial transmission abilities, and its potential harm both to its regular hosts and less common hosts, such as humans (7).

Due to the extremely dangerous nature of this virus and the rarity of human infection, little research has been conducted on Herpes B, especially since personal protective gear requirements have been updated and strengthened over recent decades in biomedical testing centers throughout the United States. Much of what is known about Herpes B, therefore, has been found through comparison with HSV1 and HSV2 (5). It's viral biology closely follows HSV1, and so does the way that the infection presents itself in its natural host, the macaque. However, when transferred to humans, the virus is fatal more often than not, and steps must be taken to ensure human safety.

The family of herpesviruses has been divided into three main categories: Alphaherpesvirinae, Betaherpesvirinae, and Gammaherpesvirinae. The three categories were originally separated based on biological and molecular properties of the viruses. The α-herpesviruses, of which Herpes B is a member, generally initiate infection in mucosal epithelial cells. They locally replicate, and later invade sensory neurons. It is here that they form a latent infection in ganglia near the area of inoculation. Most α-herpesviruses also replicate quickly compared to the other two categories. In species that are not their natural hosts, the α-herpesviruses can produce disease with neurological involvement (7). Because of these dangers regarding cross-species infections, the α-herpesvirus group is potentially a substantial problem in using nonhuman primates as biomedical models of human disease. Herpes B is the only one herpesvirus that has been identified so far that is a pathogenic for humans (5). It was also the first nonhuman primate herpesvirus to be identified (8). 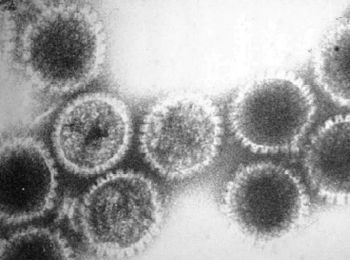 Electronmicrograph of Pseudorabies virus, subfamily Alphaherpesvirinae, and of very similar structure to Herpes B. By George W Beran, 1985. Source.

Herpes B is a large, double stranded DNA virus that has a structure typical to herpesviruses. This includes an amorphous tegument protein layer and lipid envelope studded with viral glycoproteins which surrounds the icosapentahedral capsid structure, which in turn surrounds electron dense core with viral DNA (5). The genome sequence of the standard vaccine for Herpes B has been sequenced by several laboratories. In addition, sequences for many single genes that came from field isolates of Herpes B have been found. The DNA genomes of simian α-herpesviruses are high in G+C content. Herpes B tops this list, with 74.5% of its content being cytosine and guanine (3). In addition, the genomes of simian viruses have been found to be very similar to the genomes of HSV1 and HSV2.

B Virus in Non-Human Primates

In macaque monkeys, who are the natural host for Herpes B, severe disease resulting from Herpes B infection does not commonly occur. In fact, infection of Herpes B in macaques causes symptoms that are similar to those caused by HSV-1 and HSV-2 in humans (5). However, Herpes B can still be dangerous in macaques with immunodeficiencies (1).

It has been found that most Herpes B infections in monkeys are acquired through routes other than venereal exposure, as is usually assumed in Herpes infections. The virus most commonly appears to be transmitted through biting and scratching (6). This method requires direct inoculation of virus by transferring of the infected monkey's saliva into the receiving monkey's bloodstream. This information is important when attempting to create Herpes B-free research colonies derived from infected groups, and illustrates that focusing on pubertal age or breeding opportunities will not solve the problem because it is not a sexual problem (6). Biting and scratching, while more common at a young age, can exist between animals both young and old and is a common form of light violence that monkeys may use to exert their dominance and maintain the social structure of the colony (6). Transmission of Herpes B does not appear to happen through vertical gene transfer, but can occasionally happen through an infant's contact with its mother after birth (3).

The majority of macaques infected with the B virus do not show obvious clinical signs of the disease. Occasionally, orofacial or genital lesions are prominent enough to be seen without thorough examination of the animal (3). Replication of the virus occurs at the mucosal site of the infection, which triggers an immune response in the host that results in both antiviral antibodies and cell-mediated immune responses.

The most common course of infection is the virus becoming latent in neurons of sensory ganglia which are working in the site of the infection. During the latent period, the virus does not replicate and is protected from the immune response of the host. This stage can last for life. When latency is followed by progression to generalized infections throughout the body, the infection often becomes fatal, even in its natural host (3).

B Virus in Humans 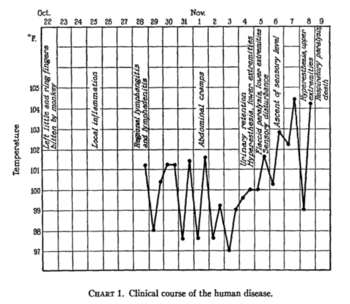 Clinical course of the first documented case of Herpes B in humans.
Sabin, A. B., & Wright, A. M. (1934). ACUTE ASCENDING MYELITIS FOLLOWING A MONKEY BITE, WITH THE ISOLATION OF A VIRUS CAPABLE OF REPRODUCING THE DISEASE. The Journal of experimental medicine, 59(2), 115-136. Source

On October 22nd, 1932, a Dr. W. B. was engaged in experimental work on poliomyelitis when he was bitten on the dorsum of the left ring and little fingers by a Macacus rhesus monkey who appeared normal. The superficial wounds were treated with iodine and alcohol. Three days later, however, Dr. B. was experiencing pain, redness, and slight swelling at the wound sites. By October 28th, he was admitted to the hospital with lymphangitis and a 101.4 degree fever. After a tetanus antitoxin injection had been administered and he appeared to improve in health, he obtained stomach cramps. By November 4th, he had hyperesthesia of the lower extremities and urinary retention. Over the next few days paralysis moved upwards from the lower extremities. Soon he had paresthesias in the upper extremities, a 104.8 degree fever, and he was put on a respirator for a diminishing respiratory rate. After a convulsion with laryngeal spasm, he lost consciousness and developed pulmonary edema. Despite medical support, he died on November 8th, just 18 days after receiving the bite (8).
This case was later found to be the first documented infection of Herpes B in a human. The virus was isolated from the brain, spinal cord, and spleen postmortem (7, 8).

Since the original case in 1932, there have been a number of additional human infections. Though the infections are not common, they are well known in the biomedical research field because of their severity. Most human cases have been linked to bites or scratches from a macaque, but other cases have been traced back to needlestick injuries, contamination of open wounds with macaque cells in the laboratory, and the splashing of macaque bodily fluids such as urine into the eye (5). 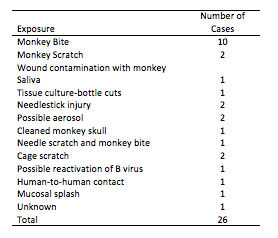 Documented Cases of B virus in Humans as of 2002.
Source

When left untreated, infection in humans causes a 70-80% fatality rate, and those who do survive are left with serious neurologic deficits. Due to the increasing availability of antiviral drugs and immediate prophylactic treatment of those exposed to Herpes B, the survival rate is increasing.

The main setting for human exposure to Herpes B is in the biomedical research field. Nonhuman primates are commonly used in biomedical research because they are genetically, anatomically, and physiologically similar to humans (5). In this field, humans often come in direct contact with macaques as well as their tissues and their fluids. Analyzing cases of B virus has led to the conclusion that certain types of exposures may result in greater risks of contracting the infection. These more dangerous types include exposures via deep puncture wounds that are difficult to clean, wounds that are not cleaned properly, and wounds sustained to the face due to the infection's ability to quickly penetrate the central nervous system (2).

Prior to exposure, individuals are advised to wear personal protective equipment (PPE) that correlates to the level of exposure they may be making themselves susceptible to. In many current primate labs where Herpes B is known to exist, this PPE often includes a face mask, face shield, scrubs and shoes that do not leave the facility, shoe covers, sleeves, and one or more layers of gloves. This protection makes it very difficult for the virus to enter the human host because most of their skin is covered. In the first few minutes after exposure, a thorough cleaning of the wound or mucosa is the most important action that can be taken to reduce the risk of infection. Eyes or mucous membranes should be rinsed for at least 15 minutes with water or a saline solution. Exposed skin should be washed with povidoneiodine, chlorhexidine, or detergent soap for at least 15 minutes also. These harsher solutions are damaging to mucosal areas but work well with skin because they are able to destroy the virus's lipid envelope and inactivate the virus (2). Depending on the severity of the exposure, the exposed individual may choose to take an antiviral medication directly after exposure, even though they will show no symptoms at the time. This is called a postexposure prophylaxis, and even though it has been seen to be an effective in rabbits experimentally inoculated with B virus, it has not yet been proven to be effective in humans (2).

While other primate α-herpesviruses are Risk Group 2 pathogens and can be studied under Biosafety Level 2 containment, Herpes B is classified as a Risk Group 4 pathogen (3). This requires very high levels of Biosafety Level containment, and is partially responsible for the lack of research so far conducted on the Herpes B virus. Biomedical research centers are attempting to eradicate Herpes B from their animal populations, and with decreasing numbers, it becomes less prominent a research topic. In addition, because Herpes B is so dangerous in humans, there has been little to no study done on infection in humans.


Edited by Alexis Boone, a student of Nora Sullivan in BIOL168L (Microbiology) in The Keck Science Department of the Claremont Colleges Spring 2014.