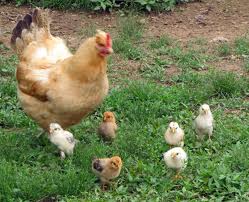 Gallus gallus domesticus, the species most commonly infected with Chicken Anemia Virus. Young chicks with undeveloped immune systems are the most vulnerable to CAV. [1]. 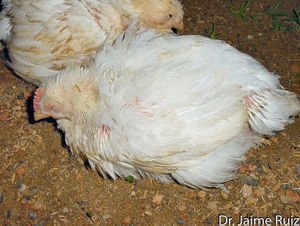 Chicken Anemia Virus (CAV), is the cause of a disease refered to as called Blue Wing Disease, Infectious Chicken Anemia, and Chicken Anemia Agent. Afflicted birds lose bone marrow density, become anemic, and have suppressed immune systems. It is a vertically transmitted circovirus, usually from a parent flock. Thanks to widespread vaccination, the clinical disease is uncommon today. Subclinical infection, where birds are asymptomatically carrying the virus, still occurs often [3].

Symptoms of CAV include pale extremeties such as wattle, comb and legs, anorexia, weakness, cyanosis, lethargy and sudden death. Neurological symptoms include dullness, depression, and paresis. Severely sick birds may die within 2 to 4 weeks, while survivors are usually stunted [1].

CAV suppresses the immune system and makes survivors highly susceptible to other infections. Though mortality from CAV is not especially high, later death due to bacterial infection is economically significant. Individuals who survive Chicken Anemia Virus are at high risk of falling fatally ill by an otherwise simple bacterial infection later in life [2, 3].
This virus affects both meat and egg-type chickens, and is most rampid among commercially produced chickens. Disease most often occurs and is most lethal during the first three weeks of life. Chickens of any age may be infected via oral and respiratory routes, but their mature immune systems are much more resistant. An individual infected with CAV will be a life-long carrier [2].

A particularly interesting aspect of Chicken Anemia Virus is its symptom of depression. The presence of depression in non-human mammals is disputed, and hardly found in animals beyond mammals. However, CAV is consistently seen to incite behaviors indicative of depression. Lethargy, social isolation, loss of appetite, and mental dullness are the most highly reported symptoms [1, 3]. The onset of depression implies that CAV may have greater effects beyond bone marrow atrophy and immunosuppression- it is a neurological infection as well.

The Chicken Anemia Virus presents the possibility of learning about avian depression. To confirm mental depression outside of the class mammalia may lead to a greater understanding of the affliction. Because of their abundance, ease of obtaining, and our comprehensive knowledge of them, common chickens would be a great model system for research regarding depression.

Chicken Anemia Virus has three open reading frames (ORF), VP1, VP2 and VP3, which code for the three viral proteins. VP1 is the capsid protein of CAV. VP3 is responsible for inciting apoptosis. VP2 is a multi-purpose protein. VP2 works partially to aid VP1 in the capsid structure and strength [4].Though the exact mechanism of VP3 is unknown, it is likely that VP3 is highly attracted to chromatin, binds to it, and disturbs the tightly-coiled structure [5]. Only VP1 can be isolated in a cell-culture [6].
Due to it's apoptotic capabilities, VP3 may be a candidate for cancer treatment research [1].

The CVA virion is a non-enveloped icosahedral structure 23-25nm in diameter.
This virus is especially hearty, as it has proven resistant to high temperature, acidic pH, chloroform, and commercial disinfectants. It can be destroyed with hypochlorite and iodophor [1].

Reproductive Cycle of CAV in a Host Cell

1. Chicken Anemia Virus is suspected to enter the cell via cell surface binding (specific binding sites are not known)
2. Using the machinery of its dividing host cell, CAV first creates a double stranded replication DNA, and then replicates it. The exact mechanism of this replication is not known, but is suspected to be rolling circle replication.
3. Viral DNA enters a multitude of host cells, and rapidly transcribes.

Further reproduction of CAV is not yet understood. 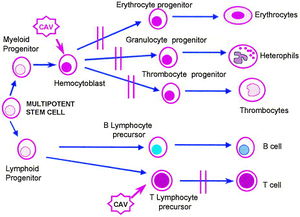 Immunopathogenesis of Chicken Anemia Virus. Hemocytoblasts in the bone marrow, and T cell progenitors in the thymus are the CAV's key targets. [3].

The Chicken Anemia Virus is most often transmitted from mother to offspring before hatch. Viral DNA has been located in the ovaries of infected hens [6]. The infected mother will pass the virus on via the egg shell, though which CAV will penetrate.

Chicken Anemia Virus is primarily effective by targeting lymphoid progenitor cells (B and T cells) in the thymus and red blood progenitor cells in the bone marrow. Damaged erythroid cells in bone marrow result in the severe anemia so characteristic of CAV. Specifically, it is the ruin and removal of hemocytoblasts in bone marrow that incites anemia. Production of red blood cells drops dramatically, resulting in anemia. A loss of thrombocytes and granulocytes also results from the damaged erythroid cells.
The depletion of lymphocytes equates to immunosuppression. With fewer B and nearly no T cells, the individual is highly susceptible to infection. This explains why CAV fatality is often due to an unrelated bacterial infection [5].

While the symptom of depression in chickens afflicted with Chicken Anemia Virus has been reported by many different owners, the pathology is not known. Considering what is known about the pathology of CAV, it is likely that this is not depression stemming from a chemical imbalance in the brain. It may be best described as the "chicken blues." Just as a human feels sad when he/she has been sick for a long time, chickens with CAV may be exhibiting complex signs of emotional sadness.