Chlorhexidine is used as a prescription mouthwash to fight gingivitis and periodontists [4]. Chlorhexidine is the most thoroughly researched antimicrobial agent used in dentistry in terms of ability to control cariogenic activity [10]. It is effective in reducing plaque and gingivitis in teeth and gums but can causes an alteration in taste and some discoloration of teeth [4]. Originally Listerine was the most commonly used mouthwash to prevent plaque buildup, but research into other types of mouthwashes lead to the use of chlorhexidine as a form of treating periodontist and gingivitis, as it was found to be the most effective in reducing plaque and gingivitis [1].

Chlorhexidine works by modifying the permiability of the cell membrane and either stops bacteria from reproducing or kills them [10]. Though chlorhexidine mouthwash is the most studied there are other forms it can be used in such as varnishes and gel, each having its own benefits [10]. There are also alternatives to chlorhexidine which have similar effects on oral bacteria but without negative side-effects [4] [7]. 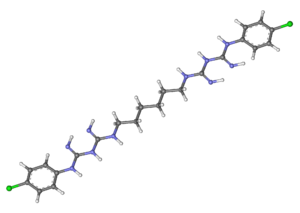 Figure 1.Ball and stick model of Chlorhexidine By MarinaVladivostok (Own work) [CC0, via Wikimedia Commons] 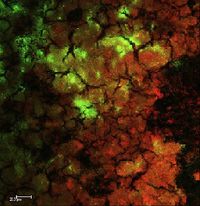 Figure 2. Biofilm treated with chlorhexidine on a tooth. By Ronald Ordinola Zapata (Own work) [CC BY-SA 3.0 (http://creativecommons.org/licenses/by-sa/3.0), via Wikimedia Commons]

Chlorhexidine is an antimicrobial agent that alters the composition of microorganisms [10]. Chlorhexidine reduces the proportions of some microorganisms which are especially sensitive to this substance [10]. Chlorhexidine works by altering the metabolic activity of bacteria [10]. In lower concentrations Chlorhexidine is bacteriostatic, essentially preventing bacteria from reproducing, and prompts both changes in functioning of the cell membrane as well as leakage of the intracellular components [10]. In high concentrations Chlorhexidine acts as a bactericide causing precipitation of the cellular content and inhibits the action of the glycosyltransferase enzyme which is responsible for the accumulation of bacteria on the dental surface and has effects on sugar transport and acid production in oral bacteria [10].

Effects of Different Forms of Chlorhexidine

The main advantage of the gel over mouthwash is that it prolongs the bioavailability of chlorhexidine [5]. A review on the literature of chlorhexidine gel at 0.2%, 0.5%, 1% , and 5% were studied [10]. Of these gels 0.2%, 0.5%, and 1% were applied with a toothbrush, while 1% and 5% gels are applied through professional prophylaxis and trays [9]. Chlorhexidine gel significantly decreased Streptococci mutans levels for a period of 4-26 weeks after intense treatment which included 3-4 daily applications for 2 days or through daily applications for periods of 10 and 14 days [10]. In another study conducted comparing the effectiveness of 0.12% chlorhexidine in mouthwash and 0.2% chlorhexidine in gel it was found that the gel had a lower incidence of alveolar osteitis than the mouthwash, 7.5% versus 25% [5].

Though chlorhexidine is an effective way of treating periodontal diseases it does have negative side effects namely bad odor, a slight staining in teeth, and a change in taste perception [3] [4].Chlorhexidine reduced the taste intensity of NaCl to 35 ± 5% and quinine HCl to 50 ± 8% of pretreatment strength [3]. There was no effect on sucrose; the mean posttreatment intensity was 97 ± 5% of pretreatment but citric acid intensity increased to 139 ± 13% [3].There have studies that found alternatives which work just as well as chlorhexidine without the negative effects.

Triphala is a combination of three different plant extracts (Amalaki, Bibhitaki, and Haritaki). used in a mouthwash to treat diseases because of its antimicrobial and antioxidant properties [9]. Triphala was found to be as effective as 2% chlorhexidine in treating plaque [9].

The plant extract of Terminalia chebula was compared with chlorhexidine to see if it would be a good alternative to treat dental caries, gingivitis and stomatitis [4]. There was a significant decrease in plaque in both the chlorhexidine group and Terminalia chebula [4]. There was no significant difference between both group and both reduced plaque buildup and gingivitis [4].

Though chlorhexidine has its benefits it might also cause heart disease. In a study conducted in 2013, they used mouthwash which contained chlorhexidine to suppress oral microbes to determine if it affects systemic nitrite levels and blood pressure in healthy individuals, as nitrite is found to be a precursor for systemic generation of vasodilatory nitric oxide, and external administration of nitrate reduces blood pressure in humans [6].

7Kulkarni, V. V., and S. G. Damle. "Comparative Evaluation of Efficacy of Sodium Fluoride, Chlorhexidine and Triclosan Mouth Rinses in Reducing the Mutans Streptococci Count in Saliva : An in Vivo Study." Journal of the Indian Society of Pedodontics and Preventive Dentistry 21.3 (2003): 98. Web.

9Naiktari, RS, et al. "A Randomized Clinical Trial to Evaluate and Compare the Efficacy of Triphala Mouthwash with 0.2% Chlorhexidine in Hospitalized Patients with Periodontal Diseases." JOURNAL OF PERIODONTAL AND IMPLANT SCIENCE 44.3 (2014): 134-40. Web.

10Ribeiro, Luciana Gazaniga Maia, Lina Naomi Hashizume, and Marisa Maltz. "The Effect of Different Formulations of Chlorhexidine in Reducing Levels of Mutans Streptococci in the Oral Cavity: A Systematic Review of the Literature." Journal of dentistry 35.5 (2007): 359-70. Web.

Edited by (Martha Serrano), a student of Nora Sullivan in BIOL168L (Microbiology) in The Keck Science Department of the Claremont Colleges Spring 2015.