Clostridium piliforme is a pathogenic bacteria discovered by Ernest Edward Tyzzer in 1917 and is the pathogen responsible for Tyzzer's Disease.[1] 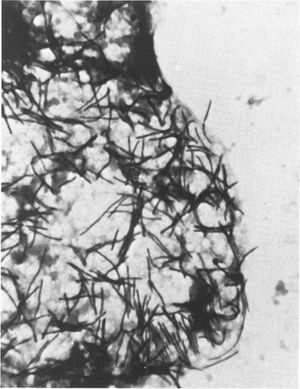 Clostridium piliforme, formerly known as Bacillus piliformis, is a large (0.2-5 μm) gram negative filamentous rod shaped bacteria. It is a member of the family Clostridiaceae. It is an intracellular, spore forming, obligate anaerobe. C. piliforme is motile in nature and highly pleomorphic.[1]

Due to normal staining procedures producing weak results, confirmation of the bacteria is usually done with silver impregnation or Giemsa stains. The bacteria cannot be grown in a cell free environment but can be grown in hen eggs and some mammalian cell cultures.[1] 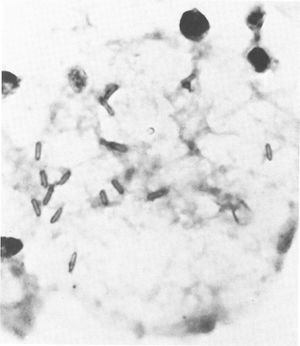 C. piliforme can infect a variety of hosts but is most commonly found in rodents. It can infect hosts either through the inhalation or ingestion of spores or via an oral fecal route, usually through the consumption of the feces of an already infected animal. Acquisition via spores is the most common method as the spores can survive in a variety of environments for long periods of time.[2]

Acquisition of Clostridium piliforme usually leads to the arising of Tyzzer's Disease in the host. The initial signs of Tyzzer's Disease are generally nonspecific symptoms such as anorexia, diarrhea, depression and a ruffled coat, making it hard to identify early on.[4] Sudden death with no symptoms can also happen, although this is much more likely in younger creatures and those who are stressed due to environmental circumstances such as overcrowding. Those with symptoms have an extremely high mortality rate (90 percent in rabbits).

C. piliforme mainly resides in the organs of the digestive system, activating phagocytosis of the target cells to get inside.[5] It first infects the ileum and cecum, followed by passing through the hepatic portal into the liver, and later on can infect other tissues in the body, residing within the cytoplasm of infected cells. Necrotic foci can develop in infected tissue.[1] Immunosuppressed individuals are at a higher risk of both acquiring and dying from the illness, specifically those with B cell defects.

The current way to test for C. piliforme is to do and ELISA, but this has the possibility of coming up false positive. Most diagnoses are done post mortem through the staining and microscopic analysis of organs.[3] 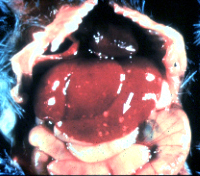 Currently there is no definitive treatment due to both the lack of knowledge of how C. piliforme works and the fact that it is intracellular, meaning most standard antibiotic treatments do not work. Tetracycline has been the most successful course of action, but is not guaranteed to work.[6]

To prevent the spread of C. piliforme many special precautions can be taken. Infected individuals should be separated from the group as soon as possible. In lab situations, anything that can be autoclaved should be to kill off the spores, anything non essential should be thrown away, and bedding should be replaced regularly. If a group becomes infected, the entire group should be put down to prevent further spread and the area should be cleaned with a chemical sterilant.[7]