A Microbial Biorealm page on the genus Clostridium tetani 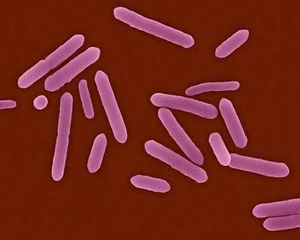 Clostridium tetani is a bacillus, or rod-shaped, bacterium. It is Gram positive and commonly appears to be shaped like a drumstick or tennis racket when stained. This strange appearance is due to the sporulation that occurs inside the cell. C. tetani is an obligate anaerobe and must rely on fermentation. As an obligate anaerobe, it is not able to tolerate the presence of oxygen. C. tetani is known for causing tetanus. Spores of the bacterium enter the body through open wounds and germinate once inside. C. tetani move around by the use of rotary flagella. The organization of these flagella is peritrichous, which means that there are flagella randomly assorted around the cell. C. tetani are found in many different environments, but most commonly in soil, dust, or sediment. They are also found in human and animal intestinal tracts, where they become pathogenic. (GoldenMap)

C. tetani is a bacillus (rod-shaped) gram positive bacterium, which means it possess a thick cell wall made up of multiple layers of peptidoglycan and one inner membrane. C. tetani are motile bacteria and move by the means of rotary flagellum in the peritrichous orientation. C. tetani in the presence of oxygen changes into its endospore (drum stick shaped) conformation.

C. tetani synthesizes ATP by the use of a sodium motive force as well as fermentation. The bacterium relies on the breakdown of amino acids (driven into the cell with the help of sodium ion pumps) by various enzymes into pyruvate. The pyruvate can then be fermented into lactate as well as converted into acetyl-CoA. The pyruvate can also donate electrons to a membrane bound electron transport system with the help of a ferredoxin oxidoreductase reaction. The electron transport system results in the secretion of sodium ions thus creating a sodium motive force, which leads to the synthesis of ATP by sodium ion driven ATP synthases. (Bruggeman et al)

C. tetani is found mostly in warm, damp areas, especially in manure treated soil, but can also be found in the intestines or feces of many animals, such as horse, sheep, and dogs. In its vegetative state, C. tetani is heat sensitive and cannot survive in the presence of oxygen. However its spores are resistant to heat and some antiseptics, but oxygen rich areas are also toxic to them. When in soil, they can last for months or even years in the proper conditions.The spores can germinate through the dead cells of the body, thus spreading toxins. [Atkinson et al.]

C. tetani affects humans by causing the disease called tetanus. The spores enter its host through open wounds, lacerations, or burns where many cells are dead. This provides the necessary environment for C. tetani to begin to spread its virulence factors. In the presence of anaerobic conditions (lacking oxygen), the spores can germinate. This is when the spores produce toxins that are harmful to the human nervous system. The toxin tetanospasmin travels through the body via the nervous system, where its goal is to reach the spinal cord. Here is where the toxin really begins to attack the body. The toxin interferes with the neurotransmitters and, thus, blocks messages to the brain. This leads to unwanted muscle contractions and spasms, and in bad cases, individuals can experience severe seizures.

The only way to help prevent the tetanus disease is by getting proper immunization. It is the only vaccine-preventable disease that is infectious, but not contagious. This means it can not be transferred in any way from person to person. If suffering from tetanus, there are antibiotics and medication that can be taken to help the patient heal. Most patients have only spasms, but those spasms can effect chest muscles causing problems with breathing. If a patient does not seek treatment, there is a strong possibility of death. Tetanus can affect newborns whose mother's have never received proper immunization, and typically they are infected by the umbilical stump when it has not been cut with properly sterilized instruments. The death rate in infants is much higher than that of adults affected by tetanus. [Atkinson et al.] 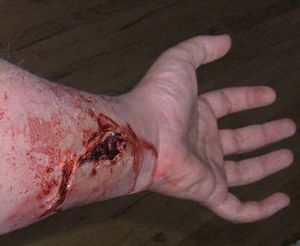 An open wound on the forearm of a patient that has been infected by the tetanus toxin.[All About Tetanus]

A 2008 study in Kano, Nigeria sought to determine the susceptibility of Clostridium tetani to various antibiotics. Soil was collected from five different locations and cultured under anaerobic conditions to observe the number of samples which contained Clostridium tetani spores. The bacteria was observed in 60% of the soil samples. The samples were treated with amoxicillin, chloramphenicol, tetracycline, erythromycin, augmentin, co–trimoxazole, metronidazol, penicillin V, gentamycin, cloxacillin, sparfloxacin and ciprofloxacin to determine antibiotic susceptibility. The most effective antibiotic in preventing colony growth was observed to be sparfloxacin, with erythromycin, tetracycline, gentamycin, chloramphenicol, metronidazole and ciprofloxacin also preventing growth. The remaining antibiotics appeared to be inaffective against Clostridium tetani. [Bukar et al.]

In a 2002 study on anti-cancer drug forms, it was discovered that C. tetani and other members of the Clostridium family could be used for tumor-specific drug delivery. More specifically, the spores of C. tetani and other members of the genus would be used in this anti-cancer drug delivery process. It was found that the presence of hypoxia, which are components of solid tumors that result from a lack of sufficient blood supply, were dramatically reducing the efficiency of anti-cancer techniques, such as surgery, chemotherapy, and radiation. The use of genetically recombined spores of C. tetani that lack the pathogenicity of normal C. tetani (due to the tetanus toxin) species, were used to deliver toxic elements specific to the tumor cells. Upon administration to the target tumor, these bacteria colonize specific regions of the hypoxia and can be genetically transformed to produce enzymes like cytosine deaminase and tumor necrosis factor alpha. This protein delivery process via the use of Clostridium bacterium is thought to be very safe because specific antibiotics can be administered at any point to get rid of the specific bacteria. This study has provided an alternative technique to cancer treatment that involves the delivery of anti-cancer proteins to a specific tumor site. [Nuyts et al]

One very interesting thing about C. tetani is that it produces four clinical types of tetanus. The generalized type is the most common form of the disease. 80% of all the individuals with tetanus have the generalized form. In this type, the toxins are distributed by the lymphatic and vascular systems. The toxins spread much farther throughout the body and affect many more nerves. The first symptom of this case is usually lock jaw. The nerves in the jaw are attacked by the toxin and the muscular contraction of the jaw creates the lock jaw. From the jaw, the toxin moves to the neck and then down the back. The next clinical type is localized tetanus, in which patients experience muscle spasms very near to the wound. This type of tetanus is less threatening and only has a 1% fatality rate. The third type is cephalic tetanus, which affects cranial nerves. This type most commonly occurs after injuries such as ear infections and head traumas. This type of the disease is very painful because it affects the muscles in the face, such as the eyelids, tongue, and lips. The last type of the disease is neonatal tetanus that occurs in newborns. The fatality rate of this is the highest of any form. It has a fatality rate of approximately 90% and is most common in third world and developing countries.[Fix et al]

Out of the injuries that led to the tetanus infection by C. tetani, the highest cause is from puncture wounds. 37% of all infections are a result of punctures, 24% a result of lacerations, 11% due to chronic wounds, 6% from abrasions, 5% from needle injections by drug users, and 17% from other methods.[Fix et al]

Another cool fact about C. tetani has to do with the common myth about rusty objects. Contrary to common belief, it is not true that wounds caused by rusty objects, such as nails, cause tetanus. The fact is that it is not likely that the rusted object that has caused the wound will be carrying C. tetani bacterium. The object will only increase the chance of infection because of the open wound that it has created.[Fix et al]

All About Tetanus. 2010. Photograph. Department of Health, South Australia.