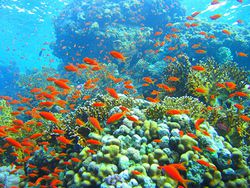 Corals are invertebrate marine animals belonging to the phyla Cnidaria and class Anthozoa. They thrive in salty ocean water. Although some corals have been found as deep as 91 m (300 ft), most live optimally at shallower depths of 70 m (230 ft) or less (3). Corals are either soft or hard, but reefs form only with the presence of hard coral. Soft coral doesn't have the capability to make reefs but still may be present. Hard corals have a calcium carbonate skeleton (3). The microbial community found in coral reefs are co-habitating, non-pathogenic, and consist of bacteria, archaea, and fungi. They live in the mucus, tissue, and skeleton of coral (1). These microbes effect the ecosystem's food webs, life cycles, chemical cycles, nutrient cycles, and regulation of pathogenic microbes, which are important factors in coral resilience. Coral microbial ecology studies these relationships between corals and microorganisms in the hope of understanding coral resilience and disease to protect a valuable, biologically diverse ecosystem as well as to identify and predict environmental change. 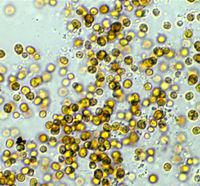 The microbiome of coral is the most genetically adaptable part of the coral. It is able to adapt in a period of days or hours, whereas the coral itself takes many generations (6). Such changes may be indicative of stress on the coral. The microbes’ functions include nitrogen fixation, capturing iron, waste cycling, and production of antibiotics (1). Zooxanthellae are single-cell photosynthetic algae that live in the coral's gastrodermis, the tissue covering the gastrovascular cavity (3). Coral and zooxanthellae have a positive symbiotic relationship. Most of the coral's food intake is reliant on the products of the zooxanthellae's photosynthesis. In return for the food source, these microbes get a place to live and some inorganic nutrients. The pigment of coral is also a product of healthy zooxanthellae. Cyanobacteria also live inside the coral tissue and produce food for the coral, although in much lesser amounts than zooxanthellae. Some cyanobacteria are able to perform nitrogen fixation, which converts nitrogen in the coral’s aquatic atmosphere into usable compounds.

The most well known cause of reef degradation in recent years is due to disease. All known coral disease arise from microorganisms (1). There is still much research to be done in the area of coral diseases, but it is evident that an understanding in the microbial shifts marking the passage of healthy coral into diseased coral is essential. It has been noted that thermal stress can result in pathogen dominance that then causes bleaching. One relatively well known disease is called Black-Band disease. It is a polymicrobial disease that produces a bacterial mat consisting of cyanobacteria and sulfite-oxidizing and sulfate-reducing bacteria. It kills the coral with oxygen deprivation, increase in sulfide, as well as potential toxins created by the cyanobacteria (5). 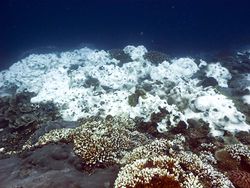 Under stress, such as a shift in water temperature or salinity or even excess of sediment, nutrients, or chemicals, zooxanthellae are expelled from the coral. This causes the coral to lose its color by revealing the coral's white calcium carbonate skeleton. The whitened coral is said to be 'bleached.' If the stress continues, the coral may die because it loses its symbiont zooxanthellae that is one of its major sources of food. However, once the stress is reduced or eliminated, the zooxanthellae will return to the coral and restore it back to health. Bleached coral is also believed to be more susceptible to disease (4).

Resilience means that the coral has the ability to maintain vital, healthy functions of the ecosystem even under certain stress, and involves both resistance and recovery. Under too much stress, coral will be susceptible to bleaching. Biodiversity and functional redundancy, where one species can take on the role of another are important components to support resiliency. Different clades of zooxanthellae respond differently to changes in light and heat and therefore can be used to influence coral resilience (2). Understanding resilience is vital for maintain degrading coral reef ecosystems.

There is still a great deal of research to be done to understand the relationship between microbes and their coral homes, especially now that coral reefs are gradually disappearing. Some of the major questions being researched at present: “What are the mechanisms underlying coral reef health and resilience? How do environmental and anthropogenic pressures affect reef ecosystem function? What is the ecology of microbial diseases of corals?” (7).

Many recent studies have revealed that zooxanthellae, originally believed to be one species, actually include an incredible amount of subspecies. It is proposed by one study that having such a diverse number of species of one microorganism on one coral may promote competition among the species. This would be a detriment to the mutualism between the coral and the zooxanthellae (8).