Cordyceps is a genus of fungi that includes approximately 400 recorded species of parasitic fungi [1]. Cordyceps belong to the ascomycota phylum, also known as “sac fungi” [2].They produce microscopic sexual structures where non-motile spores are formed [3]. The hosts of these fungi include various arthropods, including insects- often in larvae form-spiders, mites and other fungi [4]. Cordyceps are known for their ability to manipulate their hosts for their own survival and reproductive purposes [3].

Cordycep fungi are distributed worldwide, but particularly in Asian countries, including Tibet, Thailand, and China— in places where the climate is humid and warm [5]. They were also used traditionally as medicine, notably in Tibet and China, and are currently being researched for medicinal uses [6].

Cordyceps produce proteases and chitinases that degrade the cuticles of insect hosts in preparation for invasion [3]. They grow osmotrophically: they secrete enzymes to degrade external substrates,and then absorb the resulting sugars and amino acids [3]. A qPCR assay quantifying the biomass of Ophiocordyceps sinensis in Thitarodes larvae found that they aggregated the most in these tissues in order of decreasing density: fat body, body wall, haemolymph and intestinal walls [7].The fat body is the primary region of parasitism because of the energy it can provide in metabolism; additionally, the next generation of the fungus could be transmitted to the ovaries through this region [7]. Orange colored extensions of the fungi are found in the abdominal areas of ant hosts, and extend to the base of the stroma [3]. This structure is rich in carbon compared to the white and black colored hyphae, probably due to specialization of the different fungal structures, where the orange hyphae are for carbon storage [3]. The fruiting body stores unsaturated fatty acids [8]. With their array of enzymes and unique structures, Cordyceps have evolved to effectively degrade their specific hosts, and acquired organized division of the nutrients absorbed and synthesized.

Life Cycle and Interactions with Host 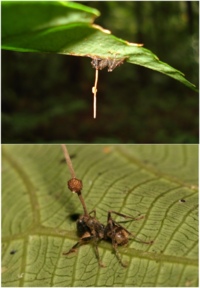 Figure 1. Camponotus leonardi ant in a "death grip" on a major vein on the underside of a leaf. The perithecia is developing on the Ophiocordyceps unilateralis stroma protruding from the ant’s head. Obtained from [14].

Cordyceps may invade hosts in the form of spores, often through the lungs [9]. Experimental relocation of ants was detrimental to the fungus, suggesting that fungal manipulation of hosts is crucial for enhancing parasite fitness [3].

Host behavior manipulation increases the fitness of the fungus and probability of further transmittance. Examples include hosts’ abandonment of nests [10], and self-exposure to predators to allow transfer to secondary hosts [3]. As host nutrients run low and significant growth has developed, growth extends into the brain and secretes chemicals that alter host perception of pheromones [9]. As a reservoir of resources, the host body needs to be sheltered to last after death [3]. In Ophiocordyceps unilateralis, before the death of its host, the fungus manipulates the ant to relocate to a higher altitude and clamp down on a major vein on theunderside of a leaf with its mandibles: this is known as a “death grip” (Figure 1)[3]. Now, the ant is sheltered by the leaf, and the spores produced will have greater ground to scatter over [9]. 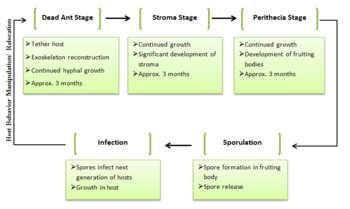 After the host’s death, O. unilateralis’ growth rapidly envelops the ant with hyphae, and physically secures the ant to the leaf [3]. The fungi’s growth cycle after the ant’s death can be broken down into three stages: the Dead Ant stage, the Stroma stage- the growth of a long stalk extending from the host body- and the Perithecia stage- the development of the fruiting body [10]. Each stage lasts approximately three months [10]. The hyphae and stroma’s brownish coloris derived from red and purple pigments which possess antibiotic properties that prevent competition from other invasive microbes [3]. External hyphal growth occurs in thinner intermembrane areas, reconstructing the ant cuticle to create a protective shield [3]. Continued growth ultimately leads the release and dispersion of spores to start the next cycle.

Phylogentic analysis suggests that Cordycep species may have diverged from mycoparasites or plant endophytes, and are related to plant pathogens [4]. Cordyceps species’ ability to manipulate host behavior may have evolved around 48 million years ago, as suggested by analysis of marks in fossilized leaves [11]. Phylogenetic analysis suggests that parasitic characteristics were accumulations of multiple evolutions, and important enzymes for invading and degrading hosts including proteases, chinases and lipases were common genomic features in various Cordyceps species, indicating convergent evolution [4]. The amount of secreted proteins found in Cordyceps were significantly greater than their genetically related plant pathogens and saprophytes, and is thus likely a result of evolutionary adaptation to their specific hosts and environments [4]. 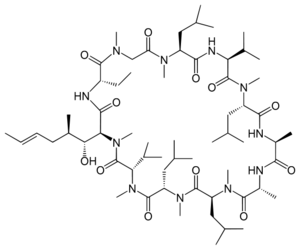 Cordyceps has been traditionally used as medicine in places like Tibet and China [2]. Some contain chemicals with pharmaceutical applications, like ciclosporin, which is used as an immunosuppressant in organ transplants to lower risk of rejection [11]. Extracts from Cordyceps sinesis suppress airway inflammation [12]. These extracts decreased extracellular signalregulated kinase 1/2 signaling pathway, which then suppresses the transcription factor, nuclear factor kappa B’s activity in associated tissue cells [12]. An exopolysaccharide fraction from some Cordycep sinesis strains also inhibits certain tumors’ growths and elevates immunocyte activity [1].