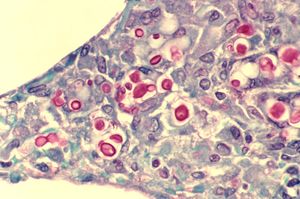 Genetic analysis and genome sequencing of C. neoformans and C. gattii is an important part of diagnosis and treatment of cryptococcosis. Multiple Locus Sequence Typing (MLST) analysis has been used to great effect, and of human pathogenic fungi these two species of Cryptococcus are some of the best mapped.

There are several issues that arise when trying to use genetic research for diagnosis and treatment in a clinical setting. The first is that these cryptococcal genomes show tremendous plasticity, and thus the ability to undergo microevolution. This has been observed in vivo in human patients, and presents a challenge to physicians attempting to treat patients with cryptococcosis. Even within strains isolated from patients, there has been observed minute genetic differences. Only through detailed mapping of the entire genome of both species and fully understanding and observing the genetic controls that allows this can this issue be overcome.

Another issue that arises is that C. neoformans and C. gattii are genetically different species and react differently to the same environmental stresses. This is to be expected, as they are different species, but it makes it difficult for the clinical treatment of patients. The two species also show a remarkable disconnect in their reactions in vivo and in vitro. For example, in vivo there has been shown resistance to fluconazole (a common antifungal medication) through gene plasticity and subsequent gene duplications for efflux pumps in both species. This contrasts with the reactions of the species in vitro, where if a previously resistant specimen is isolated and again exposed to fluconazole, it is fully susceptible. Obviously, this presents a challenge to the clinical treatment of cryptococcosis.

As of right now, genetic research into these two species of Cryptococcus is not fully applicable to clinical situations. There are techniques available to determine which species of Cryptococcus is causing the infection (CGB agar plate assays and MALDI-TOF are two common ones), but this information is not necessarily useful to the physician when determining a treatment course. Recent studies are beginning to link genetic variations in human immunity genes to increased susceptibility, which makes determining risk factors more difficult for physicians. [2]

C. neoformans
C. neoformans is the better studied of the two Cryptococcus species known to cause cryptococcosis. It was previously believed that C. gattii was merely a subspecies of C. neoformans, but it has now been recognized as a distinct species in its own right. C. neoformans is not particularly well adapted as a human pathogen. It does not have specific genetic survival mechanisms for human hosts, hence why infection is usually only seen in immunocompromised patients or in those with certain immune deficiencies.

C. neoformans has several adaptations that make it unique when compared to other human pathogens, especially pathogenic fungi. One of these is the formation of microvesicles. The pathogen uses these to transport virulence structures from interior synthesis sites to the extracellular matrix, where they will be utilized. These microvesicles have shown the ability to interact with the blood-brain barrier, which may be a factor that influences the ability of C. neoformans to infect the central nervous system. C. neoformans is also able to actively remodel its cell wall in response to host signals. This is a form of immune system evasion by hiding immunogenic features. [3]

Under large amounts of stress from the host, C. neoformans has the ability to form extremely large cells (20-100 uM), which are largely immune to host responses. These cells, most commonly seen in pulmonary infections, have the ability to survive host responses and then repropagate the infection, and due to their polyploid nature can give rise to large amounts of genetic diversity. [4] 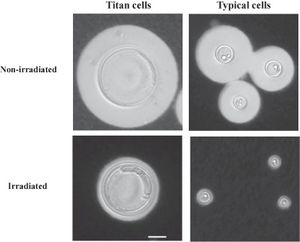 C. neoformans and C. gattii are not normally known to damage host cells, but a mutant, rim101, has an altered cell surface that triggers different cytokines. These cytokines induce a massive inflammatory response that is damaging to inflammatory cells.

Cryptococcosis continues to be a massive public health issue, with an estimated 625,000 deaths per year. The outcome for HIV positive patients continues to get better year after year, but concerningly the outcome for patients considered “otherwise healthy” has not changed since the early days of the HIV epidemic. Estimates of US mortality predict that 80% of the deaths that have occured between the years of 2002-2013 were not HIV positive. This is most likely due to the delayed diagnosis in patients without HIV. Cryptococcosis is a defining infection within the HIV+/AIDS community, meaning that detection and diagnosis is generally fairly rapid within these populations. Outside of these groups, detection rates are lower, and thus the mortality rate is higher. More research will help to increase the detection and survival rates in all patients with cryptococcosis. [6]