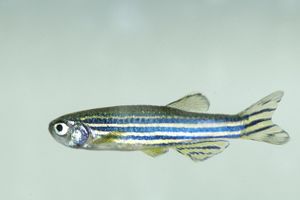 Zebrafish (Danio rerio,) are small freshwater fish naturally found in South Asia. Belonging to the Cyprinidae family, Zebrafish are related to minnows and carps. Zebrafish have an average lifespan of 42 months and a generation time of 3 months. Due to its ease of use in laboratory procedures and its homologies to other, more complex vertebrates, Danio rerio is commonly used as a model organism for vertebrate genetics.

Danio rerio as a Model Organism

Zebrafish have been used in the laboratory since the 1960’s, but their popularity as a model organism did not grow significantly until more recently. In 1981, George Streisinger developed a method for use of zebrafish in genetic experiments; he performed genetic screens on offspring produced via parthenogenesis from mutant female fish. This approach helped to bring about numerous zebrafish studies in the 1990’s. Genetic screens performed by Christiane Nüsslein-Volhard and Wolfgang Driever also helped to uncover several useful mutations. Since then, Danio rerio has been a staple organism for genetic modeling[1].

In 2013, the complete zebrafish genome was sequenced. The zebrafish genome project began in 2001 at the Wellcome Trust Sanger Institute in Hinxton, England. The genome contains around 1,595,582,000 base pairs and over 26,000 protein-coding genes, around 70% of which are shared with humans. Additionally, a zebrafish ortholog has been found for around 84% of genes involved in human disease. Thus, the zebrafish model is particularly prevalent in biomedical genetic research, for example, in identifying genes involved in cancer or heart disease.[2]

Though Danio rerio are not mammals, and thus are not as closely phylogenetically related to humans as some other common laboratory organisms (e.g., mice), there are several features that make the zebrafish particularly useful as a model organism. Notably, zebrafish are small, and their husbandry is cheap. Zebrafish also have large spawning sizes and a fast growth rate as compared to many other vertebrates; one day of zebrafish embryo development is roughly equivalent to one month of human fetus development. Zebrafish breeding is also easily controlled. Fertilization takes place outside of the mother, and mating can be induced by stimulating daylight. Finally, zebrafish have important analogous, yet simplified structures. They possess most major organs and tissues, including kidneys, blood, and eyes[3]. 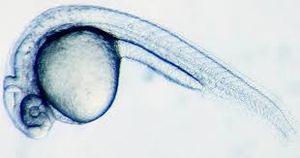 Zebrafish reproduce through fertilization of eggs that have been spawned by the females, which release between 5 and 20 eggs per spawning. Upon fertilization, zebrafish eggs become transparent[4]. This transparency contributes to its use as a laboratory organism, as development is visible. Development of the zebrafish embryo is also fairly rapid; at 24 hours, the brain, eye, and neural tube are already visible. By 5 days after fertilization, the larvae can independently swim [5]. A short generation time of 10-12 weeks combined with the transparency of its embryos has solidified the zebrafish’s status as a regularly used model organism.

The zebrafish has 25 chromosomes with over 26,000 genes, of which around 16,500 are orthologous to human genes. During its evolution, as a member of the teleostei infraclass, the zebrafish underwent teleost-specific genome duplication, indicating that the zebrafish genome experienced an extra whole-genome duplication, as compared with other vertebrates, like humans. Thus, the zebrafish genome contains an unusually large number of genes specific to the species[6]. For example, the long arm of the fourth chromosome is distinctive, as 80% of the genes on this region have no human ortholog. In fact, this arm is distinct, as it shows a lack of protein-coding genes and an abundance of heterochromatin. Current research suggests some implication of this region in sex determination.

Over 47% of human genes share a one-to-one relationship with a zebrafish ortholog. However, there are some human genes of biomedical interest for which a complementary zebrafish gene has not been found. Examples are leukemia inhibitory factor (LIF), interleukin-6 (IL6), and oncostatin M (OSM). It is clear, then, that this lack of some direct matches could be a drawback for the model.

The effectiveness of the zebrafish as a genetic model is due, in part, to its sensitivity to mutagens. Scientists are able to use tools like CRISPR-Cas9, mRNA’s, transposons, viral vectors, and other chemical mutagens to edit the genome of adult fish, which, in turn, pass the mutations onto their offspring. Recent developmental research has also established methods for directly editing the genome of zebrafish embryos, so that the effects of these modifications can be directly studied throughout the embryo’s development[7]. 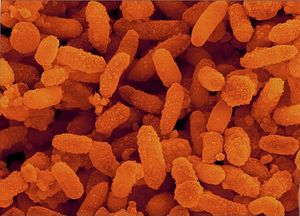 Aeromonas hydrophila comprises a portion of the zebrafish microbiome.

Recent studies have provided evidence for the existence of a common microbiome across all Danio Rerio. The most common microbes present in Danio rerio are consistently of the phylum Proteobacteria; other phyla, like Fusobacteria, Firmicutes, and Actinobacteria are also present in varying proportions, depending on the characteristics of the specific fish and its habitat. The most prevalent microbes present in the zebrafish gut belong to the genera Aeromonas and Shewanella[8].

There are several prominent areas of current zebrafish research. Zebrafish have a unique regenerative ability not possessed by humans. For example, if a researcher were to remove part of the heart of an adult zebrafish, the organ would grow back within a few weeks. Similar properties have been demonstrated in other parts of the zebrafish body, such as the tail and eye tissue[10]. Current research is attempting to compare the genes responsible for this body reconstruction to possible human orthologs. By switching on certain related human genes, scientists may be able to induce analogous regeneration of human organs. This property could potentially be used to treat severe injuries or help patients recover from heart attacks.

Zebrafish models for Alzheimer’s Disease and Tauopathy have also been explored. The Zebrafish nervous system shares some important key components with the analogous system in humans, including factors like the neurotransmitters used (glutamate, GABA, norepinephrine, norepinephrine, serotonin, dopamine, etc.), as well as the neuron and glial components. However, the zebrafish nervous system is highly simplified as compared to the human nervous system. This streamlined nervous system, in conjunction with the transparency of the specimen, has allowed the zebrafish to become a prominent genetic model for some human neurological diseases, including Alzheimer’s Disease. Several zebrafish genes that mimic the disorder have been discovered; for example, the Psen1 zebrafish gene produces symptoms similar to those seen in human Familial Alzheimer’s Disease (FAD)[11].