Deamination is a proposed mechanism of somatic hypermutation(SHM) which results in point mutations within the Immunoglobulin variable region(IgV) gene. The purpose of these mutations is to produce antibodies that more effectively combat an invading pathogen. The process of deamination is a consequence of activation-induced deaminase(AID). AID induces the process of deamination itself by converting cytidine(cytosine bound to ribose) to uridine(uracil bound to ribose). The conversion of cytidine to uridine results in a miss match of bases and therefore induces DNA repair. The repair process uses mutagenic mechanisms, such as error-prone DNA polymerases[1], which result in the creation of mutations in and rearrangement of IgV genes. These mutations change the genetic code of the IgV region resulting in an antibody with either a higher or lower binding affinity. After hypermutation, higher binding affinity is selected for during affinity maturation resulting in a more effective antibody. Mutagenic processes like those induced by AID must be tightly regulated due to the disease related and oncogenic risks of mutating DNA. Therefore, the AID protein is controlled by a complex network of regulatory factors which are vital to the safety of SHM.

The AID protein itself is 198 amino acids long and is encoded by the AICDA region of the DNA. AID belongs to the APOBEC-1-related protein family which includes other DNA editing molecules. The molecule contains a cytosine deaminase domain as well as a leucine rich region around the c terminus. Within B cells, AID initiates the processes of both SHM and class switch recombination(CSR), although different parts of the protein are involved in each process. The C terminus of the AID protein is associated with CSR. The expression of C-terminal mutations in the AICDA gene lead to decreased levels of CSR as the level of SHM remains constant[2]. Similarly, mutations of the N terminus led to the defective induction of SHM suggesting that the N terminus of AID plays some sort of role in initiating SHM.

Deamination by AID carries a potential tumorigenic nature when mistargeted on to non-Ig loci. AID has been shown to promote B cell leukemia, lymphoma, and myeloma when expressed ectopically[3]. Therefore the regulation of deamination by AID is as critical as SHM itself in terms of protecting the body. Regulation of AID starts with the AICDA gene and the transcription factors which manage its expression. AICDA is composed of 4 regions which include binding sites for at least 19 transcription factors. While transcription factors like NFκB, STAT6 and C/EBP bind to enhancer regions which promote transcription, transcription factors like PAX5 and E2A bind to and inactivate repressor regions of the gene therefore also promoting transcription[4]. Most of these transcription factors are only upregulated during B cell activation, ensuring that hypermutation does not occur in resting B cells. High transcription levels of AID are not desired in inactivated B cells. Excess levels of AID are linked to more frequent targeting of non IgV region genes inducing undesired mutations which may be associated with cancers. As a result, the level of AID is also heavily regulated on a post-transcription level using miRNAs. Two main miRNAs(miR-155 and miR-181b) target transcripts of the AICDA gene. Both miRNAs bind to the 3’ untranslated region of AID mRNA inducing a mechanism that ultimately results in lowered levels of SHM and CSR. Despite targeting the same sites, miR-181b differs in its expression pattern from miR-155. miR-181b levels are highest in unstimulated B cells and its levels decrease heavily as a result of activation. However, miR-181 levels gradually recover after activation. It should be noted that miR-181 and miR-155 have multiple target molecules besides AID mRNA and therefore the expression patterns of the two molecules may not be entirely based on the regulation of AID levels. 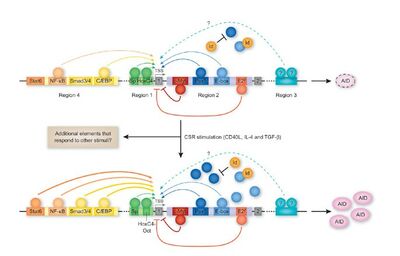 AID is phosphorylated at multiple sites, inducing the molecule to associate with RPA(replication protein A) which guides AID to both the V and S regions of the immunoglobulin gene. However the mechanism by which AID binds specifically to the V region over other loci is still unknown. RPA can only bind to single stranded DNA segments and therefore relies on either transcription bubbles or single stranded bubbles formed by other means to bind AID to its DNA substrate. AID may move along with the transcription bubble as it moves down the DNA[6]. Once bound, AID deaminates Cytidine, converting the molecule into uridine. This creates a mismatch which is subsequently identified by the MSH2-MSH6 heterodimer. This molecule guides DNA Polη to the mismatch site. Polη is a type of translesional DNA polymerase, a class of polymerase which is specifically used to repair damaged DNA[7]. However, during SHM, Polη repairs deoxyuracil mismatches with low fidelity often inserting different base pairs from the original and as a result causing point mutations[8]. While repair by Polη is most common during SHM, it is not the only repair molecule involved. Proteins like Polζ and Rev1 also repair AID created lesions and induce mutations as they do so. Rev1 for example causes Guanine:cytosine to cytosine:guanine inversion mutations.[9] Ultimately, these mutations serve to create variety and diversity among the antibodies of different B cells. After SHM is finished, these B cells bind competitively to a limited number of antigen-specific helper t-cells. The B cells with low binding affinity die off while the B cells mutated to have high binding affinity survive and proliferate. This process is referred to as affinity maturation and results in B cells which are more effective in binding to a specific antigen.[10]

The human body hosts a vast ecosystem of microorganisms termed the human microbiome. This microbiome is chiefly composed of bacteria and lives most prominently in the human gastrointestinal tract[11] . While the majority of these organisms are harmless and or beneficial, some present a risk to the health of the human host. Some of these microbes, like Helicobacter Pylori, may cause tumorigenesis via the damage and mutation of DNA. H. Pylori causes this damage, in part, through inducing aberrant expression of AID in host cells[12]. While when functioning properly, AID is only present in B cells during activation, H pylori causes the expression of AID in epithelial cells within the gastrointestinal tract. H pylori activates NF-κB transcription factor within host cells through the secretion of bacterial virulence factors. NF-κB is in part responsible for activating the transcription of the AID gene leading researchers to believe that H. Pylori uses the activation of NF-κB to promote the expression of AID in epithelial cells[13]. This not only demonstrates the potential danger of the human microbiome but also the inherent dilemma of AID as a DNA mutator and the issues as well as benefits that arise from such a molecule.

The deamination model suggests that SHM relies heavily on AID to start itself. Deamination induced by AID is the first step of SHM and ultimately allows for new mutations to occur on the Immunoglobulin coding gene. When AID is targeted properly, the molecule uses deamination to increase the effectiveness of antibodies in the immune response. When targeted improperly, AID has the potential to target non IgV genes and compromise the genomic integrity of the cell it is expressed within. This explains the importance of the extensive regulation surrounding AID's expression. AID can easily become dangerous to the cell if not controlled.