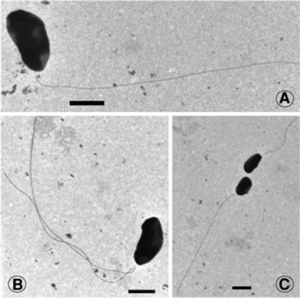 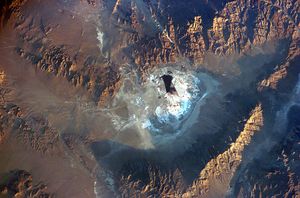 D. alkaliarsenatis is best described as an anaerobic, haloalkaliphilic bacteria. The SLSR-1 strain morphology is a motile vibrio that stains Gram-negative. The size of the bacteria is roughly 0.5 x 3.0 μm, while TEM revealed the motility was due in part of a 10 μm polar flagellum. The preferred habitat of D. alkaliarsenatis is located in Searles Lake in CA, USA due in part to the high salt content and basic pH. It has demonstrated growth capability via sulfate-reduction over a broad range of salinities (50-300g/L). Most notably it is capable of growth via dissimilatory arsenate reduction which can make it of potential importance in that arsenate can inhibit the conversion of pyruvate into acetyl-CoA, blocking the Krebs cycle and therefore resulting in loss of ATP. By converting arsenate to a non-lethal form, this makes the waters substantially more safe. Because Searles lake contains high amounts of borate, this hinders the dissimilatory sulfate reduction pathway, making dissimilatory arsenate reduction the preferred metabolic pathway.

Little is known of the specific genome (i.e circular genome, biological machinery, etc.),however, several genes that contribute to its metabolic characteristics are: dsrAB which is responsible for sulfate reduction and arrA, responsible for arsenate respiration. Amplicons from 16S rRNA exhibited presence of close relatives of strain SLSR-1 as part of the flora of this ecosystem despite the fact that sulfate-reduction activity could not be detected in situ. Genetically, D. alkaliarsenatis is related closest to 3 other species of the Desulfonatronospira family: D.spira thiodismutans (95 %), D.spira delicata (94 %) and D.spira dismutans (94 %) via BLAST sequencing. The SLSR-1 partial arrA was most similar to an ArrA-like encoding gene found in the genome of Desulfonatronospira thiodismutans (71 and 82 % amino acid identity and similarity, respectively). Using phylogenetic analysis of the predicted protein of the arrA-like gene sequence of strain SLSR-1 showed it is part of the arsenate respiratory reductase clade of the Dimethyl Sulfoxide (DMSO) reductase family of molydenum enzymes.

D. alkaliarsenatis has unique metabolic characteristics. The electron donors consist of lactate or pyruvate, but not acetate. Growth was observed when sulfide served as the electron donor and nitrate served as the electron acceptor. Additionally, D. alkaliarsenatis demonstrated slow but obvious growth as an anaerobic heterotoph when cultivated in a defined mineral medium with sulfate. The strain SLSR-1 showed arsenate reduction was impeded modestly at the highest salinity tested (~330 g/L).

Most notably, within anoxic sediment, low but detectable free sulfide was prevalent below the dense brine water. Therefore, in the absence of sulfate, the origin of sulfide could arise from dissimilatory reduction of less oxidized intermediates of the sulfur cycle (i.e., thiosulfate, sulfite, or elemental sulfur.)

As a haloalkaliphilic sulfate-respiring bacterium, the biogeochemical significance of this organism is quite useful. The isolate is capable of growth via sulfate-reduction over a broad range of salinities (125-330g/L). Strain SLSR-1 was capable of growth primarily via dissimilatory arsenate-reduction and showed a broader range of salinity tolerance (50-330 g/L) while also growing under dissimilatory nitrate reduction to ammonia. Because of the presence of borate found in Searles Lake, this limits the ability of the organism to respire via sulfate redcution, leaving arsenate reduction as its primary biogeochemical contribution.

Because little is still known of this organism, it is not yet determined if this bacterium participates in a symbiotic relationship, nor if it poses any pathological threat to humans, animals, or plants.