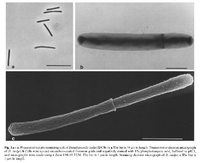 Desulfomonile tiedjei cells are non-motile, non-spore forming and rod shape approximately 0.8- 1 by 5-10 μm in size. These cells have round ends and form a collar due to invagination of the cell wall. The function of the collar is for binary fission. This bacteria, is gram negative and esculin negative. In addition, D. tiedjei is strictly anaerobic autotroph or chemoorganotroph, dehalogenating, sulfate reducing bacterium [1].

Desulfomonile tiedjei was isolated from municipal digester sludge from Adrian, Michigan. [7] Digester sludge refers to the semisolid waste from the treatment of municipal sewage. The chemical composition of sewer sludge varies, but the sludge can be quite rich in organic matter, with the dry mass of organic compounds reaching up to 50% in some urban treatment systems. Nitrogen, phosphorous, potassium, sulfur, and other essential elements are present in smaller amounts as well. [2] Another important aspect of the environment that D. tiedjei was isolated from is that the municipal digester sludge is an anoxic environment. When cultured, D. tiedjei grows at a temperature range of 20-38 ℃ and a pH range of 6.5 – 7.8. Desulfomonile tiedjei requires a distinct mineral medium in order to grow. The growth factors are thiamine, nicotinamide and 1,4-napthoquinone [1].

This bacterium is a large rod-shaped, gram-negative, microorganism that is non-motile with no flagella. Reproduction occurs via binary fission. [1]

Desulfomonile tiedjei is an anaerobic microorganism capable of growing autotrophically in the presence of H2:CO2 and either sulfate or thiosulfate as terminal electron acceptors. In the presence of pyruvate, methoxybenzoates, and either formate plus sulfate or benzoate plus sulfate. In addition to these metabolisms, D. tiedjei can use heterotrophic metabolism by fermenting pyruvate to acetate and lactate if other electron acceptors are not present [1].

The bacterium can utilize hydrogen as an electron donor and reduces 3-chlorobenzoic acid as an electron acceptor. The enzyme is not specific to this acid but rather can dehalogenate tetrachloroethylene and isomers 3,4-/3,5/2,5-dichlorobenzoate. The dechlorination occurs at the outer membrane. This mechanism is not thoroughly documented but it is known to be coupled to the microorganism’s production of ATP [4].

The life cycle of this bacterium has not been investigated.

Summary of the digester sludge food chain. (Adapted from Sheton and Tiedje, 1984)

D. tiedjei is involved in syntrophic relationships with other microbes isolated from the digester sludge it was obtained from. A benzoate-oxidizing bacterium (strain BZ-2) oxidizes the benzoate produced from the dehalogenation 3-cholorobenzoic acid by D. tiedjei to produce acetate, elemental hydrogen, and carbon dioxide. In turn, two methanogenic bacteria isolated from the sludge, Methanobacterium sp. Strain PM-2 and Methanospirillum hungatei PM-1 utilize acetate. The former metabolizes the acetate into methane and carbon dioxide; the latter metabolizes the acetate into methane, carbon dioxide, and elemental hydrogen. D. tiedjei then utilizes the hydrogen produced as an electron donor for further dehalogenation reactions. [7]

Because of the microbe’s dehalogenation ability, it may be able to be utilized in bioremediation of sites contaminated with chlorinated solvents. In 1999 a pilot scale test was conducted to test the feasibility of soil bioaugmentation by D. tiedjei. A bioreactor containing 500 L of soil was seeded with the bacterium and growth factors. Next 3-chlorobenzoic acid was introduced to the soil, which was sampled periodically for the presence of 3-chlorobenzoic acid and its metabolite, benzoate, for a period of sixteen weeks. The pilot scale test was successful in that the microbe population was maintained and a greatly reduced concentration of chlorinated compounds. [3]

The microbe is not known to be pathogenic.