Wolbachia are of the diverse order Rickettsiales which encompasses intracellular bacteria that have commensal, mutualistic, and parasitic host relationships. Wolbachia are gram negative bacterial symbionts that take the forms of small rods and coccids and are 0.5 to 1.3 μm in size. Wolbachia is the most plentiful intracellular bacteria found to date with 65% of insect species containing this microbe. There are only two fully sequenced Wolbachia genomes available, but partial genomes have been assembled through invertebrate sequencing projects. The Wolbachia genome is small at around 1.08-1.7 Mb. There is not a fully sequenced Wolbachia genome with the Dirofilaria immitis host. However, the Wolbachia genomes that have been sequenced have a high number of replicates and repetitive factors. A large number of these repeats are ankyrin domains that are uncommon in bacteria. However, these domains influence the protein interactions of the host and pathogen. [1] 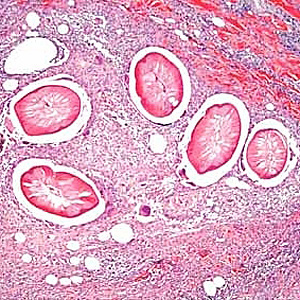 The host involved in this interaction with Wolbachia is the parasitic roundworm Dirofilaria immitis. The main host that D. immitis infects is the canine, but it has also been found in felines as well as other animals. D. immitis produces the vector borne disease Dirofilariasis that is transmitted through the mosquito intermediate host. This occurs through a series of stages. The mosquito firstly acquires microfilariae through feeding on an infected host. Within the mosquito, the larva then develops through several stages of molting. When the mosquito feeds again, the larvae enter the new host through the feeding site. Larvae become sexually mature adults over the course of approximately two to three months, and if both male and female D. immitis are present in the host, they will mate and microfilariae will be released into the new host upon feeding. [7] This transmission can be dependent on and affected by various factors. Mosquito vectors need to be available, a canine population has to be available, and the appropriate temperature needs to be maintained. For microfilarae to develop into the L3 and infective stage the temperature should be in the range of 18C° to 34°C [16]. Figure 2 shows the life cycle of Dirofilaria immitis, beginning with the common mosquito infection and ending with the development of infectious larvae [7].

Wolbachia are obligate mutualists with D. immitis [6] that are required for the reproduction and development of D. immitis [12]. There is a tripartite relationship between Wolbachia, D. immitis, and the mammalian host [15]. Wolbachia are essential for the fertility, survival, and development of D. immitis [2, 10] as well as most filarial nematode functions [3]. Wolbachia have been observed in oocytes, developing eggs, and microfilariae in D. immitis, proposing evidence that Wolbachia is transmitted transovarially [5]. When Wolbachia are transmitted through the cytoplasm of the egg, they reproductively alter their hosts [11]. Wolbachia also supply riboflavin and heme, essential cofactors, to their nematode hosts [6]. They are also associated with cytoplasmic incompatibility. This occurs when a male infected with Wolbachia mates with a female who is infected with a different Wolbachia strain and this causes the eggs as well as the sperm to be unable to produce possible offspring [11]. Wolbachia can be found within the intracytoplasmid vacuoles within the hypodermal lateral cords of both genders of worms and within the reproductive organs of the females [4].

This study tested the notion that proteins would play an antigenic role in canines by producing recombinants of the Wolbachia Surface Protein (WSP) as well as part of the FTSZ cell cycle protein. Bazzocchi et al (2000) found that the complete sequencing of the WSP gene of Wolbachia of D. immitis had an open reading frame (ORF) of 708bp coding for 236 amino acids. The ORF of the available partial FTSZ gene sequence was 1008bp coding for 336 amino acids, and both genes were expressed as fusion proteins. It was previously shown that the Wolbachia lipopolysaccharides may be pathogenic determinants in filariasis. This study by Bazzocchi et al (2000) was the first study to date to show experimental evidence that when a filarial nematode is infected with Wolbachia it leads to an immune response against the Wolbachia proteins [10].

Phylogenetic evidence supports a horizontal transmission of Wolbachia amongst arthropods [11]. At some point in evolution, it seems likely that Wolbachia spread from arthropod to nematode, but the data is thus far limited [14]. It has been proposed that endosymbioses between bacterial species and their hosts were results of early infections followed by vertical transmission [6]. On the other hand, it is estimated that about 100 million years ago there was horizontal transmission of Wolbachia between arthropods and nematodes, and this is probable considering that filarial nematodes are arthropod-borne parasites [5]. Also, filarial endosymbionts are more closely related to arthropod Wolbachiae than to any other bacterium where the 16S rDNA or ftsZ gene sequences are available [5].

In a study conducted by Rossi et al, (2010), the effects of the antibiotic doxycycline on the endosymbiont Wolbachia in Dirofilaria immitis was researched. Here it was supported that doxycycline can in fact impair D. immitis. Doxycycline is an effective antibiotic because it reduced the microfilariae as well as microfilaremic dogs, decreasing chances for the parasite to be transmitted by mosquitoes. Furthermore, doxycycline compromised the population of Wolbachia, possibly through two different scenarios. The first of which is that doxycycline reduced or eliminated Wolbachia. The second is that doxycycline disturbed the DNA of Wolbachia, thereby transforming the DNA into material that was unable to be detected [3].

In another 2010 study by Rossi et al, he detected Wolbachia DNA in the blood of dogs that were infected with D. immitis. The DNA was detected through Polymerase Chain Reaction (PCR) of the ftsZ gene, the gene controlling bacterial cell division. This study’s objective was to develop a PCR method that would amplify the ftsZ gene and enable detection of Wolbachia DNA within D. immitis infected canines. From this study, Rossi et al shed light into future therapy control for detecting when the bacterial load is reduced and therefore be able to control the effects of anti-parasitic therapies. [4]

[12] Casiraghi, M. "Mapping the Presence of Wolbachia Pipientis on the Phylogeny of Filarial Nematodes: Evidence for Symbiont Loss during Evolution." International Journal for Parasitology 34.2 (2004): 191-203. Print.

[14] Taylor, Mark J. "Wolbachia Bacteria of Filarial Nematodes in the Pathogenesis of Disease and as a Target for Control." Transactions of the Royal Society of Tropical Medicine and Hygiene 94.6 (2000): 596-98. Print.

[16] Watts, K. "Development of a PCR- and Probe-based Test for the Sensitive and Specific Detection of the Dog Heartworm,Dirofilaria Immitis , in Its Mosquito Intermediate Host." Molecular and Cellular Probes 13.6 (1999): 425-30. Print