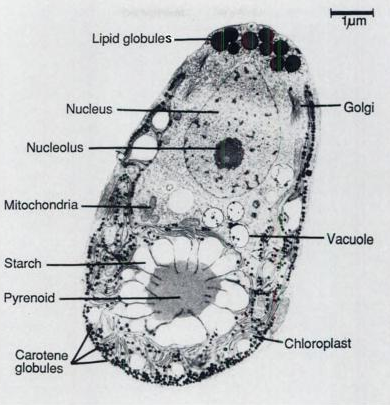 The genus name “Dunaliella” is from M.F. Dunal, a natural scientist that identified similar algae in France in the early nineteenth century. The species name "acidophila" comes from Latin, meaning "acid loving".[3]

The Dunalliella genus of algae was first identified in 1905 by E. C. Teodoresco. It was found in a Rumanian salt lake.[3]

When discovered, it was given the name Spermatozopsis acidophila. After thorough investigation, the genus was later corrected to Dunaliella. The genus Dunaliella is similar to spermatozopsis but lacked the typical spiral cell shape and have only 2 flagella.[2] D. acidophila was first isolated from acidic sulfur springs in Frantiskovy Lazne in the Czech Republic in 1963. D. acidophila is able to live in environments with both extreme levels of acidity and salinity[3], making it both hyperhalophilic and hyperacidophilic. It grows optimally in very low pH environments (pH of 1)[4] with a lower limit of 0.2 and an upper limit between 1.8 and 3.[2] Unlike some red algae, found in similar acidic sulfur environments, it has not been found in environments with high temperatures.[2]

D. acidophila cells are somewhat coccus shaped, about 7.6-12.7 µm long by 1.7-2.3 µm wide[3], and lack a cell wall. Instead they have a "mucilaginous, glycocalyx"[3] cell membrane. This unique covering has a positive membrane potential and allows D. acidophila to live in highly acidic environments by repelling protons and keeping pH near neutral in the cytoplasm.[4]

Because they lack a true cell wall, these cells cannot be gram stained, however they can, be stained with India ink for viewing under the microscope. They have two flagella that begin at the anterior end of the cell. These lophotricous flagella are used for motility and help separate the two daughter cells during binary fission.

D. acidophila has been grown commercially as a source of the nutrient β-carotene. Because of its proliferation in extreme environments, it has been grown in salt lakes and evaporation ponds near Israel, Australia, China, and India.[3]

An alternative commercial application of D. acidophila is in the production of glycerol. Glycerol is D. acidophila's main product of photosynthesis, it can occupy more than 50% of the cell's cytoplasm. [2]

D. acidophila is categorized under the genus Dunaliella, subgenera Pascheria. The genus Dunaliella (Chlorophyceae) has two subgenera; Pascheria and Dunaliella. [5] Most of the freshwater species were placed into the subgenus Pascheria, including D. acidophils. The placement of D.acidophila in this subgenera has been questioned and phylogenetic testing has been done to examine where it should properly fit. Data from the ITS1 + ITS2 testing of the 18 rDNA nuclear gene sequence showed that D. acidophila was actually divergent from similar freshwater species classified in the same subgenre. It was found that D. acidophils is most similar to D. parva, which is categorized in the Dunaliella subgenera .[5] According to this data, it is possible that D.acidophila is wrongly placed in the subgenera Pacheria and should in fact be placed in Dunaliella.

D. acidophila is an alga and gets its energy mainly through photosynthesis. D. acidophilla thrives in conditions nearing light intensities of 43 W/m^2 and temperatures between 23-25°C. Photosynthesis in D. acidophila produces mainly glycerol. This is an extremely important molecule for D. acidophila. It acts to regulate osmotic stress and is used as an energy source during dark hours, when photosynthesis is not available.[2]

When glycogen is not needed, it is stored as starch. This requires ATP and is composed of glucose monomers.[2]

This starch can be converted back to glycogen by the cell during dark hours for metabolism.[2]

In order to survive in such acidic environments, methods for keeping H+ out of the cell must be used. D. acidophila has a low plasma membrane permeability coefficient, letting very few protons diffuse across the membrane.[4] Due to the immense H+ gradient across the membrane in these high acidic environments, some protons will make it into the cell. D. acidophila has also adapted to this by developing high H+ exporting capacity. ATP must be used in order to pump out the excess protons. It has also been found that D. acidophila has positive membrane potential, reducing the flux of protons into the cell from the environment.[4]

D. acidophila is found in natural environments with a very low pH. These environments usually have high levels of sulfuric acid due to metabolic processes of other microbes.[2] Because of this, common places to find D.acidophila include sulfur springs and acidic soils. D.acidophila has been found naturally in Italy, Czechoslovakia, and more specifically in the the Dead Sea in the middle east and the Great Salt Lake in Utah, USA.[2]

(5) Assunção, Patrícia, et al. "Phylogenetic Position of Dunaliella Acidophila (Chlorophyceae) Based on ITS and rbcL Sequences." Journal of Applied Phycology 24.4 (2012): 635-39.