The Ebola virus is a relatively recently described, severe disease-causing pathogen that poses a huge threat to human health mostly within central Africa. This is, in part, due to its high mortality4 and lack of affordable treatment options. Ebola is considered a Biosafety level 4 (BSL-4) agent; classifying it among the most threatening pathogens that exist in the world today. Agents within this category pose severe threats to human health and can be fatal due to the lack of available vaccines and/or treatment options. There are five known Ebola species within the family Filoviridae. Four of these are disease causing in humans and are endemic to Africa6. While the disease has appeared in locations around the world its impact has been minimal in countries outside of Africa11 All of the species within the family cause varying degrees of viral hemorrhagic fever illnesses in humans or animals.4 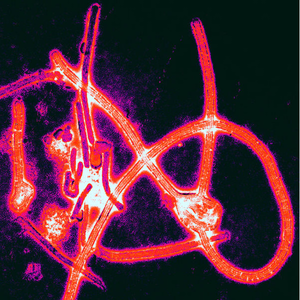 The Ebola virus has nonsegmented negative RNA strand genome, which codes for at least seven proteins, enclosed in a nucleocapsid3. Four of the virus’ proteins comprise the capsid that allows the virus to survive in environments while it is not infecting hosts. The capsid allows the transcription and the translation of the viral genome and is therefore the principle player in the virus’ pathogenicity4.

The virus has many lengthy rods and is much longer than it is wide and is often photographed in a hooked or curved form. The virus is around 80nm in diameter and can be of varying lengths ranging from 600-1400nm1. The virus has been known to infect many different cell types including monocytes, macrophages, dendritic cells, liver cells, and endothelial cells, making it a superior infectious agent. 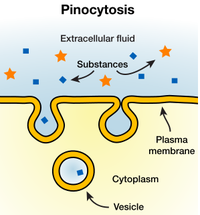 Pinocytosis, the form of endocytosis schematic that is used by the Ebola virus to gain entry to a host cell7.

Ebola seems to be spread through direct contact with individuals, dead or alive, who possess the pathogen. In recent study it has been indicated that the Ebola virus has developed several customized ways to enter host cells depending on the virus' size and what kind of cell the virus wants to gain access to1. However, it seems in most cases the virus prefers to use macropincytosis, a form of endocytosis, to gain preliminary access. The virus requires a special cholesterol transporter known as Niemann-Pick C1 (NPC1) to successfully enter a cell that is linked to the release of the viral genome into a host cell8. Ebola infects a wide range of cells but the most common are mononuclear phagocytes, hepatocytes, and endothelial cells. Like most pathogenic agents, the functionality of a host cell is disrupted by the presence of Ebola and eventually the virus takes over all cell function to produce only more viral copies. Once inside of a cell Ebola does not produce its own cell membrane and instead steals some of its hosts' lipid membrane while budding off to survive and continue infection42. The virons move to new sites of infection in the host and cause major damage to cells as they go.

One of the proteins coded on Ebola's genome is for a glycoprotein (GP); specifically, the viron envelope GP. It is thought to allow the virus to infect macrophages and monocytes where presence of the virus can induce the release of cytokines associated with inﬂammation and fever, hallmarks of the virus. In turn this damages the vascular integrity of the cells of the endothelial cells10. When the endothelial cells become damaged, the most striking symptom of the viral infection occurs: massive hemorrhaging from the mucous membranes10. The virus has been shown to impair the immune function of the body when it infects the phagocytic cells by way of blocking neutrophils (a form of white blood cell) activation of the body, a key factor in the body's defense system, and thus contributing to the spread of the virus throughout the host's body9. Additionally, the cytokines GP encoded on the viral genome contributes to Ebola symptoms by targeting cells of the immune system network and the lining of blood vessels10.

File:WAITING ON IMAGE PERMISSION
Diagram depicting the model of Ebola pathogenesis in humans.source.

In the past it was thought that the virus only infected and caused death in humans and non-human primates mostly in the central African region. The disease has been known to spread from human to human by way of contaminated bodily fluids which happens to be more common in developing nations. Additionally, the main reservoir of infection was thought to be the fruit bat6. But, in recent years, as more study is being conducted on the virus, it seems that there is more to its complex interactions among multiple species. It was found that Ebola can, and does, infect pigs and can pass on to nonhuman primates.6 This is an early sign that pigs may play a role in human infection processes. However, in the pig, the virus seems to be spread through airborne transmission, a dramatic shift from what was previously known about the diseases' method of action. This new information has far reaching consequences for treatment and containment but more research is needed to be completed to fully understand the virus.6

Due to its classification as a level four safety agent, studying Ebola in the lab is a cumbersome feat. The virus is not only well adapted to infect its hosts, but also excels at spreading from host to host. Scientists who choose to work with Ebola must use the utmost caution to prevent the virus' ability to infect them while they conduct their experiments. Full hazard suits must be worn at all times and each suit is throughly examined before entering a containment space. Even so the disease has been known to subvert defenses and infect animals thus causing the non-African outbreaks witnessed over the last 30 years7

A worker from the Center for Disease Control (CDC) demonstrating proper attire worn in BSL-4 labs or what would be worn when dealing with Ebola in a lab setting 12.

The best preventative measure for Ebola came about several years ago in the form of a vaccination. The only downside to this approach is that Ebola outbreaks are random and occur in undefined locations during the span of one year11. Many individuals in Africa do not receive vaccines upon birth due to the cost and are therefore not protected against the virus when it does have its inevitable resurgences. In addition, the vaccination series lasts six months while the disease can often be fatal in less than a quarter of that time.6 These two factors taken together make coming up with a lasting and final solution to the Ebola problem a difficult task for scientists.


The vaccine being investigated currently involves a nonreplicating subunit vaccine5, a class of vaccines. The vaccine targets the viral glycoprotein (GP) by using a lab-synthesized GP which is tagged with antibodies that allow detection of the virus by the white blood cells5. This is the ideal candidate because the vaccine is administered in one dosage and has been shown to be effective in preventing infection in up to 80% of exposed test animals. This is a huge advancement and turn around in the potential treatment of the diseases' unusually high mortality rate. This particular treatment garners extra support due to the fact that it can be stockpiled and stay effective for long periods of time5. This indicates that the vaccine can be stored in endemic locations and pulled out quickly when the first signs of the disease are seen in a population and effectively save many lives by stopping the virus before it starts.5 More research in the field is needed to identify the true reservoirs of the infection in order to better educate individuals living in high risk areas about what to avoid.14

In today's world Ebola is still a huge problem that faces many developing nations within Africa. In 2012 alone there were 3 outbreaks of hemorrhagic fevers around the world due to some strain of the Ebola virus11. One of the factors that makes this disease so clinically challenging is the fact that it is indistinguishable from other agents that cause alternative forms of hemorrhagic fevers3 and therefore is often mistaken for other infections until it is too late. Because some of these diseases are treatable doctors in high risk areas must depend on detailed patient history accounts which can be a roadblock due to language barriers or other societal or cultural issues.

The best way to move forward from the pain and death caused by all of the species of Ebola is to continue research on promising single-step, long lasting vaccines and begin to move them into human trial stages. The fact that some strains of Ebola can have up to an 88%35 mortality rate should be enough of an incentive to push research forward. In addition, the world as a whole needs to start to get serious about ways to make affordable, life-saving vaccinations available to those who need them most.

2. Bharat T., et al. "Structural dissection of Ebola virus and its assembly determinants using cryo-electron tomography". Proceedings of the National Academy of Sciences of the United States of America. 2012. p. 4275-4280.

Edited by (Victoria Rose Gawlik), a student of Nora Sullivan in BIOL187S (Microbial Life) in The Keck Science Department of the Claremont Colleges Spring 2013.