Cystic fibrosis (CF) is an autosomal recessive genetic disorder [1]. It arises from one of many possible mutations in the gene for the Cystic Fibrosis Transmembrane Conductance Regulator (CFTR), which codes for an ABC transport ion channel for chloride and thiocyanate ions across epithelial cell membranes [1]. The result is a multisystemic disorder, primarily affecting the liver, intestine, pancreas, and most critically, the lungs [1]. In the lungs, vast production of phlegm leads to the buildup of thick sputum, making mucocilliary clearance difficult and resulting in recurrent infections with opportunistic pathogens, chronic inflammation, and changes to overall lung structure [4][13]. There is a significant decrease in quality of life in patients diagnosed with CF, as they must perform extremely time consuming tasks daily to clear their airways, adjust their diet, and take large amounts of various medications, such as antibiotics and pancreatic enzymes [10]. Lung infections with opportunistic pathogens are one of the most significant causes of morbidity in CF patients; often leading to chronic inflammation, pulmonary decline, and eventually, death [11]. Over recent years, studies have suggested that CF infections are much more complex than previously thought, with bacterial cell-cell signaling and multicellular organization possibly affecting the severity of exacerbations in CF patients [5]. A better understanding of the ecological interactions occurring within the CF lung could lead to better a understanding of the disease and eventually, better treatment of infections in patients.

The CF lung is a favourable environment for the growth of many opportunistic pathogens. These pathogens are provided with a warm setting and a thick, nutrient rich broth in the form of sputum. From a young age (2-6 years), infants have often already been colonized by Staphylococcus aureusor Haemophilus influenza[1]. As patients age, they tend to be colonized with different pathogens, the next most common being: Pseudomonas aeruginosa, Aspergillus sp., Burkholderia cepacia complex (BCC), Methicillin resistant Staphylococcus aureus(MRSA), and atypical Mycobacteria[1]. P. aeruginosa is often seen as the most important pathogen due to its high rate of colonization (70-90%) as well as high rate of infection (50%) [1][12]. Late stages of disease in CF patients are often accompanied by uniform colonization of the respiratory tract by P. aeruginosa. This generally signals a poor prognosis for the patient [1], though it is not fully understood why. Overall, the cystic fibrosis lung is an environment in which opportunistic pathogens can easily colonize, and eventually, cause infection. The more complex interactions between the host’s lungs and the many different possible organisms that inhabit it are not entirely clear at this point in time, making it a key area for future research.

CF lung Sputum is a nutritionally rich growth media, and has been shown to allow for the growth of Pseudomonas to cell densities exceeding 10^9 cells/mL [2]. Pseudomonas has shown preferential use of proline, alanine, arginine, lactate, glutamate, and aspartate as carbon sources; however, Pseudomonas has also been shown to be capable of using lipids, mucin, DNA, and intact proteins as carbon sources in CF sputum [2]. The pH of CF airways generally ranges from 6.0-6.9, which is well within the limits of optimal growth for many opportunistic CF pathogens [2]. Furthermore, sputum is extremely rich in amino acids. Auxotrophies (in which organisms are unable to synthesize a compound required for growth; they need to take up this compound from the environment) frequently develop for the amino acids methionine, leucine, and arginine and are thought to be a metabolic adaptation to this amino acid rich environment [6].

The Burkholderia cepacia complex (BCC) is a prominent CF pathogen, and is an organism that has been shown to regulate gene expression with quorum sensing (QS) systems [5]. Quorum sensing is a cell-density reliant regulatory mechanism, which allows for gene expression of specific products only when cell density has reached a certain threshold [5]. BCC is known to be capable of two different forms of quorum sensing: AHL and cis-2 unsaturated fatty acids [5]. AHL (N-acyl homoserine lactones) molecules function by binding to consensus sequences in the promoter regions of the gene to be regulated. The result can either be an increase or decrease in that gene’s expression [5]. Cis-2 unsaturated fatty acid signalling systems function via two-component histidine kinase/response regulator systems [5]. These signalling systems play an extremely important role in behaviours such as biofilm formation, which is thought to greatly impact the environment of the CF lung as well as the outcome of an infection. A better understanding of how these systems function within the context of the CF lung could potentially lead to the development of treatments interfering with cell-cell signalling, and thus reduce multicellular behaviours impacting severity of infections, such as biofilm formation. 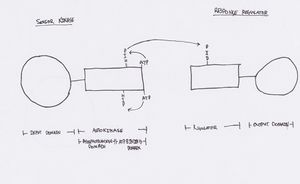 Biofilm formation by pathogenic Pseudomonas aeruginosa and Burkholderia cepacia confers many benefits to bacterium in the lung. Biofilms make complete eradication of any infection nearly impossible, due to the biofilm mode of growth [7]. It is proposed that biofilms deep in the lungs serve as a reservoir for bacteria, which remain metabolically inactive (and therefore resistant to antibiotics); the result being “persister cells” that re-establish infection shortly after antibiotic treatments [8]. Biofilms also protect bacterial cells from the killing function of the immune system including phagocytosis and release of reactive oxygen species [7]. Quorum sensing-inhibiting therapies increase the efficacy of antibiotic treatments; further suggesting that biofilm formation plays a significant role in these infections [5]. Lastly, biofilms have important implications in terms of the entire microbiome of the lung. Biofilms, as well as CF sputum in the lung, have shown to be microaerophilic or even anaerobic growth environments [9]. This relatively recent discovery suggests possible interactions between potentially diverse communities of anaerobic, aerobic, and microaerophilic microbes in the CF lung. 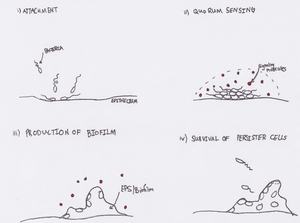 One model of biofilm formation and survival of persister cells. i) Bacterial cells come into contact with epithelial surface ii) sufficient numbers of bacteria leads to intercellular signaling, resulting in the secretion of EPS iii) formation of biofilm protects deeply embedded bacteria from exterior threats iv) bacteria slough off and may reinitiate infection, and/or go on to form new biofilms.