Organisms utilize the electron transport chain to generate electrochemical gradients which enable the formation of energy rich adenosine triphosphate. Microbes have robust and diverse mechanisms in place to conduct or transfer electrons for the energy generating process [4]. Knowledge of such mechanisms can be used to further the development of man-made systems or materials, such as fuel cells or conductive nanomaterials [4].

Cells which have redox-active proteins exposed on the surface are able to transfer electrons directly to an electron acceptor, such as oxide minerals. In the case of the archaeon Geoglobus ahangari, the final step in the electron transport chain involves the reduction of insoluble Fe(III) oxides dissimilatory metal reduction. G. ahangari have heme-containing cytochromes which directly transfer electrons from the outer surface of the cell to the metal oxide [8]. The cell needs to be in close association with the metal oxide to facilitate the transfer of electrons, which can be a limitation to their growth. However, G. ahangari is equipped with flagellum, and can use motility to its advantage to access fresh deposits of Fe(III) oxides [8]. Moreover, the mechanism of direct transfer appears to confer a competitive advantage over microorganisms which make mediators such as electron shuttles [8]. Many dissimilatory metal reducers, like G. ahangari, are found in hot sediments surrounding marine hydrothermal vents. With such active fluid circulation, soluble chelators are easily lost to the environment, and are a waste of resources for indirect electron transfer microorganisms [8].

Bacterium like Geobacter sulfurreducens often form biofilms on surfaces they physically adhere to. Such biofilms are permeable, and allow diffusion of reactants and products, which facilitates the transfer of electrons [5]. There are two models proposed for how electrons are transferred. The superexchange mechanism involves sequential redox reactions that occur between cytochromes in the extracellular matrix, much like G. ahangari [2]. However, as this occurs in a biofilm, electrons hop over short distances to reach the terminal electron acceptor. The nanowire model asserts that electrons are transferred by the bacteria’s pili, which have been found to play both a structural and conductive role in G. sulfurreducens biofilms [2]. PilA, the structural protein found in pili, contains five aromatic amino acids, which have been found to be crucial in conduction [11]. Due to their overlapping pi orbitals, the aromatic constituents enable delocalisation of electrons, and thus, metal-like conduction in the biofilm [2].

Of all known cultures, G. sulfurreducens produces the highest current densities, and as such, has beneficial bioenergy implications [10]. Additionally, even under starvation conditions, G. sulfurreducens can upregulate heme content and continue to reduce metal [1], which implies it could serve as part of a long-lasting microbial fuel cell.

Microorganisms not in direct contact with a surface require the help of other proteins to access electron acceptors.

The ‘’Shewanella’’ species can be found in harsh environments in which electron acceptors are limited. To overcome this barrier, they secrete humic substances such as melanin and menaquinone, and reduced riboflavins, which diffuse to a surface or particle, and are oxidised [3]. Interestingly, it was observed that ‘’Shewanella’’ cells have the unique ability to migrate towards higher concentrations of electron acceptors [7]. Breakthrough research has suggested that soluble riboflavins not only act as shuttles, but provide a spatial gradient which allows the cell to perform chemotaxis towards electron acceptors [7]. Riboflavins shuttle electrons produced during respiration to electron acceptors, which are in turn reduced. The oxidized riboflavin generated becomes attractant for ‘’Shewanella’’ energy taxis, which is highly advantageous to the cell due to the possibility for quorum sensing [7]. Such benefits potentially outweigh the energetic cost to constantly produce and secrete electron shuttles. 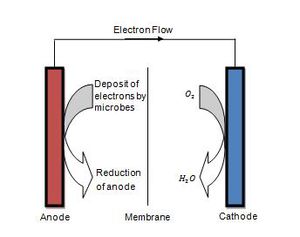 Diagram of a microbial fuel cell. At the anode, microbes, through direct contact or electron shuttles, deposit electrons which flow through the wire to an electron acceptor in the cathode chamber.

Many electron transfer mechanisms have the potential to function in microbial fuel cells (MFCs). This field has attracted increasing attention because of the useful applications of sustainable fuel cells, such as oxidation of contaminants using the anode as the electron acceptor or producing power from wastewater treatment [9].

Metal reducing microbes can be placed at the anode, and the electrons captured through an external circuit utilized for electrical generation [11]. The issue is finding an electron transfer mechanism which would result in highest voltage output, and yet, be able to sustain itself.

Biofilms appear to be a practical application in MFCs. A substantial amount of biomass is present such that a larger electron flow can be obtained [9]. Specific growth of biofilms in MFCs can be controlled, and the higher the growth rate, the more power is generated [6]. Using organisms like ‘’Pseudomonas aeruginosa’’, which transfer electrons via extracellular shuttles, is also a feasible option. This is because genetic manipulation of their proteins is possible, resulting in lower potential electron shuttles, thus increasing efficiency of electron transfer at the anode [12].

Considering how there is a limitation to utilizing MFCs industrially currently due to low voltage production [12], further study and understanding of the above electron transfer mechanisms may eventually allow us to circumvent this barrier.