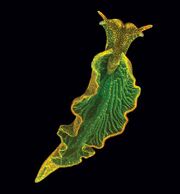 Elysia chlorotica, or the eastern emerald elysia, is a marine Gastropoda species in the Plankobranchidae family and the Sacoglossa clade. Elysia chlorotica (E. chlorotica) has been found in salt water, tidal marshes, shallow creeks, and ponds off the coast of the eastern states and in Nova Scotia, Canada at depths of 0m to 0.5m. [1] The clade that E. chlorotica belongs to are sea slugs that are able to perform photosynthesis, known as "solar-powered sea slugs"[2]. Species in this clade can perform an unusual phenomenon called "kleptoplasty", which means they can use living chloroplasts for their own energy production. After E. chlorotica first feed on algae, the chloroplast are preserved in their special digestive system and used for photosynthesis. The chloroplast remains in E. chlorotica and turns them into bright green. 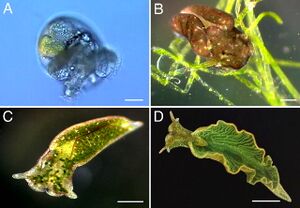 Figure 2.Development stages of E. chlorotica. (A) Larval Stage of E. chlorotica (Scale bar, 100µm.). (B) Metamorphosed juvenile sea slug feeding for theﬁrst time on V. litorea. The grayish-brown juveniles lose their shell, and there is an obligate requirement for plastid acquisition forcontinued development. (C)Young adult E. chlorotica 5 days after having fed on V. litorea. (D)Mature E. chlorotica. As the sea slugs further develop and grow in size, the expanding digestive diverticuli spread the plastids throughout the entire body of the mollusc, yielding a uniform green coloring. https://www.researchgate.net/publication/23469250_Horizontal_gene_transfer_of_the_algal_nuclear_gene_psbO_to_the_photosynthetic_sea_slug_Elysia_chlorotica

E. chlorotica is bilaterally symmetrical like a leaf. Their morphology and green color lets them blend into the marsh environment easily. E. chlorotica's color is largely dependent on the concentration of chlorophyII preserves in the digestive gland; Therefore, they will occasionally appear reddish and greyish in color due to lack of chloroplast[3]. The adult individual are around 3~5 centimeters long, some individuals can grow up to 6cm in length but are more commonly found between 2~3cm. An E. chlorotica has four stages of development: larval, juvenile, young adult and mature adult stages, which can be distinguish by its morphology and coloring. The average life span for E. chlorotica is 11 months, ending just after adults lay their string of eggs in the spring of each year. An annual viral expression in this species caused a synchronized death of all the adults in the population. It happens every generation both in wild and laboratory environments [4].

E. chlorotica's life start with veliger larva. They have a shell and ciliated vellum used for swimming and obtaining food.[5] In the early stage, E. chlorotica larva feeds on small phytoplankton in the ocean water. Larva has two eyespots on each side of its mouth. The Ciliated vellumon at the outside of the mouth can constantly bring food into the digestive tract to the stomach. Then, food will be sorted and filtered in this process before it moves on to the digestive gland. In digestive gland, nutrients in the food will be absorb by E. chlorotica (Figure 2.A).[6]

During juvenile stage, newly hatched E. chlorotica are usually translucent brown with red spots on their bodies. This stage remains until the initial feeding on algae, Vaucheria litorea (Figure 2.B).

Elysid refers to the adult slug’s leaf-like shape which is caused by two large lateral parapodia (a pair of fleshy protrusions like wings for swimming) on either side of its body. This morphology is beneficial as both camouflage and allowing the slug to be more efficient at photosynthesis. Other members of this family are distinguished by their parapodia in addition to bright coloring. The E. chlorotica obtains chloroplasts from the algae to preserve in its special digestive tract. The presence of chloroplasts gradually turn the body color into bright green, making it lose its red spots. It takes 3~5 days for E. chlorotica to reach the threshold and transform to the mature adult stage (Figure 2.D). Before that, some scientists will identify that period as a short young adult or intermediate stage (Figure 2.C)[7].

E. chloroticas are simultaneous hermaphrodites, which means they contain both female and male reproductive organs. It is theoretically possible that they can self fertilize, however, most E. chlorotica will mate with another individual. The egg will be fertilized inside the animal, and the animal will lay fertilized eggs in long chains.

Elysia chlorotica feeds on filamentous algae, the most well known type is Vaucheria litorea. When an E. chlorotica is eating, it punctures the cell wall with its piercing teeth. Then, it holds the algal strand and sucks up the chloroplast and other cells insides the algae. During kleptoplasty, E. chlorotica stores the chloroplasts in their digestive system and uses them for photosynthesis. 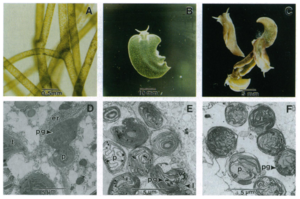 Kleptoplasty is an unusual behavior because the chloroplasts can remain temporarily functioning in the organism, which allows an animal to perform photosynthesis like plants. Recent research suggests that kleptoplasty can be obtained through lateral gene transfer from algae to the sea slug. The symbiotic chloroplasts in the organism remain functioning after 8 months’ starvation (even turning the organism yellowish Figure 3.C); and it is the longest-lived symbiosis of chloroplasts ever reported. Scientists suggest three possibilities to explain this phenomenon: (i) All plastid and nuclear-encoded chloroplast proteins remain stable in the organism, (ii) at the initial stage of symbiotic evolution, some algal nuclear genes may have been transferred into sea slug’s nuclear genome, or (iii) the symbiotic plastids can live individually and remain functioning without the algal cell nucleus and cytoplasm. By isolating E. chlorotica DNA free from interfering mucus[8], researchers concluded the algal chloroplast gene actively transcripts and translates in the sea slug. Genes such as rbcL, rbcS, psaB, psbA, and 16S rRNA have been found in the organism after months of starvation[9]. The RbcL gene, which encodes Rubisco LS, has been found in E. chlorotica DNA. The Rubisco LS protein is also presence after two months of starvation. The level of the PsbA Gene remains constant until 4 months of starvation and starts to decline. The 16S rRNA gene stays at a constant level from start to finish. RbcS also remains at a steady level. These genes are directly engaged in chloroplast encoding which indicates E. chlorotica can constantly encode new symbiotic chloroplasts using gene information even without food (chloroplasts). Furthermore, the transcription and translation of chloroplasts occurred in the situation where plant nucleocytoplasm is absent, which means the regulation of chloroplast gene expression is taken by the sea slug’s nucleus and cytosol, or completely regulated within the symbiotic plastid genome.

However, chloroplasts in E. Cholotica are not inheritable. The acquisition, usage, and maintenance of kleptoplasty will appear on the sea slug after they have been feed V. litorea.