E. adhaerens is a soil-dwelling bacteria belonging to the Alphaproteobacteria in the Rhizobiales family [1,2,3]. E. adhaerens survives in the soil as a facultative predator of soil bacteria, and was initially identified in screens to determine a microbial factor for Micrococcus luteus inability to grow in soil [2,3,4]. Multiple facets of E. adhaerens biology are being exploited for biotechnology applications, including the ability of E. adhaerens to engage in plant transformation when supplied with the Agrobacterium tumefaciens Ti plasmid and E. adhaerens ability to degrade volatile organic compounds [8,9,10]. 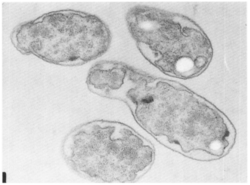 Several E. adhaerens cells, one in the process of budding, as published in Casida, 1982 [3]

E. adhaerens is a terrestrial, rod-shaped Alphaproteobacteria that belongs to the Rhizobiales family [1,2,3]. E. adhaerens survives in the soil as a facultative predator of soil bacteria, and was initially identified in screens to determine a microbial factor for Micrococcus luteus inability to grow in soil [2,3,4]. E. adhaerens is capable of growth on glucose as a sole substrate in buffered media containing salts, indicating that the predatory behavior of E. adhaerens is not obligatory and that E. adhaerens is biosynthetically competent [2].

As with several other members of the Alphaproteobactiera, Ensifer ahdaerens undergoes a polar budding cell division process [2,5]. This process is common to Agrobacterium, Rhodopseudomonas, and Sinorhizobium [5]. While the genetic and biochemical factors involved in E. adhaerens cell cycle have not been directly studied, the Rhizobial cell division process is a current topic of research and mirrors the effort to characterize the Alphaproteobacteria Caulobacter crescentus cell cycle.

E. adhaerens is a resident of the rhizosphere, the layer of soil influenced by the roots of plants. E. adhaerens is thought to survive partially as a bacterial predator, though E. adhaerens is capable of surviving in the absence of host cells [2]. Additionally, as evidenced by the close evolutionary relationship of E. adhaerens to the Sinonrhizobia, some isolates have been recovered that are capable of nitrogen fixation in root nodules [10]. 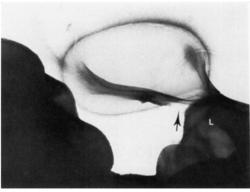 Ensifer adhaerens in the process of attachment to Micrococcus luteus during predation, image taken by Casida, 1982 [3]

E. adhaerens is capable of binding to a range of Gram-Positive and Gram-Negative bacterial cells; however, the host range of E. adhaerens appears to be limited to primarily Gram-Positive bacteria, which it is capable of lysing [2.3]. Attachment to prey bacteria appears to involve appendages referred to as “Bars” by L.E. Casida in the initial publications detailing the predatory process [3]; the purpose of this appendage is, as of yet, unknown. It is possible that bars function in attachment or promotion of nutrient diffusion to Ensifer cells, however neither of these hypotheses have been assessed. Much of what is known about the predatory habits of Ensifer adhaerens was worked out in the early 1980’s, and few molecular details of the process are known. Remaining areas of study regarding Ensifer predation include what genetic potential is required to act as a bacterial predator, as well as the molecular details of the predatory process. With the recent availability of the Casida strain genome, this area can be studied in greater detail with modern molecular genetics [6]. Potential areas to explore this process in greater detail include transcriptomics and forward genetics screens to determine patterns of gene expression during predation and essential predation genes, respectively.

Another potential application for E. adhaerens is in bioremediation [9,10]. E. adhaerens isolates have been shown to break down complex organic pollutants, and environmental isolates are promising for their potential to serve as bioremediation tools [9,10]. The TMX-23 strain of E. adhaerens, for example is capable of breaking down the pesticide TMIA [10]. In addition, the TMX-23 strain also produces secondary metabolites that are beneficial to plant growth and germination [10]. An appealing scenario for the use of this strain would be to seed the rhizosphere surrounding crop plants with this microbe concordant with the use of the TMIA pesticide; this would prevent accumulation of pesticide in the soil and promote the growth of plants in the soil [10].