The surgical mask was first proposed in the late 1800s, after the discovery that bacteria can travel from the nose and mouth via droplets during ordinary conversation. At first, these masks consisted of one layer of gauze, but it was shown that multiple layers and wearing them further from the nose prevented collection of moisture and increased efficiency. The value of face masks were confirmed during the following years, when the number of infections were decreased significantly.

The different types of gauze masks were then tested and compared against each other. By this time, there were four major mask types: an absorbing gauze mask, an impervious mask which deflected expelled air behind the mask wearer, paper masks, and a filter mask with a layer of compressed cotton in between layers of gauze. (Spooner et al, 2016) 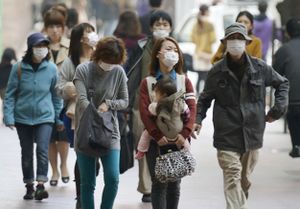 Masks are not commonly worn in the United States, especially compared to east Asian countries such as Japan. This might be in part due to putting the group over the individual. Mask wearing is seen to be both to protect others and to protect themselves from infections, and seems to have solidified its presence in society over the years of less serious ailments such as hay fever to deadly infections diseases like SARS (2003), flu pandemics, and swine flu (2009).

Masks have become normalized in Japan, and in addition to protecting themselves and others, many wear masks as a fashion statement, or to cover up their faces if they are not wearing makeup. (Burgess et al, 2012)

In the United States, however, mask wearers are seen to have serious diseases. For example, a student attending Kenyon College wore a mask after being told he had swine flu. After seeing the mask, no one wanted to touch his things or have any sort of contact with him.

The efficacy of masks has been debated, especially now, due to cost restraints in healthcare and the desire to cut down what is unnecessary.

Generally speaking, deflector masks are not very effective due to only preventing exhalation of bacteria from one’s mouth; the number of colonies in a room were the same, with or without this mask.

A concern with traditional gauze masks is that they tend to billow out when one is talking, allowing the bacteria to exit from the openings.

The filter mask was found to be the most effective of the four mask types mentioned above, as well as effective for a longer period of time and after repeated washing. However, the ideal mask would have good, tight fit around the face as well as high filtration efficiency.

Some argue against the removal of masks, and they cite protection of medical personnel as well as lack of systematic studies to prove the ineffectiveness of masks. (Romney, 2000)

Others say that one can choose whether or not to wear a mask. McLure et al (1998) found that masks also prevent the downward spreading of bacteria from the airway and skin, suggesting it is ideal to wear one when speaking or working in close proximity to the patient. However, they also found no bacteria 90° from the person’s head, so perhaps if someone is not wearing a mask, they could turn their head if speaking is necessary.

Belkin (1997) argues that masks might not be as useful as most people think they are. The purpose of the surgical or face mask is to prevent a patient from becoming infected during or after a surgery. He questions if there are studies that conclusively demonstrate the effectiveness of masks, and if in practice, medical personnel might not even use the masks as intended.