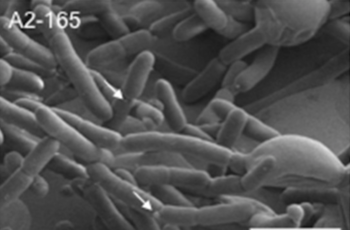 Faecalibacterium prausnitzii colonization in the colon is considered a notable biomarker for a healthy human gastrointestinal tract, and plays a key role in the maintenance of overall gut homeostasis. In the healthy human gut, F. prausnitzii comprises around 5% of the gut microbiota [7, 10, 16, 25], and has been detected at levels up to 15% [7]. Decreased abundance of F. prausnitzii has been linked to gut inflammation and several bowel diseases, including Crohn’s disease, ulcerative colitis, and colorectal cancer [7, 16, 24, 25].

Because of its significant role in gut homeostasis, F. prausnitzii strains are of high interest as a next-generation probiotic [18, 26]. Recent research has focused on molecules and strategies aimed at maintaining F. prausnitzii viable when exposed to varying levels of oxygen. There have been encouraging studies showing F. prausnitzii maintaining its viability for 24 hours under ambient air, by exploiting extracellular antioxidants such as riboflavin and cysteine, among others [12, 10]. These studies are part of an effort to make F. prausnitzii commercially viable as a biotherapeutic remedy and probiotic to help those suffering from bowel diseases [13, 16, 19]. Other researchers have also seen the potential of F. prausnitzii in the agricultural industry as a probiotic for cattle [8, 9].

Faecalibacterium prausnitzii has two main phylogroups: Phylogroup I and Phylogroup II [16]. Within these phylogroups, there are different strains whose genomes have been documented in public databases "with varying levels of assembly and annotation quality" [7]. The genome size of Faecalibacterium prausnitzii exhibits variation, ranging from 2.68 million base pairs (Mbp) to 3.42 Mbp and having wide range of G-C content, varying from 54.9% to 63.0% [7]. Most F. prausnitzii genomes have been constructed from draft assemblies. However, one of the first strains to have a complete genome representation is F. prausnitzii strain A2-165 (Phylogroup II) [7]. This strain of F. prausnitzii has a circular genome containing 3.11 Mbp, 56.3% G-C content, 3,017 total genes, 2,790 coding genes, and 85 RNA genes [3].

In a study by Fitzgerald et al. (2018), 31 genomes of high-quality draft as well as complete genomes were used in a comparative genomics analysis to observe intraspecies diversity. The results revealed a high level of genome plasticity and a relatively low level of average nucleotide identity (ANI) between F. prausnitzii groups. Based on this and other observations, Fitzgerald et al. have proposed to separate Faecalibacterium prausnitzii into two new species-level taxa [7].

Faecalibacterium prausnitzii shows irregular staining, but typically stains like a Gram-negative bacteria [4]. However, F. prausnitzii exhibits dermis characteristics that resemble Gram-positive bacteria, such as those in clostridial cluster IV (Clostridium leptum group) [6, 17]. Typical Gram-negative bacteria have LPS (lipopolysaccharide) on their outer membranes. LPS proteins are ligands for the transmembrane protein, TLR4 (Toll-like receptor 4). These are not found on F. prausnitzii or other bacteria in clostridial cluster IV. This suggests that F. prausnitzii is one of the unique bacteria whose dermis structure does not necessarily align with its Gram-stain [17].

F. prausnitzii is an acetate-consuming and butyrate-producing bacterium [27, 16]. Although it is one of the most common bacteria found in the human colon, it has been revealed that F. prausnitzii needs the presence of B. thetaiotamicron, a primary acetate-producer, in order to colonize the colon [27]. F. prausnitzii produces the short-chain fatty acid (SCFA) butyrate as a product of fermenting indigestible fiber [11]. Butyrate serves as one of the primary energy sources for colonocytes (cells lining the colon) [10] and is a principal molecule that works through various signaling pathways to prevent inflammation, regulate cell proliferation (cancer chemopreventative activities) [22], and maintain the integrity of the colon epithelial mucosa [16, 18, 19]. 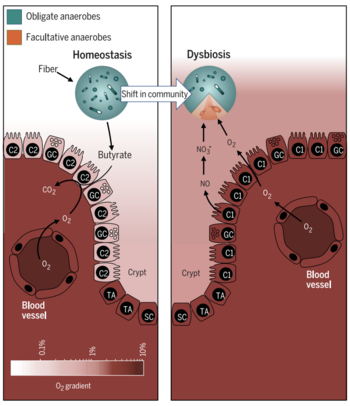 Faecalibacterium prausnitzii is found ubiquitously in the gastrointestinal tracts of both animal and human hosts, and acts as a symbiotic, commensal bacterium within its host [16, 19]. One of the ways in which F. prausnitzii helps maintain a healthy colon is by the production of butyrate via the fermentation of fiber [10, 11]. Butyrate has demonstrated to have various attributes that positively contribute to colonic wellbeing and maintenance [14, 28].

Butyrate acts as a primary metabolite that maintains a symbiotic relationship between F. prausnitzii and colonocytes [10]. As F. prausnitzii produces butyrate, colonocytes respond with increased metabolic activity and cell-sustaining maintenance. These cellular activities deplete oxygen from the lumen of the colon, creating a hypoxic environment for obligate anaerobes to dominate [14]. As a result, the fermentation of fiber into short-chain fatty acids, which are a primary source of colonocyte energy, continues in a symbiotic manner [10, 16]. Higher levels of oxygen in the colon deplete the integrity of the microbiome and result in increased abundance of facultative anaerobic bacteria [14]. This is a tell-tale sign of a gut in dysbiosis and leads to greater inflammation and chronic irritable bowel diseases [14]. Current research has also focused on identifying different Faecalibacterium prausnitzii strains in patients as a biomarker, in order to discriminate between different gut diseases, hoping to lead to improved diagnostics and treatment [16].

Rates of depression and anxiety have been associated with inflammatory bowel diseases such as Crohn’s disease and ulcerative colitis [5]. This may be related to depletion of F. prausnitzii in the microbiome, as F. prausnitzii has also shown to aid in serotonin restoration in the gut [16]. Serotonin is a neurotransmitter, which when reduced to low levels, has been tied to mood-related disorders.

26. Velasques-Manoff, M. (2019). Among Trillions of Microbes in the Gut, Few are Special. Scientific American.

29. "Phenotypic Characteristics of F. prausnitzii strain HTF-F and A2-165." Plos One Journal.