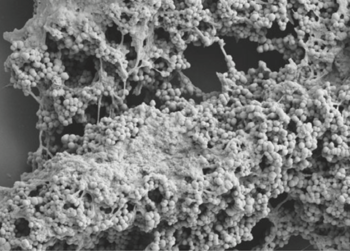 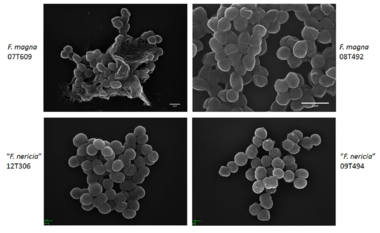 F. magna was previously classified as Peptostreptococcus anaerobius, and it was recognized as a unique species as recently as 1998. [4]

Figure 3. F. magna high-resolution images (B with overlay of A) with assisted advanced sof-touch method with Z scale bars up to 0.3 μm and XY bars indicating 500 nm. [2]

Finegoldia magna has been sequenced and specifically, strain ATCC29328 has been adequately classified. The genome consists of a single, circular, 1.8Mb chromosome along with a 1.9Mb megaplasmid (pPEP1). Colonies of F. magna appear pyramidal in the center, opaque, shiny, whitish-yellow, and gray on the outer ring of the spherical colonies. Compared to other GPACs, the Guanine-Cytosine nucleotide content present within the genome is relatively small at 32.3% and 29.7% with respect to the chromosome and plasmid (pPEP1). The genome is also comprised of unusually high aminopeptidase activity as well as many sortase genes contributing to the microbes pathogenicity; 7 sortases within the plasmid and 4 on the chromosome.

The isolation of F. magna ATCC29328 was more easily identified and classified than other strains of F. magna due to the presence of increased aminopeptidase activity and the outstanding number of sortase genes present within the plasmid. These genomic characteristics give light to the bacteriums’ enhanced interaction with hosts and its ability to uptake amino acids as energy sources. 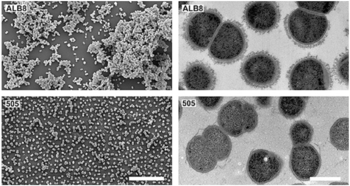