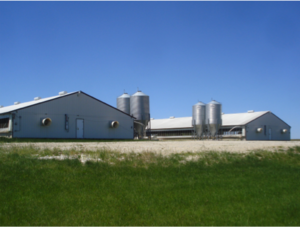 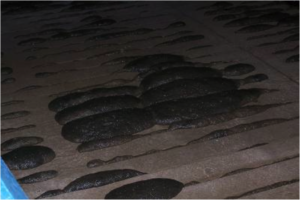 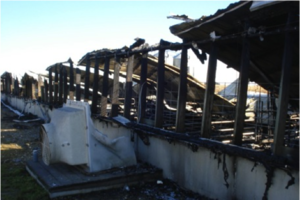 Organic matter in the manure is anaerobically decomposed in the deep-pit storages; this decomposition produces carbon dioxide, methane and other biogases. Foam production traps these gases and accumulates high concentrations of methane (60-65%) [2]. This phenomenon has led to increased incidents of barn explosions and flash fires [1,2]. In addition to increased safety concerns, swine producers are also dealing with management concerns due to decreased storage capacities and reduced ventilation effectiveness.

To date a cause for the foaming has not been identified. One hypothesis is that the foam production is occurring as a consequence of the presence or activity of one or more bacterial populations, or from a by-product of bacterial populations present in the deep-pits [2]. A few studies have analyzed microbial community populations in deep-pit swine manure storages and detected differences in the microbial community composition in manure from foaming and non-foaming storages [4,6].

Classifying the environment physically or chemically is difficult for deep-pit manure storages due to the frequency of changes in feed rations used by the swine industry. However, generally speaking the pH typically ranges from 7.0 – 8.0 and the total solids content will range from 5.0 - 8.0 %. The temperature of the manure will follow a seasonal pattern, colder in the winter and warmer in the summer; the extent of these seasonal variations will depend on regional location. Measured manure temperatures in deep-pit storages range from 5oC - 30oC.

Information on the microbial communities present and microbial processes in deep-pit manure storages is limited. Two studies have used ARISA and T-RFLP DNA fingerprinting methods to analyze the microbial community composition from foaming and non-foaming storages [4,6]. The results from these studies indicate that there are different dominant bacteria populations in foaming and non-foaming swine manure. Manure samples from foaming facilities were found to have higher crude fat, copper, iron, and zinc in the manure, and a greater abundance of specific microbial groups [6]. However, the identification of specific bacterial populations was limited by the taxonomic resolution of the DNA fingerprinting approaches, and by the presence of previously uncharacterized populations.

This is a relatively new area of research with limited published information, there are ongoing studies looking at identifying dominant microbial species and characterizing the physical and chemical properties among foaming and non-foaming manure [3].