Foaming in activated sludge process is a common operational problem in many wastewater treatment plants. The foam can occur in aeration tank, secondary clarifier, as well as in anaerobic digester. Foam in WWTP is normally sticky, viscous and brown in color. It floats and accumulates on top of the tanks, and can take up a large fraction of solids inventory and reactor volume, thus decreasing the effluent quality and control of sludge retention time (SRT). The foam can also overflow onto walkways and surrounding areas, posting severe difficulties and risk to operation and environment. 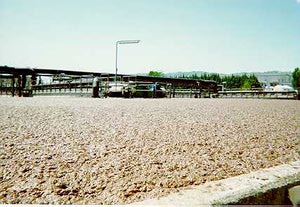 From the mechanism for foaming mentioned above, we know gas bubbles are essential in foam generation. Gas bubbles are involved in many steps of activated sludge process. In aeration tank, aeration and mechanic mixing is employed to ensure enough dissolved oxygen for aerobic degradation of organic pollutants or nitrification. This thus creates abundance of gas bubbles. Other than external introduction by aeration or mixing, gas bubbles can also be produced from biological processes themselves. Both denitrification in secondary clarifier and anaerobic digestion in digester produce gas like N2 or CH4, CO2. These gases favor the generation of foam.

Most surfactants in WWTP originate from the detergents, oil and grease that used in households or industry. The EPS produced by bacteria is also believed to contribute part of the surfactants. Surfactant could stabilize the foaming and allow foam to accumulate. Ho and Jenkins demonstrated the conducive effect of a slowly biodegradable nonionic surfactant in foaming [1,2].

Filamentous bacteria are important in forming stable foam. The growth rate of filamentous bacteria was found not affected significantly for range of pH from 6.7 to 8.0, only slightly decreased at pH 8.4. Optimum temperature of Microthrix parvicella , a filamentous bacterium associated with foam production, was reported around 25 oC, some growth was observed at 8 oC, and poor or no growth at above 35 oC [3].

Filamentous bacterium M. parvicella prefer low oxygen concentration, and were found proliferate in WWTP with spatial or temporal low DO. In Ekama’s study,M. parvicella was eliminated by increasing DO to 2-3 mg/L[4]. As an effective control for sludge bulking and foaming, aerobic selectors with high DO (>2mg/L) are often placed before aeration tank to inhibit the growth of filamentous bacteria[3].

Filamentous bacteria serve as hydrophilic particles which play important role in stabilizing foaming in WWTP. There are two main groups of filamentous bacteria: the most commonly observed group: Candidatus Microthix parvicella , and members of the Mycolata. 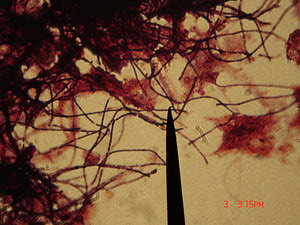 M. parvicella are gram-positive nonbranched filamentous bacteria. They are aerobic, non-fermentative and can reduce nitrate. Although M. parvicella can grow over a wide range of oxygen concentration, they prefer microaerophilic conditions for good growth. The filaments they produced at low DO (~ 0.4 mg/L) are long and regular without empty or deformed cells that observed under high DO conditions[3,5]. 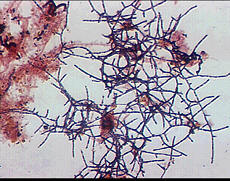 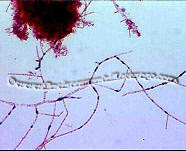 Mycolata, often referred to as "nocardia", are a group of filamentous bacteria that contain mycolic acids in their cell walls. They are under the order Actinomycetales in phylum Actinobacteria, isolates were identified as member in families Corynebacteriaceae, Dieziaceae, Gordoniaceae, Mycobacteriaceae, Nocardiaceae, Tsukamurellaceae and Williamsiaceae. They have two major morphotypes: one with right-angled branching pattern and the other acute-angled branching pattern. Mycolata were found to uptake a wide range of organic compounds, and can use nitrate or nitrite as electron acceptor. Many mycolata can store polyhydroxyalkanoate in cell and present high cell surface hydrophobicity[6].

M. parvicella and Mycolata were reported to be able to utilize various organic compounds as carbon and energy source. The compounds contain organic acids, complex substrates and fatty acids under aerobic, anoxic and anaerobic conditions. The substrates can then be storaged intracellularlly in filamentous bacterium. Intracellular storage of poly β-hydroxyalkanoates(PHA) like inclusions were observed in aerobically-grown M. parvicella under anoxic or anaerobic conditions[3]. Lipid storage granules were also observed in some M. parvicella from activated sludge in nutrient removal WWTP [5]. Mycolata also can form intracellular PHA inclusions for substrates storage[6]. The storage capability of filamentous bacteria allows them survive in harsh conditions during operation(e.g. substrates-limiting in foam, alternating anaerobic-aerobic environment), and out-compete floc-forming and other bacteria in activated sludge, most of which can not uptake and storage substrates anaerobically.

Higher cell surface hydrophobicity were found in cells of M. parvicella and Mycolata than other bacteria in activated sludge. The more hydrophobic cell surface enable filamentous bacteria better attraction to hydrophobic substrates like lipids, long-chain fatty acid (LCFA). Additionally, filametnous bacteria produce many exoenzymes such as lipases, which enhance the degradation and utilization of substrates [3,6].

Conventional oxidizing chemicals like chlorine that used to destroy filamentous bacteria also affect the growth of other bacteria in activated sludge. More selective chemicals for controlling filamentous bacteria are desired. Polyaluminium chloride (PAX-14) was found effective in controlling the foaming caused by M. parvicella. Addition of PAX-14 did not affect the nitrification and COD removal performance. However, the mechanism PAX-14 in controlling M. parvicella is still not clear[10].

Edited by Weiwei Wu, a student of Angela Kent at the University of Illinois at Urbana-Champaign.