It has been estimated that over 80% of terrestrial plants form a symbiotic association with fungi.[1] Species of fungi that reside within living plant tissue without causing symptoms of disease in their host are known as fungal endophytes.[4] Fungal endophytes colonize a variety of both monocot and eudicot plants which suggests that this symbiosis predated the monocot-dicot split 140-150 million years ago.[2] It is also hypothesized that phototroph-fungi associations enabled plants to first colonize land.[3] This mutualistic association could have helped plants acclimate to new environmental stresses such as desiccation, increased exposure to solar radiation, and more extreme temperatures differences.[3]

Fungal endophytes remain an important component of today’s terrestrial ecosystems, and many enable their hosts to thrive in harsh environments. Studies show that fungal endophytes can enhance the drought, salt, and soil temperature tolerance of their host plant in addition to increasing resistance to parasitic fungi and herbivores.[4] With growing concerns about climate change and its effects on agriculture, learning about fungal endophyte conferred drought tolerance has become increasingly important. By influencing plant morphology, development, and physiological and biochemical responses to stress, fungal endophytes can induce mechanisms of drought avoidance, drought tolerance, and drought recovery in their hosts.[8] 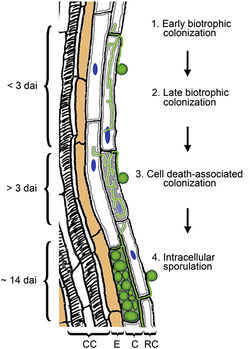 Clavicipitaceous endophytes are associated with grasses.[4] They are typically found within the plant shoots and form systemic intercellular infections.[4] While they are often passed down in the seed through vertical transmission, they may also undergo horizontal transmission.[4] Many Class 1 endophytes produce alkaloids to protect their host plant from herbivory by insects and mammals, and studies have shown some Class 1 endophytes to confer drought and metal tolerance.[5][8] Neotyphodium coenophialum , for example, stimulates plants to develop more extensive root systems and longer and thinner root hairs which increases root surface area for improved water and mineral acquisition. [8]

Nonclavicipitaceous endophytes are highly diverse and have been isolated from every major lineage of land plant, which includes nonvascular plants, ferns, conifers, and angiosperms.

Class 2 endophytes are usually found in the roots, stem, or leaves of their hosts.[4] Like Class 1 endophytes, they can also be transmitted either vertically through the seed coat or horizontally. [4] They are unique in that they can confer habitat-specific stress tolerance to their hosts, and, as a result, they infect a higher percentage of plants in high-stress environments.[4] They often increase root and/or shoot biomass in their host.[4]

Class 3 fungal endophytes colonize the shoot of plants while Class 4 endophytes colonize plant roots.[4] Both are horizontally transmitted.[4] Unlike the other classes, Class 3 endophyte colonizations are highly localized, and a diverse number of species can colonize an individual plant.[4] Few studies have been performed on Class 3 and 4 endophytes and little is known about their ecological role or their ability to confer tolerance. 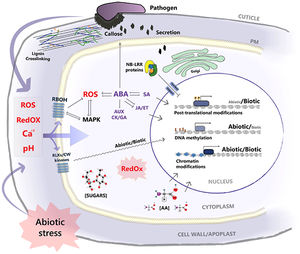 Figure 2. Signaling pathways of abiotic and biotic stress at the cellular level. Both types of stress factors affect the homeostasis of chemical signals such as Ca2+, ROS, and pH levels. Changes in these levels due to abiotic stress can affect the integrity of physical barriers against pathogens. Both abiotic and biotic stresses also share signaling nodes such as RBOHs (which produce ROS), MAPKs (signal cascades that regulate stress and hormonal responses), receptor like kinases (RLKs) and other cell wall (CW) kinases which are used to regulate gene expression. The stress hormone Abscisic acid (ABA) is central to plants’ abiotic stress response. It inhibits hormones responsible for growth and development such as auxin (AUX), cytokinin (CK) and gibberellin (GA) and triggers increased generation of ROS as well as plant defense signaling (JA). Redox state and metabolite concentrations of sugars and amino acids (AA) regulate post-translational modifications. Changes in chromatin and DNA methylation status activate transcription factors to bind to stress responsive gene promoters to alter gene expression. [13]

Osmotic adjustment is a biochemical mechanism that helps plants tolerate drought and salt stress. [15] It is an essential process that enables plants to maintain water uptake and metabolic processes.[15] Increasing the levels of solutes such as water soluble sugars, prolin and other amino acids, and loline alkaloids leads to a more negative osmotic potential.[15 This improves cell hydration so that the plant can maintain turgor in leaf tissue and in other metabolically active cells to stay alive. [15]

The percentages of osmotically active carbohydrates such as glucose and fructose are known to vary inversely with soil moisture levels. [8] [16] Plants rely on carbohydrates during drought stress because their leaf area becomes insufficient to produce the energy the plant needs. [16] Endophyte colonized and endophyte free plants would be expected to have similar levels of carbohydrates after the same drought stress, yet Arachelvaleta et al (1989) found that endophyte colonized plants recovered more quickly. [16] They hypothesized that the high level of auxin production by fungal endophytes increased the efficiency of reserve carbohydrate mobilization and translocation and that this efficiency was more important than actual levels of available carbohydrates. [16]

Additionally, Redman et al (2015) examined the osmotic concentrations in plants grown with and without heat-stress tolerant fungal endophytes. The differences in pattern between the two groups lead them to conclude that symbiotic plants do not rely solely on increasing osmolyte concentrations.[6]

Abiotic stresses such as drought result in the overproduction of reactive oxygen species (ROS) [10] These highly reactive metabolic products act as signaling molecules; however, when their levels are too high, they cause oxidative stress and damage proteins, lipids, and DNA. [10] [11] ROS control many plant processes such as growth, abiotic stress response, cell cycle, and programmed cell death because they influence the expression of genes. [10]

When the stress hormone Abscisic acid (ABA) is highly induced by water stress, it triggers an increase in production of ROS. [17] Plants have developed a complex antioxidant defense system to respond to increased ROS levels and employ scavenging enzymes such as superoxide dismutase (SOD), catalase (CAT), peroxidase (POD), glutathione reductase (GR), and glutathione peroxidase (GPX) to adjust ROS homeostasis. [17] [18] Endophytes known to promote drought tolerance have also been found to have high levels of loline alkaloids. [7] Future experiments could test if these are present in sufficient concentration to prevent the denaturation of macromolecules or reduce the number of reactive oxygen species. [7]

Shi et al. (2012) compared natural variations in drought responses among three types of Bermudagrass. The variant Tifgreen performed best in the drought stress, showing the highest leaf water content and survival after 28 days of drought treatment. [18] It had the highest levels of proline and sugar (osmolytes) and the lowest leaf electrolyte leakage, an indicator of cell membrane damage. [18] It also had the highest antioxidant enzyme activity and the lowest levels of hydrogen peroxide (H2O2) and malondialdehyde (MDA), both indicators for ROS level and oxidative damage. [18] 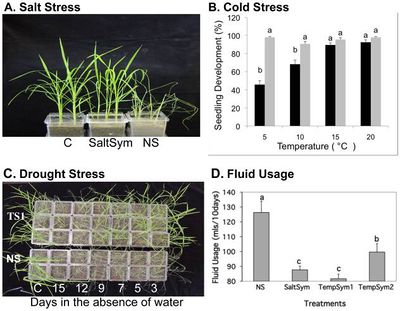 Redman et al (2015) isolated three Class 2 fungal endophytes from rice relatives to test how well they would confer abiotic stress tolerance to rice plants. Fusarium culmorum (SaltSym) was isolated from the coastal plant Leymus mollis which is exposed to high salt stress, while Curvularia protuberant (TempSym1 and 2) was isolated from Dichanthelium lanuginosum which grows in geothermal soils that can reach temperatures of up to 60 degrees Celcius.[6] Rice plants with and without the fungal endophytes were grown in greenhouse conditions and subjected to treatments of salt, cold, and drought stress.

The study found that rice plants inoculated with the endophytes (S) showed no cost when grown in non-stressful conditions, but the percentage of colonized plants decreased from 100% to 65%.[6] Plants grown under continual stress, however, maintained 100% colonization.[6] All three endophytes treatments took 2-3 times longer to wilt than the non-colonized plants.[6] While NS plants wilted after 3 days, SaltSym, TempSym1, and TempSym2 delayed wilt until after 9, 9, and 7 days respectively (Figure 3C).[6] Over 90% of the NS plants had died after 5 days of drought stress, while 70% of S plants died after 12 days (Figure 3C).[6] The water consumption of colonized plants grown in stressful environments decreased 20–30% while their growth rate, reproductive yield, and biomass increased (Figure 3D). [6] Non-infected plants, on the other hand, lost shoot and root biomass when exposed to stress. [6] ]]

All plant species used in this experiment were members of the family Poacea but belonged to different subfamilies. [6] While the mechanism remains unknown, the isolated fungal endophytes successfully conferred drought tolerance to the rice plants. This supports the idea that the necessary symbiotic communication between the fungi and the plant was conserved within the family. [6]

Fungal endophytes have many potential applications in agriculture and conservation, yet there is still much that is not known about plant-fungi symbiosis and the mechanisms behind it. A more complete understanding of fungi’s role in plant community dynamics and ecosystem stability will inform conservation efforts around the world. While many fungal endophytes show habitat-adapted symbiosis, the fact that there is still lower biodiversity in high stress environments indicates that plants require more than just a fungal endophyte in order to be successful. [6] Nevertheless, fungal endophytes’ ability to confer resistance to pathogens and deter insect herbivory gives them promise as alternative solutions to chemical pesticides and fungicides. Moreover, introducing fungal endophytes to crop may increase their drought tolerance by reducing their water consumption and increasing nutrient uptake. This may be used to increase crop yield in arid climates and mitigate the negative effects of climate change.


Edited by Sarah Barnes, a student of Nora Sullivan in BIOL168L (Microbiology) in The Keck Science Department of the Claremont Colleges Spring 2014.