A Microbial Biorealm page on the genus Gfaj-1 NEUF2011 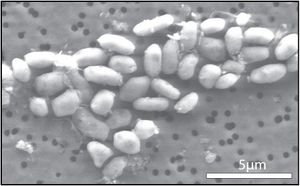 GFAJ-1 is not a species but is considered a new strain of the family Halomonadaceae [9].
GFAJ is an acronym for "Give Felisa a Job," Felisa being the author of the first paper on GFAJ-1 [15]

GFAJ-1 is a bacterial species originally isolated from Mono Lake, California. Mono Lake is an alkaline body of water with an unusually high salt concentration. The lake also boasts high arsenic concentrations [1]. GFAJ-1 uses arsenic in place of phosphorus to support life. GFA-1 is a known strain of the Gammaproteobacteria class. Arsenic in its arsenate form is often toxic to cells due to its similarities to phosphate. GFAJ-1 is challenging the accepted hypotheses that life can only be sustained with the minimum essential elements: Hydrogen, Carbon, Oxygen, Nitrogen, Sulfur, and Phosphorus. In a phosphorus-deprived environment, NASA researchers have found that GFAJ-1 was able to grow and reproduce using and incorporating arsenic into cell mass in place of Phosphorus [1]. Researchers have suggested that this strain of bacteria have a type of arsenic adaptation that will allow the organism to survive with low levels of phosphorus [3]. The mechanism for this pathway is still unknown and there is ongoing research to learn more about the bacteria. The discovery of a potential to sustain life by substituting arsenic for phosphorus could lead to many more research projects and change the guidelines for minimal environments capable of sustaining life.

The Genome of GFAJ-1 has not yet been fully investigated. Arsenic lies below phosphorus on the period table which reflects the fact that they have similar properties. They have similar atomic radii and identical electronegativity. If an organism contained mechanisms to adapt to the instability of arsenic baring compounds in biological pathways it is hypothesized that this element could be incorporated into biomolecules without the toxicity [3]. The theory behind GFAJ-1 is that it incorporates arsenic into its DNA in place of phosphate, however this has not yet but proven. This would involve the addition of dAMA, dTMA, dGMA, and dCMA (structural arsenic analogs of dAMP, dTMP, dGMP, and dCMP respectively) into the DNA. By using radio-labeled in experiments scientists were able to conclude that there is a strong possibility that AsO43- is incorporated into the DNA in place of PO43- [3]. Analysis showed elevated levels of As and low levels of P in extracted, gel-isolated DNA from cells grown in As+/P- medium. Further studies showed that the bond distances of As-C and As-O are consistent with the x-ray model of the organisms' DNA [3]. This indicates that AsO43- is in a similar position as PO43- in a DNA backbone. 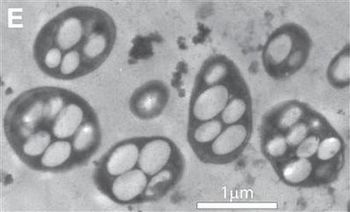 Figure 2: A picture of the internal structure of GFAJ-1. Photo courteous of FEMS Microbiology Ecology [3]

GFAJ-1 is rod-shaped (bacillus) bacterium known to be an extremophile or more appropriately, a halophile meaning it is capable of living in environments with extremely high salt concentrations that would kill most other bacteria. GFAJ-1 like other halophiles, is able to produce osmoprotectants which build up in the organism’s cytoplasm along with other ions to deal with the hypotonic environment and ultimately protect against high salt levels [5]. Living in a high salt environment means water will inherently want to move down the concentration gradient and travel out of the cell into the outside environment, so any halophilic organism must deal with this problem.

Not much is known about the cell structure of GFAJ-1, but the first study on the organism by Wolfe-Simon et al. reveals large vacuole-like structures (see Figure 2) that appear to increase in size upon the addition of Arsenic into the organism’s environment [3]. These vacuoles may be crucial in GFAJ-1’s survival in an arsenic rich habitat, but more research needs to be completed in order to further understand this concept. 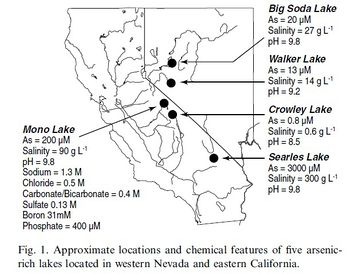 The recently discovered GFAJ-1 bacterium, isolated from Mono Lake in California(see Figure 3), has provided researchers substantial information pertaining to the growth of organisms in extremely harsh environments in which life was thought to be nearly non-existent. Mono Lake has quite abnormal qualities in that it is hypersaline and a highly alkaline body of water. The salt content of the lake had been measured to be approximately 90 grams/liter and the pH to be around 9.8 [2]. But most interesting of all is that Mono Lake has one of the highest natural concentrations of arsenic in the world - with a concentration of roughly 200μM. These high levels are thought to occur because the arid environment has significant evaporation over precipitation and the abundance of hot-springs in the area [3].

It had been found that many bacteria are known to be able to withstand high levels of arsenic and have the molecular adaptations in order to so. However, when starved for essential nutrients, in particular phosphorus, the GFAJ-1 bacterium will actually incorporate arsenic from the water into its molecular machinery, replacing phosphorus, to continue living and growing [4].

Because so little is known about this recently discovered bacterium, it still very much unclear as to how it actually survives by replacing phosphorus with arsenic. The original study of the GFAJ-1 bacterium exhibited arsenic-dependent growth through means of AsO43- uptake and assimilation into key biomolecules that include nucleic acids, proteins, and metabolites. However, when provided with phosphorus, GFAJ-1 grew significantly better indicating that the bacterium is not purely an arsenophile [3].

The contributions made by this arsenophile to the environment is also unclear, however it is thought to be linked to an environmental flow of energy particularly the mobilization of solid phase arsenic found in minerals to an aqueous phase. It is speculated that the arsenic cycling nature of the bacterium negatively contributes to the contamination of drinking water of nearby wells [3]. 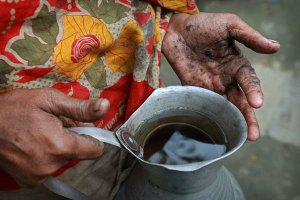 Although the GFAJ-1’s pathology is not well-researched, it is speculated that GFAJ-1’s participation in the arsenic cycle in Mono Lake has potential to contaminate drinking water (as shown Figure 4) with increased levels of arsenic in nearby wells. Increased exposure to As in contaminated drinking results in an accumulation of As in many bodily tissues resulting in hyperpigmentation and keratosis of the hair and skin. People exposed to As also have an increased risk of skin, internal organ, and lung cancers as well as cardiovascular disease and neuropathy [7].

A recent publication [10] by Fekry et. al. attempts to disprove the original GFAJ-1 study by Wolfe-Simon et. al.[3]. The authors claim that replacing Phosphorous for Arsenic is highly unfavorable and is not biologically feasible. The paper suggests that in order for GFAJ-1 to survive on Arsenic it would need to incorporate Arsenic into its DNA backbone through the use of arsenodiester linkages. Although Arsenic and Phosphorous are very similar the arsenodiester linkages (as compared to the normal phosphodiester linkages) would be very unstable. Fekry et. al. argues that water would almost immediately cleave arsenic from the backbone since this bond is said to have a half-life of a mere 0.06 seconds. On the other hand, phosphodiester hydrolysis occurs very slowly. To support this claim the authors bring up a previous study [11] that suggests water is easily able to break arsenate esters. Based on these arguments, it seems unlikely that GFAJ-1 or any other bacteria could utilize Arsenic in replacement of Phosphorous, although as the authors mention it is not impossible.

Another recent study has been used to discredit the work done by Wolfe-Simon et al. In response to this article, Cotner et al. argue that the original paper had taken their own research and used it out of context [12]. Wolfe-Simon argues that the levels of phosphorus incorporated into the GFAJ-1 cell were found to be significantly below amounts required for normally sustaining life in bacteria. They measured this significant difference using the data found by Makino et al. However, this data collected was the result of a study only on Escherichia Coli cells that have an unusually high amount of phosphorus due to their environmental conditions [13]. Cotner et al. conducted another study [14] of the amount of phosphorus content found in bacteria in freshwater environments, a much closer approximation to the environment that GFAJ-1 is grown in. In this case, the phosphorus content found in GFAJ-1 fell within the range of observed phosphorus content levels of these bacteria. This response article provides another error in the argument presented by Wolfe-Simon et al. as to the possibility that the bacterium GFAJ-1 can substitute arsenic into its biosynthesis.

Although it is still not proven that this microbe can incorporate this seemingly toxic element into its biologics, the possibility reveals a pathway for life on other planets. The fact that this organism not only can tolerate living in high concentrations of arsenic, which other organisms are capable of, but incorporate into its biology opens the door to the thought that there could be life forms out there that are able to function without the 6 essential elements for life as we now know it. The findings also help contribute to the current conversation about what is known as the shadow biosphere. The shadow biosphere is a hypothetical microbial biosphere which consists of organisms that have different biological mechanisms than known life. The thought is that some organisms have not yet been discovered because scientists are targeting the biochemistry of life forms as we know them and do not account for extremely different life forms [16].