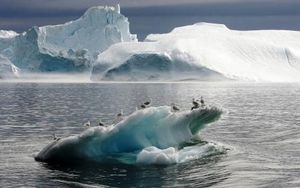 Glaciers are notably receding as a result of global warming.

Glaciers are large and ancient bodies of ice that form in low temperatures from the accumulation of snow and water [1]. They cover approximately 10% of landmasses on Earth [1], contain 75% of the freshwater of the planet [2] and serve as large reservoirs of diverse microorganisms [3] that have adapted to the freezing temperatures, limited nutrient availability, and variable light conditions [1]. The increase in human activity, such as the burning of fossil fuels and release of greenhouse gasses, has led to global warming which has consequently augmented the melting of glaciers [1] and could disrupt biogeochemical processes of the glacial ecosystem, significantly impacting the niches of many microbes [4]. 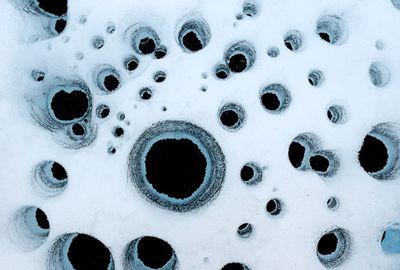 A top-down view of sediment filled cryoconite holes located on the surface of glaciers. 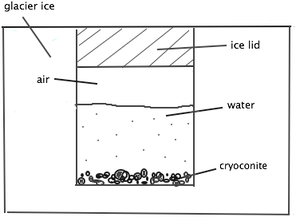 Side view of a cryoconite hole within surface glacier ice.

The surface of glaciers contains many small depressions referred to as cryoconite holes, which can range from a few centimeters to several meters in diameter and contain a variety of diverse microorganisms in the bottom sediment layer [5]. These water filled holes form when debris and dark-coloured organic matter from the activity of primary producers or human generated pollutants accumulate on the surface and absorb solar radiation, melting the ice [1]. Some cryoconite holes remain open to the atmosphere, whereas some are covered by a layer of frozen ice that can be up to 36cm thick [5].

The subglacial environment refers to the sediment rich area under glaciers composed of liquid water and ice sheets. Anoxic conditions dominate in these environments due to the lack of light and higher prevalence of rocks compared to water [1]. The bedrock contains essential nutrients such as organic carbon, nitrogen, and phosphorous which can be released by microbial chemical weathering and is crucial for the survival of the microbes [6]. The anoxic conditions may also allow the microbial production of methane, which is released when glaciers retreat [6].

The two main primary producers found on the surface of glaciers include filamentous cyanobacteria, which are localized to cryoconite holes, and green algae, which are found on the bare surface. Both of these organisms utilize carbon dioxide from the atmosphere and solar radiation as an energy source to produce organic matter. Since the solar radiation on the surface of glaciers can reach levels that are harmful to the photosynthetic microbes, the algae produce a dark coloured pigment that assists in scattering excess solar radiation, allowing them to successfully thrive in this extreme environment [7]. 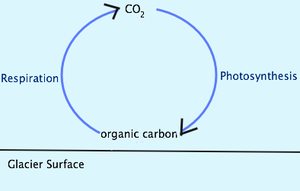 Heterotrophs are also present on the glaciers, in particular, bacteria from Alphaproteobacteria, Betaproteobacteria and Bacteroidetes. These microbes are able to break down the organic carbon synthesized by primary producing microbes, nearby vegetation, or pollutants that have been deposited on the surface of the glaciers, and as a result produce carbon dioxide which is released back into the atmosphere. The remainder of the organic carbon that has not been degraded by the heterotrophs can be released into nearby marine ecosystems through the glacier melt water [7].

A recent study found that DNA repair mechanisms could operate in freezing conditions, allowing researchers to infer that cells may not be dormant when trapped under ice. Frozen suspensions of Psychrobacter arcticus 273-4 were able to restore and reassemble their microbial chromosome in proper order after it had been fragmented to smaller pieces during exposure to DNA damaging ionizing radiation, to stimulate what they would have naturally experienced while being buried in permafrost for approximately 225,000 years [8].

This genus contains psychrophilic to psychotolerant microbes that are common to the cold environment of glaciers and can survive in temperatures as low as -10°C. They are halotolerant, aerobic, non-motile, gram-negative coccobacilli [9].

Although there are microbes present on glaciers that can degrade some of the persistent organic pollutants on the surface of glaciers [11], they are not very abundant. In fact, it was recently estimated that only 7% of the organic carbon stored in debris on glaciers is used by heterotrophic organisms [11]. The dissolved organic matter, whether it is from primary production or pollutants, remains mostly unchanged and is carried into the melt waters where microbes at the base of the food chain rely on it [11]. The change in the carbon quality and amount of ancient carbon released due to global warming threatens to significantly modify marine ecosystems, suggesting that the marine food webs may differ considerably from previous years. Evidence of microbes actively restoring their DNA or evolving via horizontal gene transfer while entrapped in ice also suggests that the recession of glaciers could release excessive amounts of both ancient and novel microbes into the marine environment, which could have an effect on the existing marine environments.