A Microbial Biorealm page on the genus Gloeocapsa magma 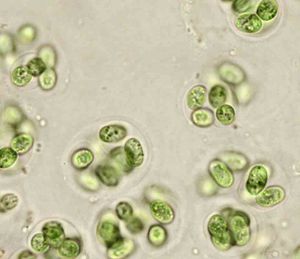 Gloeocapsa magma is a photosynthetic cyanobacteria consisting of a small group of algae spores [8]. It is responsible for the black/dark green stains that form on roofs. These black stains are the bacteria themselves in mass amounts covering the surface of the roof shingles. Gloeocapsa magma has been around historically and up through the present, except only in the recent decades has it been considered to have detrimental effects worthy of prevention. This cyanobacteria causes substantial destruction revolving around shingle decay and loss of reflective power. Over time, Gloeocapsa magma begins to break down the contents of the shingles by feeding off of the limestone granules embedded in the shingles and this decreases the roof’s ability to reflect ultra-violet rays of light. Also, the quality of the shingles slowly diminishes [10]. They have been found to curl up at the corners as well as form raised humps on the surface. This ultimately can result is broken or disintegrated shingles. In the long run, this has been known to increase air conditioning bills and lead to more frequent roof repair and reconstruction [8]. The main preventative strategy known to date is frequent (annual) roof cleanings using roof algae cleaners [2]. Installing copper or zinc strips along the roof boarder also inhibits bacterial growth by killing off new colony formation.

The genome of Gloeocapsa magma has not been specifically published online; however, all cyanobacteria have a common core genome [4]. A study revealed that 128 different strains of cyanobacteria have a genome that lies at about 1.6 x 109 to 8.6 x 109 daltons in length. The core of this genome contains around 1000 proteins known as cyanobacterial clusters of orthologous groups (CyOGs) [7]. These proteins are involved in key cellular functions like DNA replication, transcription, translation, metabolism of food and energy and other important “housekeeping” functions. The core genome of cyanobacteria contains not only CyOGs, but also crucial photosynthesis-related genes, a cyanobacteria’s main pathway for obtaining energy to function.

Gloeocapsa magma is a gram negative, cocci shaped cyanobacteria that tends to cluster in groups [6]. It is green in color and known for its use of this green pigment called chlorophyll, located in thylakoids, as a photosynthetic pathway. The only organelles in the cytoplasm of these bacteria are ribosomes. As a cyanobacteria, Gloeocapsa magma also takes part in the nitrogen cycle by converting nitrogen to other organic compounds [5]. Gloeocapsa magma spores are spread mainly by wind but also by animals and locate themselves on the north side of roofs where the lack of sunshine stimulates their growth and formation [10]. Now, most importantly, the bacteria need to find a food source to survive. The necessary nutrients needed come in the form of crushed limestone, which is used as a filler in roof shingles for support and strength. However, for Gloeocapsa magma, limestone is a superb source of key nutrients for colony growth. With the moisture provided by lack of sunlight, and the perfect food source, these bacteria can then begin growth and reproduction, slowly taking over and covering the entire roof surface. Gloeocapsa magma grows best in humid environments where moisture is kept locked in. Yet, when beams of sunlight hit the rooftops, this bacteria has a unique method for survival. In the presence of strong sunlight, Gloeocapsa magma forms a black/dark green sheath around itself as a form of protection from ultra-violet rays [8]. This pigmented covering is what people see as black streaks covering house roofs. Over time, the bacteria will begin to die off and the black covering of the dead cells forms a stain on the roof that only increasingly gets worse over time. The bacteria’s ability to produce a secretion allows it to stick well to the roof surface even after cell death. To continue their life cycle, colonies of Gloeocapsa magma dissociate into small groups of cells that can then be transported via wind or animals and relocated to a new site where growth and division will begin [6].

Gloeocapsa magma, as previously stated, inhabits the roofs of houses, feeding off of the limestone filler and the nutrients trapped in the moisture rich shingles [10]. The most beneficial habitat for this particular bacteria involves a humid, damp environment with little access to sunlight. For this reason, the bacteria begin colony growth on the northern most side of houses because of its limited sun exposure.

Gloeocapsa magma has little contribution to the environment, but it does fix nitrogen and convert it into organic compounds like nitrate and ammonia [5]. This contribution is beneficial to other organisms that feed off of organic compounds. Therefore, it forms symbiotic relationships with many forms of fungi and legumes that form on rooftops because they benefit from the organic compounds that the bacteria produce during the nitrogen cycle. When cyanobacteria like Gloeocapsa magma form symbiotic relationships with fungi, they intertwine very closely and often form new organisms called lichens.

An extremely interesting feature of Gloeocapsa magma is its ability to form a deeply pigmented outer coating encapsulating itself for protection from high UV exposure [1]. The protective sheath is formed only in response to strong sunlight, while bacteria in low light stay green in color. Studies have been done and scientists have discovered compounds called mycosporine-like amino acids (MAAs) that possess a role equivalent to that of sunscreen. MAAs have a high absorbance value in the UV range, suggesting that they take part is absorbing the intensity of sunlight to decrease its effect on the bacteria. When cyanobacteria were put in the presence of strong UV light, there was an increase in the production of MAAs. In addition, high concentrations of MAAs were found in the region of cyanobacteria where scytonemin exists, a known cyanobacterial sunscreen pigment. The ability of Gloeocapsa magma to produce a highly pigmented outer sheath increases its durability, allowing for it to withstand drastic changes in weather and temperature.