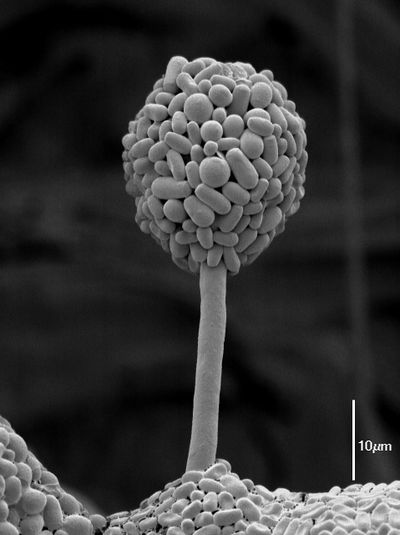 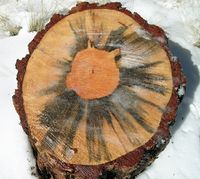 G. clavigera is a species of sac fungus that parasitizes pine trees. This fungus is one of the microbes in the blue stain fungal infections that plagues pine trees throughout Canada and the United States but despite its name this infection is often grey or black[1]. The fungus, and thus the infection, is passed between trees by the bark beetles (Scolytidae). The combined pathogenicity of G. clavigera, and other fungi, with the mobility of the mountain pine beetle have resulted in the death of over 19 million acres of pine forest throughout the Americas[4].

This fungus’ 29.8 Megabase sized genome was first sequenced in 2010, forming 18 supercontigs and since it is a fungus it is hypothesized that this genome is linear. From the sequence the researchers predicted 8,314 protein-coding genes and found evidence that they may be heterothallic, which is defined as requiring two compatible partners to reproduce sexually[3].

The most unique component of G. clavigera’s metabolic ability is that it has evolved to break down the terpenoids produced by trees. A subset of these terpenoids are volatile molecules produced to oxidize and kill pests, but this fungus has evolved the ability to detoxify these molecules and can even survive with these as their only carbon source[2,3]. These fungi produce both sexual and asexual fruiting bodies that spread sticky spores onto the Mountain Pine Beetle, which take those spores to other trees where the spores become active and continue proliferating[2,3].

Mutualism with The Mountain Pine Beetle 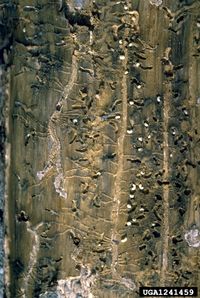 Galleries of the Mountain Pine Beetle. Taken from the Forest Service [3]

G. clavigera has evolved a symbiosis with mountain pine beetles. The mountain pine beetle has evolved a specialized structure in its head, known as the mycangium, that carries spores of symbiotic fungi, such as G. clavigera, with them as they colonize new trees[4]. The adult beetles bore into trees forming complex structures, known as galleries, to lay their eggs into. Through their tunneling the beetles distribute these microbes which become active and infect the tree. As G. clavigera proliferates through the tubules of the tree it stuffs them up preventing the flow of sap, terpenoids, and any other tree defenses to the outer layer of the living wood, where the beetles are living, thus protecting them[1].

Grosmannia clavigera is one of the species of fungus that causes blue staining in wood, which is often actually gray or black. This coloration is the result of the fungi melanizing as it spreads. As the fungus spreads throughout the wood they continue to stop up the trees tubules, preventing the flow of water, sugars, and other nutrients throughout the tree resulting in the eventual death of the tree. G. clavigera feeds off of the tree's resources during this process, it has even evolved the specialized ability to feed on the terpenoids the trees produce for defense and other purposes[1,2,3].

Fungi: Not just a mushroom