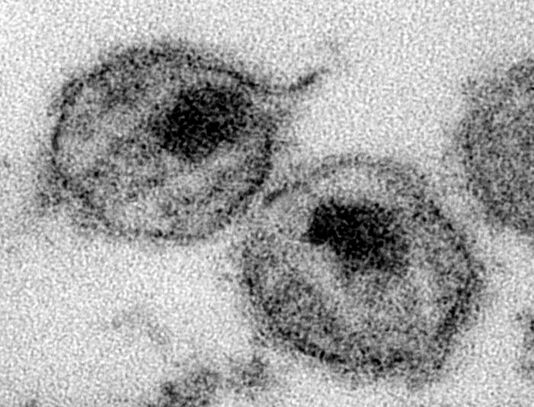 TEM image of HIV, showing the structural details of the virus. By Dr. P. Feorino and A. Harrison at the CDC.[1].

The human immunodeficiency virus is a virus that works by infecting the body and attacking the immune system. It is an RNA virus that spreads rapidly throughout the body and causes abnormalities to occur within the immune system and its responses. This, in turn, can lead to other diseases and immune abnormalities. It has been linked to many other diseases, and has infected over 75 million individuals. The virus targets CD4+T cells. It then spreads rapidly in the coming days, until the infection plateaus, and the immune system regains some type of control.[1] The virus is transmitted in many different ways, the most well known being sexual contact. Along with this, it can be transferred from mother to child or through needle exposure.[2]

HIV is a single-stranded RNA virus with a diploid genome. The virus inserts parts of its genome into the host DNA, altering the genome of the host and using the host to create viral proteins. It then uses these viral proteins to infect other host cells and the cycle restarts.[1]

If infected, constant treatment and medication can lower blood HIV levels. In fact, levels can get so low that the risk of sexual transmission is virtually zero.[3] Certain regions have higher infection numbers, including the whole continent of Africa, especially Southern and Eastern Africa.[4]

There is a small window of around 10 days after transmission of the virus where there is no viral RNA present in the body. The end of this phase is signified by a full body infection beginning in the draining lymph nodes. Cells that have already been infected travel to these nodes and come into contact with CD4+CCR5+T cells. The virus then infects these cells. Many immune cells, including macrophages, T cells, and others, are key points of infection, as they all express a certain receptor that is easily targeted by HIV viral cells. Once the virus has infected some cells, the spread is incredibly quick. Replication happens at an extremely fast rate. HIV spreads to any area of the body with high concentrations of CD4+CCR5+T cells, which includes lymphoid tissue present in the gut. A relatively small amount of cells in these tissues are actually infected. However, a large portion of cells that aren't infected are activated and go through programmed cell suicide, a process known as apoptosis. Because of this, a worryingly large portion of CD4+T cells become compromised within a very short frame of time, somewhere around 80%. Response from B cells are also interrupted during this phase of infection, though not because they are targets of infection. B cells are often matured in areas of the body such as lymph nodes and tissue, so the HIV infection in these places reduces B cell function and development.[5]

There is often a small period where a patient may show symptoms of an infection, around the same time that the virus becomes detectable in the blood. Symptoms are typically not severe, just a small fever. Some patients show no symptoms at all, and some show more serious symptoms. This is also around the same time that blood levels are at their peak, around 106 copies of viral RNA per 1 mL of blood plasma. Individuals with higher concentration of viral RNA will typically have stronger symptoms than individuals with a lower concentration. This level will decrease over the next few weeks, until a set point is reached. Much like the initial symptoms, a higher set point is often correlated with individuals with rapid health declines.[1]

HIV can be transmitted through a few different mechanisms. Sexual contact, needles (and blood), and mother-to-child relationships are all methods of transmission for HIV.[2]

The most common route of transmission is through sexual contact. Sexual contact does not include kissing or touching, but rather the exchange of body fluids like semen and vaginal secretions. Condoms have been shown to be a good preventer of this mode of transmission, though they are not 100% effective. Unprotected sex is a very high risk behavior. Having another STD also increases the risk of becoming infected with HIV.[6]

The sharing of needles with infected persons is another very high risk behavior, as the exchange of blood is a very easy way to become infected. The use of sterile needles and medical equipment is paramount, as it will eliminate this risk. Getting tested before receiving or giving blood is extremely important, as infected individuals may not know of their infection. If an individual is infected, blood should not be donated.[6]

The transmission from mother to child can happen throughout the entire pregnancy. It can also happen while breastfeeding and while giving birth. Again, getting tested is paramount when an individual is pregnant. Starting treatment as soon as a diagnosis occurs is extremely important for the health of a mother and infant. There are also medicines that can be taken during pregnancy to reduce the risk to the baby, known as PrEP. If handled correctly, these prevention methods can reduce the risk of transmission to <1%.[7]

HIV is fairly wide spread across the globe, but it has higher numbers in areas that share certain demographics. These demographics include gay men and transgender persons, sex workers, drug users using needles, and people confined in small areas, such as prisons.[1] The disease is extremely wide-spread throughout the middle and southern countries of Africa. Women are disproportionately affected in these regions, with around 57% of infected persons being women. South Africa has an estimated 7.5 million cases, making it the country with the most cases worldwide.[4]

HIV is an immunosuppressive disease. It causes severe damage to the immune system and body if not properly treated. Today, it is quite treatable and infected persons are often able to live long, healthy lives. Certain prevention methods can aid not only the infected persons, but the health of the public as well. The promotion of safe sex and healthy living habits, such as reduced intravenous drug usage and sharing of needles, will help to stop the spread of HIV. These prevention methods and education are especially important in key affected areas, like the many countries in Africa in which the prevalence of HIV is high.