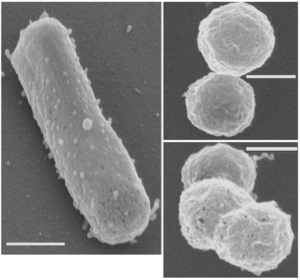 Halophilic extremophiles, or simply halophiles, are a group of microorganisms that can grow and often thrive in areas of high salt (NaCl) concentration. These hypersaline areas can range from the salinity equivalent to that of the ocean (~3-5%), up to ten times that, such as in the Dead Sea (31.5% average 3). Halophiles have been found belonging to each domain of life but primarily consist of archaea.14 They are metabolically diverse, ranging from simple fermenters to iron reducers and sulfide oxidizers.

Hypersaline environments are present on each continent and are primarily found in “arid and semi-arid regions.”17 Some are commonly known, like Utah’s Great Salt Lake, or the Dead Sea between Israel and Jordan. Others are less well known, such as Antarctica’s Deep Lake or Papua New Guinea’s undersea geothermal vents.6 19 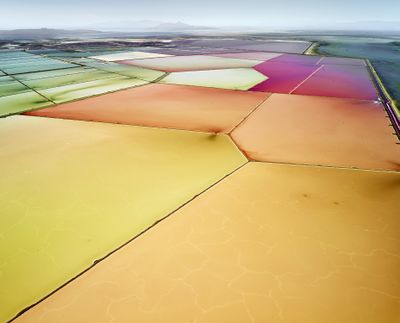 Anthropogenic hypersaline environments are commonly created by the salt industry. Salterns are large ponds that are filled with saltwater from the ocean or another source that are then evaporated away. In this process, the salinity of the water gradually increases as water evaporates until it reaches saturation (~26% at 20°C). The salt then precipitates out and is harvested. Halophiles take advantage of this environment and often their presence becomes visible due to pigments they produce.

Often in hypersaline environments, salts other than NaCl are also present. A salt profile for the Dead Sea is shown below. However, because halophiles are defined in relation to NaCl concentration, other salt content is not considered for halophilic classification.

Often in hypersaline environments, the salinity is just one extreme microbes must overcome. Hypersalinity often co-occurs with extreme temperature conditions, both hot and cold. Some hypersaline environments have been found that overlap with other extremes, such as low and high pH, and dry, desiccating conditions. Organisms in such conditions would be considered haloacidophiles, haloalkaliphiles, and haloxerophiles, respectively.

The majority of extreme halophiles are archaea 14. A thorough study of salt-crystallizing ponds from several places around the world by Oren in 2002 showed consistent communities between saltern ponds. The genera isolated were primarily Haloferax, Halogeometricum, Halococcus, Haloterrigena, Halorubrum, Haloarcula, Halobacterium, and Natronococcus. At lower degrees of salinity, diversity of genera present increases.

Bacteria belonging to the genus Salinibacter have been found to be “no less salt-dependent and salt-tolerant than the most halophilic among the Archaea…” 14 As such, within specific extreme environments, some bacteria “may coexist with the halophilic archaeal community .”14 As with archaea, bacterial diversity also increases as salinity decreases.

At the extreme end of hypersalinity, eukarya are absent. However, there are a few moderately or slightly halophilic eukaryotes that can contribute to the halophilic communities. There are also types of halophilic fungi, such as Debaryomyces hansenii and Hortaea werneckii .47

According to Oren in 2002, “The metabolic diversity of halophiles is great as well: they include oxygenic and anoxygenic phototrophs, aerobic heterotrophs, fermenters, denitrifiers, sulfate reducers, and methanogens.” Additionally, halophilic sulfide oxidizers, iron-reducers, and acetogens have also been discovered.202123 Halophilic bacteria have been found to perform fermentation, acetogenesis, sulfate reduction, phototrophy, and methanogenesis.13

One mechanism halophiles use to survive in high concentrations of salt is the synthesis of osmoprotectants, which are also known as compatible solutes. These work by balancing the internal osmotic pressure with the external osmotic pressure, making the two solutions isotonic, or close to it. Compatible solutes are small-molecular weight molecules. “Some are widespread in microorganisms, namely trehalose, glycine betaine and α-glutamate, while others are restricted to a few organisms.”16 The use of compatible solutes is the most common mechanism of salt resistance among halophiles.

A second, less common mechanism of defense against salt is through controlling potassium levels. This mechanism is performed by pumping in large amounts of K+ ions into the cytoplasm. To deal with the increased solute level, and to increase the solubility of the proteins within the cytoplasm, many proteins have evolved to become more acidic.16

A large number of research projects have been focused on finding and classifying novel halophiles.
A paper by Ndwigah in 2016 isolated a halophilic fungus, determining its optimal growth conditions and its metabolites.12
McDuff in 2016 characterized several CO-oxidizing halophiles. This paper also provided a novel species description of Haloferax namakaokahaiae.10
Amoozegar et al. provided a novel species description of a halophilic bacterium, Oceanobacillus halophilus. This bacterium was isolated from a brine lake in Iran.1

Because of the unique conditions to which the proteins of halophiles are subjected, their proteins are heavily studied, especially for their use in industry.
Varun in 2009 looked at the possibility of using a specific halophile to generate electricity. This species under its normal growth conditions fermented glycerol to ethanol, and produced electricity through iron reduction. According to the paper, “Glycerol is a major byproduct of biodiesel industry and therefore bacterial fermentation of this glycerol to ethanol would help to manage the waste as well as produce a value-added product.” This species could be potentially used in microbial fuel cells.21
A paper by Calegari-Santos in 2016 also looked at using halophiles in industry to produce carotenoids. These carotenoids have numerous “potential uses in Biotechnology and Biomedicine.”5

The ubiquity of viruses does not stop when the environment gets salty. Viral infection in hypersaline environments is also being actively investigated.
Atanasova in 2016 investigated how haloviruses and their hosts interact on an ecology level, and gave general lifestyle descriptions of numerous haloviruses. 2
Pietila in 2016 worked on the classification of haloviruses, proposing a new family for “archaeal pleomorphic viruses with single-stranded or double-stranded DNA genomes.”15

8. Hochstein, Lawrence I., and Frank Lang. "Purification and Properties of a Dissimilatory Nitrate Reductase from Haloferax Denitrificans." Archives of Biochemistry and Biophysics 288.2 (1991): 380-85. Elsevier. Web. 28 Mar. 2016.8

Edited by Dallas Dominguez, a student of Mary Beth Leigh at the University of Alaska Fairbanks. Template adapted from one used by Angela Kent University of Illinois at Urbana-Champaign.