Importance and Control of Bioluminescence

Luminescent bacteria can be found in different habitats and are widely distributed [1]. They are more commonly found in marine environments than in non-marine environments [3]. There are three major genera for luminous bacteria that have been well studied: Vibrio, Photobacterium, and Xenorhabdus [4]. Genus Xenorhabdus are terrestrial bacteria. Both genus Vibrio and Photobacterium are marine microorganisms that have a symbiotic relationship with certain marine species [5]. The majority of deep-sea fish are reported to be luminescent, however some luminescent bacteria only exist in a saprophytic or parasitic relationship with their host [5].

Many bioluminescent bacteria live within specialized tissues of certain marine animals such as, squid and fish [6]. Specific symbiotic relationship is between the luminescent bacteria, Vibrio fischeri and squid, prymna sclopes [3]. The luminescence of the bacteria residing in the mantle cavity of squid is possibly used as a defense mechanism against other organisms in the deep sea [3]. It is thought that the luminescence frightens and confuses organisms as an alternative for the squid releasing black ink [3]. The benefits of marine species co-existing with the luminance bacteria are attraction of prey, diversion of predators, and communication; however the advantages for bacteria are still currently not well known [5].

The function of luminescence includes: counter-illumination camouflage, mimicry, attracting mates, distraction, warning, illumination, and communication. The focus of this article is on the relationship between microorganisms and bioluminescence. Some species of bacteria use communication to up-regulate or down-regulate luminescence gene expression [7]. This communication can also be called quorum sensing, which is the communication between individual cells in a population. Luminescent bacteria produce and secrete small extracellular molecules, called autoinducers, to turn on gene expression for light production [7]. Autoinducers can diffuse freely in and out across the cell membrane [8]. This communication responds to the fluctuations in the cell population density [7]. 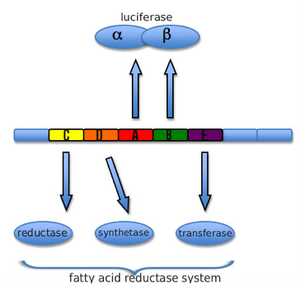 Lux operon controls the expression of the genes needed for bioluminescence [9]. The genome luxCDAB(F)E, which is common for all lux operons [4]. The genes luxA and luxB code α- and β- subunits of luciferase and the luxC (reductase), luxD (synthetase), and luxE (transferase) genes code the polypeptides of the fatty acid reductase system, which is responsible for synthesis of the fatty aldehyde substrate [5]. The lux operon has a role in the diversion of fatty acids from lipid metabolism into the bacterial bioluminescence reaction [5].

Luciferases are oxidative enzymes that catalyze the bioluminescence reaction in light-emitting organisms [5]. Bacterial luciferase are made up of two subunits, α and β. Cofactors calcium ions or ATP can mediate luciferase [5]. The luciferase-catalyzed reaction involves the oxidation of a long-chain aldehyde and FMNH2 and results in the emission of a blue-green light [5]. The conversion of the aldehyde to fatty acid provides most of the energy for the light emission [5]. The oxidation of the FMNH2 provides the remaining energy in the reaction [5].

Luciferin reacts with oxygen to create light. Luciferin consists of a long-chained aldehyde and as a reduced riboflavin phosphate (FMNH2) [5]. Long-chain aldehydes are essential for the luminescence reaction [5]. Nonanal and decanal and some unsaturated aldehydes give higher levels of light than tetradecanal; however tetradecanal appears to be the natural substrate for the reaction [5]. The bioluminescence reaction is highly specific for the reduced riboflavin phosphate (FMNH2) [5]. If the flavin ring is altered or the phosphate is removed, the activity of the reaction is significantly decreased [5]. Substitution of the phosphate with a carboxyl group or exogenous addition of high concentrations of phosphate or sulfate can sometimes partially restore activity [5]. The high concentrations of phosphate or sulfate act as autosteric effectors, which are molecules that bind to regulatory proteins changing the activity of them [5]. Lumazine are proteins involved in the biosynthesis of riboflavin. Lumazine accept the energy the luciferase primary excited state which results in excite chromophore that emits blue light [10].

Regulation and Expression of lux Genes

There are many factors that influence the intensity of light emission from luminescent marine bacteria [5]. These factors include the nutritional state of the cell, the oxygen and salt concentrations, the temperature, and the level of catabolites and cAMP [11]. Light emission per bacterial cell is still very low at early stages of cell growth, even with optimal conditions [3]. Changes in intensity also occur due to the availability of luciferase or the substrates needed for the reaction [5]. The consequence of autoinducers unable to accumulate in a concentrated area (ex. ocean or media) is repression of luminescence [5]. These bacteria in an open environment produce very low levels of light compared to bacteria in confined environment [5].

(8) Kaplan H.B., and Greenberg, E.P. "Diffusion of autoinsducers is involved in regulation of the Vibrio fischeri luminescence system." Journal of Bacteriology (1985): 1210-1214.