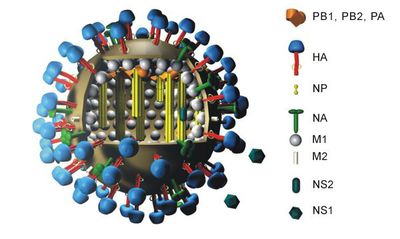 Influenza, also commonly known as the flu, is a contagious respiratory illness caused by various influenza viruses that infect the nose, throat, and lungs [8]. Although influenza is typically a mild and common illness, it causes 40,000 deaths and 100,000 hospitalizations annually in the U.S. Today, the seasonal influenza vaccine remains the most effective method to prevent the flu.

There are 3 types of viruses: A, B, and C. Type A and type B are the major pathogens in humans, which is why current influenza vaccines are trivalent, consisting of two influenza A subtypes (H1N1 and H3N2) and one or two variants of influenza B virus [5]. Each year, scientists choose three to four viral strains based on which strains are predicted to most commonly circulate in humans each winter flu season.

Once every year, many people receive either "inactivated" or "live, attenuated" flu vaccinations. While recent studies by the CDC show that these vaccines can reduce the risk of flu illness by approximately 50-60%, these seasonal vaccines only offer short-term and highly specific humoral immunity attributed to the frequent antigenic variations (mutations) in the influenza virion [1,8]. A solution to these issues is an universal vaccine that offers broad-spectrum immunity. One such conserved antigenic target is the hemagglutinin HA2 stalk domain. If a universal vaccine is successfully made, it will eliminate the need for yearly viral strain forecasting and it will protect against various influenza viruses at once.

Structure, function, and mechanism of hemagglutinin 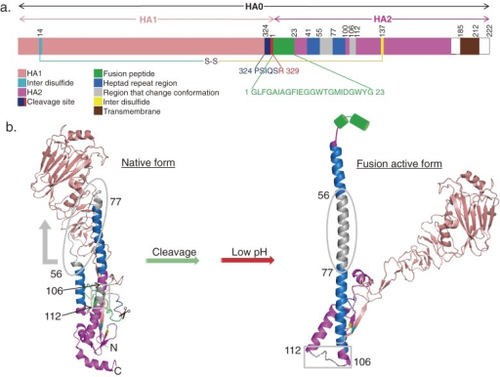 Conformational changes of influenza HA structure due to pH decrease. Upon acidic conditions, the HA glycoprotein changes from its native to fusion active form, exposing the fusion peptide (green), which is then inserted into the host endosomal membrane, leading to membrane fusion. By Sriwilaijaroen N, Suzuki Y published in 2010 10

Hemagglutinin (HA) is a glycoprotein on the surface of influenza viruses that causes red blood cells to clump in the presence of an antibody. There are at least 18 HA antigens, and its subtypes are named H1 through H18. They are approximately 13.5nm long and form a cylindrical shape. Hemagglutinin contains three identical monomers from an alpha helix coil, which hold the sialic acid binding sites. Each of these HA monomers has two components: HA2, a long helical chain, and HA1, a large globule head [3, 10].

HA1 and HA2 have different structures and functions but both ultimately help bind the virus to the host cell. HA1 holds the binding globular head domain and a conserved disulfide bond linking cysteine 52 and cysteine 277, which contribute to its stability [9]. HA1 also contains the sialic acid binding site, which binds the virus to the target cell's sialic acid receptor [7]. HA2 consists of the membrane-fusion inducing stalk domain that allows virus particles to enter. The N-terminus of HA2 holds the fusion peptide, which is hidden in the HA structure (green on the figure to the right). This region cannot interact with the hydrophobic environment until the pH of the cell decreases, causing the structure to slightly unfold and expose the fusion peptide [10]. This conformational change allows the virus to fuse to the cell, and the virus can now insert its genetic information into the cell.

Influenza hemagglutinin has two mechanisms of helping the virus bind to to the target cell. One way is the HA1 globular head domain binds the virus to the sialic acid receptor on the target site, causing the virus and cell to stick together. A second function is it catalyzes the entry of viral DNA into target cells by membrane fusion [4]. Once they bind, the virus can inject viral genetic information into the target cell and take over cell machinery.

Hemagglutinin constructs as a universal vaccine

Many current influenza vaccines target the head domain of hemagglutinin or have neutralizing antibodies that can replicate hemagglutinin functions. While these vaccines are effective at providing short-term immunity, they have some significant drawbacks [5, 6]. For the vaccines that target the head domain of HA1, one such drawback is the unpredictable mutations surrounding the head domain HA1 that cause these vaccines to have a low broad-spectrum efficacy. The head domain contains variable antigenic sites known as antigenic drift, small changes over time, or antigenic shift, abrupt and large changes. Antigenic drift is caused by frequent point mutations in HA and NA proteins in influenza virions due to lack of proof reading enzymes. The amino acid substitutions in these proteins makes the mutant virions go undetected by host antibodies. Antigenic shift occurs when the fragmented genomes of an influenza virus undergo genetic variations when rare gene exchange occurs between human and non-human (e.g. avian, equine) viral strains, creating a new genotype and novel HA and/or NA proteins.

Due to the frequent and unpredictable mutations caused by antigenic sites, universal influenza vaccines can offer more reliable and broad-spectrum immunity. Many universal influenza vaccine constructs focus on conserved regions of the HA protein [2, 6, 9]. HA2 has much less probability of antigenic variation compared to HA1 and it contains a specific region that is conserved among many viral strains [6]. The sequence conservation of HA2 (51-80%) is higher than that of HA1 subunit domain (34-59%) [2].

One way to construct a vaccine that stimulates an antibody response to a conserved region is by vaccination with headless HA constructs. This novel construct maintains the conserved influenza HA stalk domain (HA2) but lacks a majority of the globular head (HA1). The headless HA vaccine capitalizes on the conserved regions in HA in order to offer full protection from death and partial protection against disease following lethal viral challenge in mice [9]. These hemagglutinin constructs have been shown to be safe and successful in preventing infection with influenza A virus in healthy adults and mice [7, 9]. 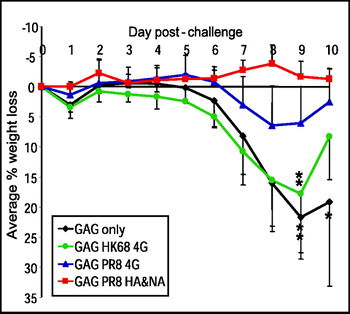 One example of a study that explores the potential of a hemagglutinin construct for a universal vaccine for influenza is vaccination with headless HA constructs by Steel et al. [9]. These researchers hypothesized that in conventional influenza vaccines, HA2 is masked by the highly immunogenic globular head domain HA1. They wanted to construct a vaccine that would create cross-reactive anti-HA2 antibodies to offer broad protection against various influenza strains. They wanted to remove the HA1 globular head that contains a vast amount of antigenic variation while also maintaining the integrity of the HA2 subunit, which is highly conserved. Thus, they constructed a truncated HA molecule that lacks a significant portion of HA1 but keeps the part of it that stabilizes the HA2 region. They did this by flanking the conserved disulfide bond linking cysteines 52 and 277 of HA1 and replacing this loop with a short linker peptide that would not disrupt the folding of the rest of the molecule. They made a panel of headless HA constructs, such as variations in the number of glycines flanking the loop. They found that constructs which retained the Cys 52 and Cys 277 and had the 2 glycine and 4 glycine linker peptides had the highest steady-state levels.

Then, they administered a three dose vaccine regimen to mice. On days 0 and 21, the mice received plasmid DNA. On day 56, VLPs (virus-like particles) were delivered which either had Gag proteins alone or with vectors encoding the full HA or headless HA. These Gag proteins were needed for virus assembly and for mature virus infection in the host cell. On day 77, all of the mice were challenged with a PR8 virus, a particular influenza type A virus. All of the mice with the headless HA construct survived and showed a very small percentage of average body weight loss (red and blue on figure to the right), meaning they were well-protected from the viral infection. In comparison, 3 out of 4 of the mice with the full-length HA (Gag only) died because of the significant body weight loss and the other mouse suffered a 15% body weight loss (black on figure). They also found that the headless HA, and not the full-length HA, induced antibodies which are cross-reactive among HA subtypes, showing that the headless HA constructs had greater broad spectrum immunity.

Current research on various hemagglutinin constructs show that the possibility of a universal vaccine is promising [1, 5, 6, 9]. By using the conserved region of the stalk domain, an influenza vaccine can be made that greatly eliminates the problem of antigenic variation, which requires a new influenza vaccine with a new strain to be administered each year. More insight to the possibility of a universal cross-protective influenza vaccine can be furthered by new tools of gene-based vaccination and monoclonal antibodies that can be used to conduct more research on the structure-based vaccine design and the development of vaccines that induce an immune response to the highly conserved structural domains shared among many viruses [6].

"Flu (Influenza)." National Institutes of Health. National Institute of Allergy and Infectious Diseases, 12 Dec. 2012. Web. 1 Apr. 2015.
This is a great source for further insight on influenza and the new approaches being used to create a universal vaccine. Published by the U.S. Department of Health and Human Services, there is a great deal of cutting edge data on new technologies and findings relating to influenza vaccines. All of the information is easily accessible and relatively easy to understand.

[10] Sriwilaijaroen, Nongluk, and Yasuo Suzuki. "Molecular Basis of the Structure and Function of H1 Hemagglutinin of Influenza Virus." Proceedings of the Japan Academy, Series B 88.6 (2012): 226-49. Print.

Edited by Gabriella Newman, a student of Nora Sullivan in BIOL168L (Microbiology) in The Keck Science Department of the Claremont Colleges Spring 2015.