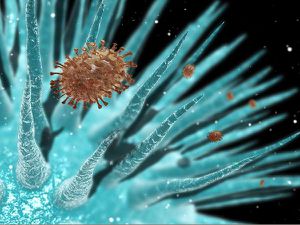 Figure 1. Electron micrograph of the Inflenza virus. This shows the virus (brown) invading cilia (blue) in the airway of a human lung. http://science.nationalgeographic.com/science/photos/influenza/

The influenza vaccine is a highly controversial vaccine, and has several unique qualities that make it an especially interesting topic of research.

Vaccines mimic natural infections and initiate an immune response, so the body can more efficiently and affectively fight off the virus when exposed to it (1). The active agent of a vaccine can come in several forms, including an intact, but inactivated form of the pathogen, or a component of the pathogen that is highly immunogenic but that cannot act on its own, such as the protein coat of a virus. Exposure to one of these altered forms of the pathogen leads to the production of antibodies for the antigens of that specific virus or bacterium (2). The next time the body is exposed to the pathogen, it will already contain antibodies that recognize the intruder's antigens and, ideally, will be able to fight against it much more quickly.

Each year's flu vaccine is a mixture, or cocktail, of vaccines containing antigens that represent several different strains (generally 3 or 4) of the virus that the World Health Organization scientists predict will spread during that year's flu season. The predictions generally match common strains closely enough that the vaccine is fairly effective, but this is not always the case. Sometimes, a year's most common strains are unexpected ones (2).

The influenza virus is a rapidly evolving pathogen, which further complicates the problem. The virus evolves enough from season to season that a new dose of a modified vaccine is necessary every year, as last year's antibodies usually can not recognize this year's strain(2). See antigenic drift section.

Surface glycoproteins hemagglutinin and neuraminidase are two antigens that are key players in the evolution of the influenza virus. The hemagglutinin protein helps the virus bind to and enter host cells, while the neuraminidase enzyme enables the virus to be released form the host cell as well as generate progeny viruses (3). Both proteins have specific sites that are recognized by the immune systems of the host, placing these sites under strong selection pressure. Mutations in genes effecting the production or expression of either of these proteins may allow the virus to evade attack by common antibodies. These virons are selected for by natural selection. The "fit" mutants spread to new people and new strains evolve. This process is known as antigenic drift, and the anitigens evolve (or "drift") quickly (4). 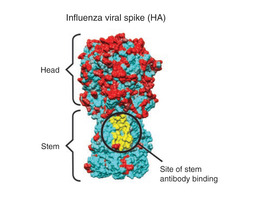 Mutations occur quite often in the virus. This is due to the lack of a proofreading mechanism for RNA polymerase in the virus. An example of one of these mutations relates to the location of carbohydrate chains on the surface of hemagglutinin (5). If a mutation leads to the virus having an additional carbohydrate where the antibody would normally bind, the antibody will no longer be effective (5).

Current vaccines produce antibodies that recognize hemagglutinin proteins on the outer coating of the virus, focusing on the "head" region of the molecule (see figure 3). But this "head" region is a part of the virus that is very susceptible to antigenic drift. Thus, if this part of virus mutates and spreads, which it does quite often, the vaccine no longer works effectively. Many scientists suspect that highly conserved molecules in the influenza virus could be used as targets for a new vaccine (6). Several researchers are currently focusing on this possibility. This vaccine would be universal, and would not need to be reformulated and re-administered every year. Possible targets include the hemagglutinin "stem", which is nearly identical across a wide range of strains (see figure 2), or the M2 viral membrane. A research group at NIAID's Vaccine Research Center was successful in creating a vaccine that elicits antibodies that target a specific region of the stem. They administered the experimental vaccine to animals, who were successfully protected from a vast array of strains (7). Whether this new target will become the key to a new, universal vaccine remains to be seen.

Effectiveness and side effects

The effectiveness of the influenza vaccine has been a controversial issue, making it a common topic of research. The Centers for Disease Control and Prevention strongly recommend that everyone over the age of 6 months receive the vaccine. (8)</sup>]. But how effective is it in preventing the flu?

Michael Osterholm, a University of Minnesota infectious disease expert, led a comprehensive research effort to evaluate the vaccine's effectiveness along with three other flu researchers. Osterholm et al. found that the vaccine is 59% effective overall in people 18-65 years of age (9).This means that, on average, 40% of people in this age range who get the vaccine receive no protection against influenza. This number varies year to year, as each year's common strains are hard to predict. Children and seniors are in the greatest need of protection from influenza. But these two groups may be the least likely to benefit from the vaccine. This decline in vaccine efficacy seen in the elderly is most likely due to a decreasing functionality of the immune system (10).

The most common adverse effects of the vaccine are minor. Nasal congestion, headache, and fever are a few examples. Younger children show an increased risk of wheezing (10). The risk of Guillain-Barré syndrome (GBS) after receiving the seasonal influenza vaccine is a concern for many considering getting vaccinated. GBS is a disorder affecting the peripheral nervous system that can lead to life-threatening complications. Some studies have found an association between the vaccine and GBS, and estimate the risk at approximately 1-2 cases per 1 million vaccines (10). One such study, headed by Dr. Jeffrey C Kwong, found that there is a small risk of developing GBS after vaccination, but the risk of developing GBS after having the influenza illness is much greater (11).

The influenza vaccine is widely accepted and very common. But there are several points of discussion and several research initiatives concerning the vaccine that continue to this day. The effectiveness of the vaccine is one such topic, as is the possibility of creating a universal vaccine. Its possible relation to disorders such as Guillain-Barré Syndrome is another area of interest.

Though there are several debates regarding the vaccine, most would agree that there is room for improvement. The idea that the current vaccine is "good enough" may actually be preventing the development of an improved vaccine. People may be unwilling to devote money and/or manpower to working on a more effective or universal vaccine when the current one appears to do the job well enough.