The name Kakabekia references the region in Ontario where the microfossil relative Kakabekia umbellata was first discovered. The name barghoorniana refers to the scientist, Barghoorn, who discovered the microfossil. Kakabekia is not well differentiated phylogenetically, but it is believed to be the modern descendent of one of the first Eukaryotes in the Plant kingdom.

Kakabekia barghoorniana was first described by Sanford Siegel in 1966 (it was first seen in culture in 1964) as a living organism that appeared nearly identical to a microfossil that had been discovered in Ontario which had been thought to have no relationship to any currently living species by a Harvard paleontologist Elso Barghoorn. The fossil was found in the gunflint range chert deposits that date back to the middle Precambrian period in what would have likely been shallow lakes. K. barghoorniana was first found in a high ammonium soil sample from Wales and was subsequently isolated from high ammonium environments in Alaska. Subsequently, Kakabekia was isolated from soil samples near the edge of a glacier in Iceland; the species is at least cold-tolerant. The soil from which Kakabekia was cultured was high in content of carbon, hydrogen, and organic nitrogen with low levels of sodium, potassium, and titanium. Kakabekia can be grown in glucose free media but growth is slowed significantly. Even with other nitrogen sources, Kakabekia cannot be grown without ammonia. 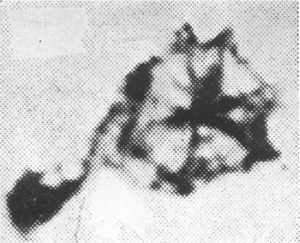 K. barghoorniana is a umbellate microbe that is not fully classified. The structure was initially described without distinct nuclei, however subsequent research revealed that the microbe is actually a eukaryote of the kingdom plantae. Structurally, the organism has a mantle with multiple rays that forms the top of the "umbrella" with a slender stalk leading to a sphrerical bulb. The organism is oxygen indifferent, with few heme enzymes and no phenol oxidases. Furthermore, the species has absolutely no ability to store lipid or polysaccharide. Kakabekia appears to preferentially utilize glucose as a carbon and energy source but it has the ability to function without; likely through photosynthetic machinery.

K. barghoorniana was discovered during research attempting to isolate organisms that could survive in high ammonia environments. This is of particular interest to astro-biology; for example multiple gas giant/moons have atmospheres with very high ammonium content. Kakabekia is also a living relative of a Precambrian microfossil and provides a model organism that would have survived and flourished in the primative, reducing environment of the Precambrian era.

Kakabekia barghoorniana was discovered in 1960s, when molecular biology has just established. Methods to determine genome structure, such as sequence-based modeling and threading, were not well developed at that time. Therefore, the editors have not found any information about the genome structure of this microorganism. 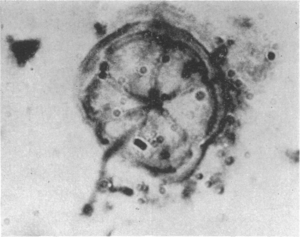 Kakabekia Barghoorn was described by Barghoorn and Tyler, its discoverers, as "spheroidal bulb, slender stipe and crown or mantle of umbrella-like shape" (Fig. 1). Stipe lengths and the diameter of the umbrella ranged from 12 to 30 µm and from 5 to 30 µm, respectively. The type species Kakabekia umbellata Barghoorn had noticeable general characters, while the difference in dissected mantle perimeter may be a possible specific character. In 1964, an umbellate form with 5 µm in diameter and an enlarged stipe was observed in a culture from a Welsh soil sample, which had been cultured under experimental atmospheres containing ammonia (Fig. 2). This discovery was later confirmed by Barghoorn and Tyler, reporting the similarities between their picture and the newly found one, which leaded to evident cultured form. In 1969, soil samples from Alaska were found to yield Kakabekia when cultured in an ammonia-glucose medium, which gave the researchers an opportunity to compare these three known Kakabekia populations with some cytochemical features (Fig. 3). 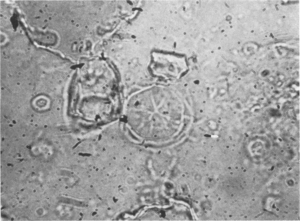 The culture of living Kakabekia requires no oxygen. However, unlike well-known anaerobes like Clostridia, they are not inhibited in air. Cytochemical tests for O2-utilizing oxidases and peroxidases were conducted to study the irrelevance to the presence of oxygen as an original characteristic (Table 1). These tests showed that phenol oxidases were completely absent, while heme enzymes were absent in most but not all members of test populations, suggesting that Kakabekia barghoorniana populations are in the transition from a more primitive to a more advanced condition with respect to O2-utilizing mechanisms. In contrast, the same population was uniformly negative with respect to polysaccharide and lipid storage and positive in dehydrogenase activity.

Table 1. Oxidase activity and other cytochemical tests on Alaskan specimens of K. barghoorniana.

Unfortunately, the editors have not found any studies about the life cycle of this microorganism.

The ecologic makeup of the community the modern species Kakabekia barghoorniana occupies is not fully elucidated in the research. Given the unusual conditions, the lack of mention of other organisms could simply represent the inability to grow and/or identify other members of the community; also the research was not directed at identifying the entire ecological niche, more with defining the growth of a relative of a primordial species. In the precambrian era, Kakabekia lived in stromatolite communities consisting of blue-green algae, multiple bacterial species, and the partially characterized Eosophaera another primitive eukaryote. Ancient Kakabekia lived with what were most likely iron-oxidizing bacteria in the benthic regions of the sea floor of ferruginous oceans in a very high iron, anoxic environment. This likely correlates to the oxygen-indifference of modern Kakabekia. The modern Kakabekia lives in a fairly similar environment, thought the community surrounding it is not well described it likely bears some resemblence to that of it's precambrian ancestor.

S. M. Siegel and C. Giumarro. "On the Culture of a Microorganism Similar to the Precambrian Microfossil Kakabekia Umbellata Barghoorn in NH3-Rich Atmospheres." Proceedings of the National Academy of Sciences. 1966. Vol. 55, p. 349-353.