A Microbial Biorealm page on the genus Klebsiella 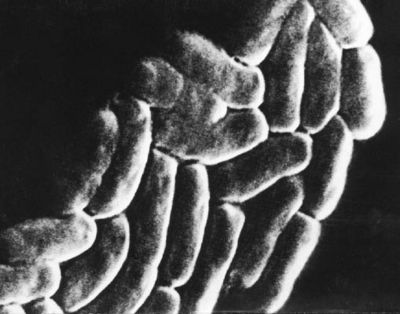 Klebsiella pneumoniae is one of the most common Gram-negative bacteria seen by physicians worldwide. Pneumonias that are caused by Klebsiella pneumoniae are difficult to control; mortality rates have even been reported as up to 50% after antibiotic treatment (Straus 1986). Nitrogen metabolism in Klebsiella aerogenes has also been studied throroughly (Senior 1975).

Klebsiella are non-motile, rod-shaped, proteobacteria that possess a prominent polysaccharide capsule. They are facultative aerobes, capable of both fermentation and aerobic respiration. Some of these bacteria produce an extracellular toxic complex that has been shown to be "lethal for and produce extensive lung pathology in mice" (Straus 1986). It is composed of 63% capsular polysaccharide, 30% lipopolysaccharide, and 7% protein; when introduced to experimental animals in sublethal doses, the animals built up immunization due to antibody production (Straus 1986).

Klebsiella are ubiquitous and may colonize the skin, pharynx, or gastrointestinal tract in humans. They form large moist colonies due to "large mucoid polysaccharide capsule (K antigen) that protects from phagocytosis and aids in adherence" (U of Maryland).

K. aerogenes, like other microorganisms, uses L-glutanime as the key metabolite in nitrogen metabolism. The amide nitrogen of glutamine is important in the biosynthesis of asparagine, glucosamine 6-phosphate, tryptophan, histidine, carbamyl phosphate, p-aminobenzoate, adenosine, 5'-monophosphate, cytosine 5'-triphosphate, guanosine 5'-monophosphate, glutamate, and other amino acids. The alpha-amino group of glutamine is also transferred to an alpha-keto acid in transamination reactions. All these reactions allow the biosynthesis for the assimilation of NH3 into all amino acids (Senior 1975).

In an evironment with a high concentration of ammonia and/or organic nitrogen, however, this nitrogen fixation would not be needed. In K. aerogenes, a low concentration of ammonia and/or organic nitrogen causes the repression of the glutamate dehydrogenase and the induction of glutamate synthase, an alternative supplier of glutamate within the cell; this differs from E. coli in which glutamate dehydrogenase is progressively induced during nitrogen limitation.