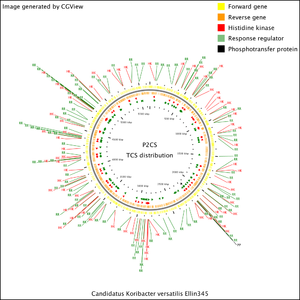 First isolated from soil in ryegrass/clover pasture in Australia in 2003 by a group of scientists led by S.J. Joseph. After the strain was isolated, it was informally given the candidate Latin binomial "Candidatus Koribacter versatilis" Ellin345. It is only distantly related to other organisms in the domain Bacteria. Although the organism has been isolated, it does not grow on standard media. Its growth is very slow, and it requires several days to weeks to form visible colonies on complex, low-nutrient media. The difficulties culturing Koribacter have confounded the ability to determine its metabolic and physiological traits. Its cells are very small (0.5um by 1.0um), Gram-negative rods. Koribacter also contains flagella for motility.

Koribacter is studied primarily for its role as an acidophile and its contribution to the global carbon cycle. Its closest known phylogenetic relative is Candidatus Solibacter usitatus, which was also isolated from soil in a rygrass/clover pasture in Australia. Growth temperatures are between 4C and 37C. It is widely distributed in soils, and it may sometimes make up to 14% of soil bacterial communities in some samples. Koribacter is capable of oxidation of CO and degradation of complex plant polymers. It has been speculated that this degradation property and CO oxidation arose as scavenging strategies to optimize life in a low-carbon environment. It has been estimated that CO-oxidizing bacteria remove approximately 20% of the total-global CO input to the atmosphere. It is then plausible that acidobacteria,including Koribacter, make a quantitatively significant contribution to two major parts of the carbon cycle: degradation of complex polymers and CO oxidation.

Genomic evidence also suggests that Koribacter plays a role in the global nitrogen cycle by the reduction of nitrate, nitrite, and possible nitric oxide. There is also evidence that it plays a important role in iron redox reactions, as Koribacter has been detected in and sometimes found to dominate 16s rRNA gene sequence libraries from iron-rich mine environments. The ability to scavenge iron is critical for Koribacter's survival in soils.

The complete genome sequence is located in the GenBank database under the accession number CP000360. It has a circular chromosome, contains 5,650,368 nucleotides, 4,777 protein genes, and 55 RNA genes. The genome contains full complements of flagellar and chemotaxis genes. It contains candidate cellulases as well as beta-glucosidases, suggesting that it is able to degrade cellulose substrates. Koribacter's genome encodes a candidate alpha-glucuronidase from family GH67 (plant cell wall hemicellulose degradation) that appears to share the highest sequence similarity with fungal homologs. This evidence for an ancestral horizontal gene transfer event has not been reported for members of any other glycoside hydrolase family.

Its genome contains traits conferring carbohydrate-based storage mechanisms (glycogen) and compatible solutes (trehalose). Its sequenced genome contains candidate genes in the AR3 system that may suggest a mechanism for tolerance of acidic conditions. However, no evidence of adaptation to acidic conditions by comparison of individual amino acid frequencies have been found.

Koribacter is heterotrophic and may degrade a variety of sugars, amino acids, alcohols, and metabolic intermediates. It also encodes the ability to use complex substrates such as xylan, hemicelluloses, pectin, starch, and chitin. Polymeric carbon forms have been successful substrates for cultivating Koribacter from soils, possibly because they allow the acidobacteria to outcompete other bacterial species unable to use these complex substrates at low concentrations. Koribacter is acidophilic and able to brow between pH 3.0 and 7.5; optimum is below pH 6.0. It is capable of hemicellulose side chain degradation. Genome traits conferring carbohydrate-based carbon storage mechanisms (glycogen) and compatible solutes (trehalose) suggest a potential role for carbohydrates in nutritional pathways, as well as in desiccation resistance.

The Koribacter genome contains genes predicted to encode carbon monoxide dehydrogenase. Given the absence of ribulose-1,5-bisphosphate carboxylase/oxygenase or other enzymes predicted to be involved in autotrophic carbon fixation, it is likely that Koribacter supplements its primarily heterotrophic energy budget with CO.

[1] Ward, Naomi L., et al. "Three genomes from the phylum Acidobacteria provide insight into the lifestyles of these microorganisms in soils." Applied and environmental microbiology 75.7 (2009): 2046-2056.