A Microbial Biorealm page on the genus Legionella nagasakiensis 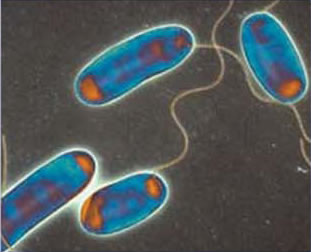 L. nagasakiensis is very similar to other species of Legionella, but differs due to a variety of novel proteins and other molecules not seen in the other 52 species. It is a gram negative bacillus although depending on conditions it can appear to be slightly coccoid as well. Also, like the other species of Legionella, it causes Legionnaires disease. There are several strains of nagasakiensis found through the world, two strains were found in Australian drinking water, one in a U.S Legionnaires patient, and the initial strain was found at the Nagasaki Municipal Medical Center, Japan thus its name [1].

While nagasakiensis has not had its entire genome processed it has had sections analyzed to determine its phylogenetic placement among species of Legionella. Nagasakiensis’ genome shares only a 29% genomic similarity to its closest sister species- Legionella oakridgensis making it a novel species. Other strains of Legionella only shared roughly a 10% similarity [1]. However nagasakiensis is not so dissimilar that it belongs to another genus; its 16S rDNA gene sequence, which is 1,496bp long, shares an 96.6% relatedness to its sister species [2]. This makes it different enough to be its own species.

L. nagasakiensis is largely found in fresh water. Two sites where L. nagasakiensis has been found is in southern Australia and in well water from Nagasaki Medical Hospital. L. nagasakiensis is often found alongside the more well known L. pneumophila in cases of Legionnaires disease. The bacterium thrives in warmer water around 36oC [2] but also does well in soil. In a lab setting it can be cultivated on a buffered charcoal yeast extract (BYCE) agar that has been specially treated with acid at 35oC [1]. As a result of its preferred habitat L. nagasakiensis is able to adapt very easily to mammalian conditions. It often finds its way into the lungs as a result of being an airborne pathogen. L. nagasakiensis produces a unique autoinducer called Legionella autoinducer-1 which is singnaling molecule responsible for the organisms quorum sensing. Quorum sensing is the ability to determine the surrounding population density of members of the same species and adjust the individual’s physiology to match the conditions.

The major virulence factor of most forms of Legionella is macrophage infectivity potentiator protein which allows the bacteria to infect amoebas or human macrophages [4]. It naturally infects specific amoebas and develops inside of it using it for nutrients. When inhaled, Legionella mistakes macrophages found inside a person as being the amoeba and infects them. Nagasakiensis is no different than its relatives; it is often found with other virulent strains in patients with Legionnaires [3]. It is an airborne pathogen that ends up in the lungs after being inhaled and causes pneumonia and other symptoms related to hypoxia (the body is deprived of oxygen). Legionnaires' Disease is a condition that is caused by a strain of Legionella infecting the alveolar sacs of the lungs. Legionella also causes Pontiac Fever which occurs when Legionella infected amoeba are inhaled and cause a much milder infection than Legionnaires'.