Lichen are formed by symbiotic association between fungi and algae. Lichens can also be the symbiotic association between fungi and cyanobacteria.The fungal partner in the lichen association is the "mycobiont", and cyanobacterial (or algal) partner is the "photobiont".Lichens are unique organisms that can be found in different and contrasting environments. For example, lichens are found growing in Antarctic Tundra as well as in African Sahara desert [4][5].Lichens are morphologically diverse and some of them resemble plants and fungal fruiting body. Lichens grow at a very slow pace (a few millimeters a year [8]) and take a lot of time to establish on the substrate (example, trees or rocks). Lichen structures growing on forest trees and the lichens surviving on rocks can be very old, some times even million years old. For example, in recent years, researchers have identified lichen as old as 600 million years through analysis of fossil and phylogenetic data [2]. Lichens play a significant ecological role as the primary colonizers of barren earth and rock, and make the environment favorable for growth where other organisms can start establishing themselves [1].In addition, some species of lichens inhabiting forests are important in providing food and shelter for birds and animals [3]. Further, lichens are being used as ecological indicators of pollution as they are very sensitive to changes in the environment. 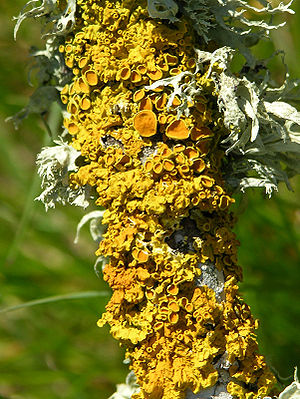 Lichens are classified to three major groups based on their thallus structure. They are crustose lichens,foliose lichens and fruticose lichens [6]. 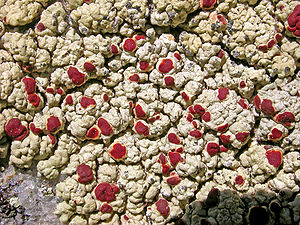 Thallus of 'Leprose' lichen is powdery in appearance.This form of lichen is so thin that it is very difficult to differentiate the photobiont and mycobiont as separate layers.Example, Genus Lepraria

'Scale-like' Crustose lichen which appears as partially separated from its substrate.Example, Genus Catapyrenium . 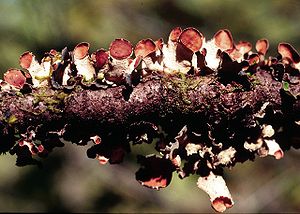 Foliose lichens appear like leaves. They grow on their substrates loosly and can be easily dismantled without damaging the substrates [23].Example, Lobaria oregana and Nephroma arcticum [3] . 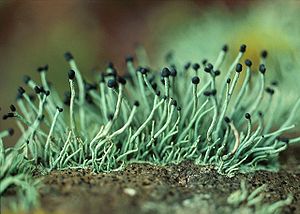 Ascomycetes and basidiomycetes are the main 'lichenized' fungal groups and majority of these(more than 95%) belong to Ascomycetes fungi [9]. Photobiont partners in the lichen association comes from 40 genera of cyanabacteria and algae when combined together [9].

Symbiotic association between the fungus and cyanobacteria(or algae) is a complex one. Fungal partner is responsible for the main structural framework of the lichen which is the 'thallus'.The photobiont stays inside the thallus and the mycobiont facilitates the gas exchange and light availability for the photobiont [10].Photobiont cells carry out photosynthesis and provide nutrients for mycobiont. The fungal partner in turn helps the photobiont with improved water and nutrient uptake and also helps to survive under extremely unfavorable environmental conditions as a unit.

Most of the lichens do not have the mechanisms to absorb nutrients from soil and they depend on atmospheric sources for nutrition. Precipitation, fog ,dew and gaseous absorption plays an important role in atmospheric nutrition of lichens [11].Lichens growing on rock and soil surfaces are capable of entrapping soluble nutrients form the respective sources. Lichen has also been studied widely to address the relationship between the symbiosis and nutrient uptake.In a study, using nitrate as the nutrient source, researchers reported that at a critical level or less than the critical level of nitrate concentration, both photobiont and mycobiont shows similar rate of growth in Peltigera praetextata (Flk.) Vain [12].

Lichens carry out both sexual and asexual reproduction. Fragmentation is the most common method of lichen asexual reproduction[15].In fragmentation, a section of parent symbiont can develop in to a new lichen.Soredium and isidium are the two types of vegetative reproductive structures of lichens. Isidium grows out of the thallus and contains both photobiont and mycobiont cells covered by the cortical layer of thallus [13]. Soredium is the other vegetative structure of lichens capable of 'independent growth'. Soredium also has photobiont cells covered by mycobiont structures but, it is morphologically different from isidium [14]. Isidium can be simple,branched cylindrical and scale like while soredium, most often has a powdery appearance.

Lichens on rocks and glaciers

Lichens play a major role in the primary succession to develop a new community in a new habitat.They can initiate growth on rocks,volcanic rocks and glaciers and help to establish a diverse community in those habitats.Lichens growing on rocks (saxicolous lichens) can grow on top of rocks (epilithic) also inside the rock (endolithic)[16].They can cause both biophysical and biochemical weathering effects to rocks [17].Epilithic and endolithic lichens can physically weaken the rocks by drying and re hydration.Lichen species growing on rocks also produce chemicals such as depsides and depsidons and can weaken the rock by forming metallic complexes[24].In addition, carbonic acid, one of the metabolic products of lichens, is a stronger acid compared to depsides and depsidons, can cause faster weathering especially on rocks containing calcium carbonates [24]. In general,weathering is the preliminary step in soil formation, in this case initiated by lichens. In primary succession, other organisms grow on humus produced by dead lichen parts and when those organisms die they create a better fertile area on rocks where other species of plants start establishing themselves.Eventually, after decades (or even after centuries), weathering by lichen and subsequent succession by other organisms contribute to soil formation.Further, lichens found on Hawaiian volcanic rocks have been reported to produce deep weathering crusts on basaltic lava [17].Lichen species growing on Arctic alpine glaciers are used as indicators of glacial retreats to warn against global warming [18].

Lichens are very much sensitive to air pollution and has been used as an indicator of air pollution.Fruticose lichen is the most vulnerable lichen type and crustose type is the least vulnerable lichen type to air pollution, while foliose has intermediate vulnerability to air pollution [19].Generally, some of the most susceptible lichen groups to air pollution are Ramalina, Lobaria and Usnea[20] . In a recent study, researchers indicated that lichen growth declined as a response to increase in sulfur dioxide and nitrogen content in the air [21].Presence of a lichen in abundance in an environment which usually does not grow well in that particular environment is regarded as one of the tools to assess the air pollution. For example, Lecanora conizaeoides has been found on trees in sulfur-compound-polluted parts of Sweden which is otherwise free of this lichen [22].

As a part of this project researchers are investigating the urban lichen diversity, evolution and speciation of mycobiont and phycobiont partners,and localisation and mineralization of elements [25].

Lichens can produce antibiotics like some of the actinomycetes. Usnic acid, stictic acid , vulpinic acid, etc are some of the lichen products and have been proven to have antimicrobial effects and are currently tested as potential antimicrobial products for their range of microbial growth suppression [27].

[6] Ahmadjian, V. 1993. Definition of lichen. In The lichen symbiosis (introduction).

[9] Oregon State University and the Northwest Alliance for Computational Science and Engineering (NACSE)(November 23,1998). Lichens are fungi.

[12] Scott,G.D.(1959). The relationship between nutrition and moisture content in the maintenance of the symbiotic state. Studies of the lichen symbiosis , 374-381.

[20] U.S. Department of the Interior and U.S.Department of Agriculture.(June, 2003).Air pollution-related lichen monitoring in National parks, forests and refuges: guidelines for studies intended for regulatory and management purposes..