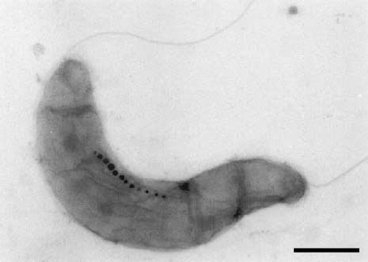 Magnetospirillum gryphiswaldense is microaerophilic, gram-negative, spirilla-shaped bacteria that lives in freshwater aquatic environments with vertical chemical gradients (Fig. 1) [1,6]. M. gryphiswaldense is known for its classification as a magnetoactive bacteria (MTB), which denotes its ability to biomineralize magnetic nanoparticles within its body [1]. These nanomagnets are synthesized and stored within organelles called magnetosomes [1,5]. The magnetosomes are aligned within the cell to create a microbial ‘compass needle’, which interacts with the Earth’s magnetic field [1]. M. gryphiswaldense motility, powered by two rotating flagella at either end of the cell, is then directed by the interactions between its magnetosomes and the geomagnetic field [1,6]

The first species of Magnetospirillum were discovered independently by two different scientists: Salvatore Bellini in 1963 and Richard Blakemore in 1975 [1]. In Pavia, Italy, Bellini noted a specific microbe that was continually migrating to one side of all the lake water samples that he analyzed [1]. A few years later in Massachusetts, USA, Blakemore observed the same behavior in microbes isolated from marsh mud samples [1]. Blakemore realized that the presence of a magnet caused the migrating microbes to alter their trajectory, and he named this behavior ‘magnetotaxis’ [1].


Since 1975, many magnetotactic bacteria have been discovered. The specific species M. gryphiswaldense was first isolated from sediments in the Ryck River in 1990 by biologist Dirk Schuler, from the Max Planck Institute of Marine Microbiology, and Dr. M. Kohler, a professor at the University of Greifswald in Germany [7,12]. Since the initial discovery of M. gryphiswaldense, extensive lab work and research has been focused on the M. gryphiswaldense strain MRS-1, which has served as an exemplary Magnetospirillum line due to its high-density cell growth [2].

The complete genome of M. gryphiswaldense was first sequenced in 2014 by Wang X. et. al. using Illumina Solexa and Roche 454 reads [9]. This initial read identified a single circular chromosome with 4,261 coding sequences [9]. A more accurate genome sequencing was performed in 2018 by René Uebe et. al., which again identified a single circular contig consisting of 4,155,740 bp with a G+C content of 63.3% [4,9]. The M. gryphiswaldense genome consists of 3,980 genes, and also contains 88 transposons. This high number of transposons explains why the M. gryphiswaldense genome is so highly flexible and could account for the differences seen between the 2014 and 2018 genome reads [9].

The ‘Magnetosome Island’ (MAI) is a region of the M. gryphiswaldense genome that is of particular interest because it contains all the genes necessary for magnetosome formation, magnetite crystal growth, and magnetotaxis [1,11]. The genomic region is about 130 kb in size and contains three important classes of genes:

All of these MAI genes are controlled by 4 main operons: mamAB, mamGFDC, mms6, and mamXY [1]. Deletion experiments preformed on the M. gryphiswaldense strain MRS-1 suggest that the only genes that are essential for nanomagnet synthesis are those controlled by the mamAB operon [1]. These mamAB-controlled genes contribute to formation of the magnetosome membrane, formation of the magnetite crystal, maturation of the magnetite crystal, and alignment of the magnetosome chain [1]. A study by Wang Q. et. al. revealed the MAI also contains 80 differentially expressed genes (DEGs) (53 upregulated and 27 downregulated), which vary in response to iron concentrations [11].

There are multiple theories for the evolution of magnetoactive bacteria based on their genetic makeup. Some say that the high conservation of the mam genes suggests a monophyletic origin, where all MTBs shared one common ancestor [1]. However, the rich diversity seen among MTBs could suggest that their evolution stemmed from multiple different lineages, and that the conservation of specific genes was due to a large amount of horizontal gene transfer, rather than a single common ancestor [1]. 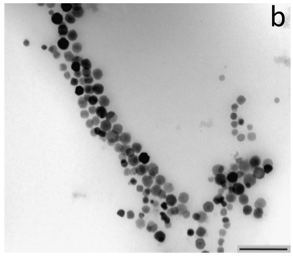 Figure 2: Magnetosomes Isolated from Magnetospirillum gryphiswaldense [5]. Within each magnetsome is a cuboctahedral magnetite nanomagnet, only 40-45 nm in diameter [11]. Magnetsomes will form linear or ring conformations even after being isolated from a cell [5].

As previously mentioned, M. gryphiswaldense are spirilla, or helically shaped, single-celled microbes with rotating flagella at either end of their bodies [1,6]. Their cell walls are gram-negative, meaning that they lack a thick peptidoglycan layer [5]. M. gryphiswaldense are usually several micrometers long and have a diameter of about half a micrometer [13]. The magnetic moment of M. gryphiswaldense as measured by light scattering was found to be 2.53± 1.6×10^16〖Am〗^2 [1].


While there is not much literature on the reproduction of M. gryphiswaldense research has shown that the turn-around time from initial reproduction to a fully-functioning organism (producing nanomagnets) is about 24 hours under ideal conditions (iron and oxygen conditions) [2].

M. gryphiswaldense synthesizes nanomagnets made of an iron oxide know as magnetite (Fe3O4), which is the most magnetic naturally occurring mineral on earth [1]. The magnetite nanomagnets are formed through the process of biologically controlled mineralization (BCM), where M. gryphiswaldense creates an organic mold, pulls in iron ions from the environment, and then oxidizes those ions so that they crystalize as magnetite [1]. The nanomagnets themselves are cuboctahedral in shape, and about 40-45 nm in diameter [11]. 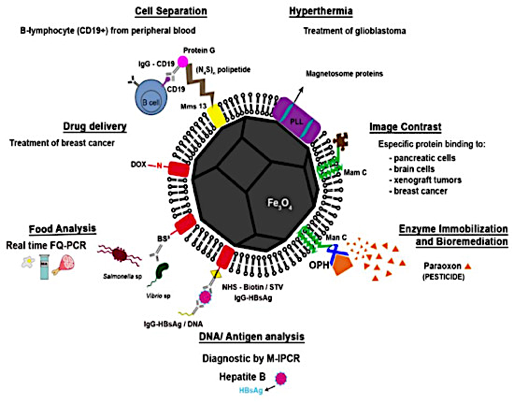 Figure 3: Applications of Magnetosomes [10]. The properties of the magnetosome membrane allow for the relatively simple attachment of many different molecules, equipping the magnetosome for numerous specific tasks. [10]

M. gryphiswaldense is potentially a highly lucrative microbe in terms of biotechnology applications because it synthesizes strong nanomagnets with high precision; synthetic nanomagnet production is not nearly as precise or dependable [3]. Magnetosomes can serve a wide range of purposes because they are very small but can still be easily separated from mixtures via magnets [3]. Additionally, the surface properties of the magnetosome membrane make it relatively simple to attach specific molecules to the magnetosome surface (Fig. 3) [10]. Some specific applications for both entire MTBs (including M. gryphiswaldense) and magnetosomes alone are listed below [10].