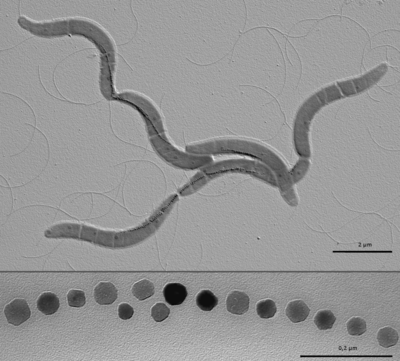 Magnetotactic bacteria (MB) are gram-negative bacteria that build specialized organelles called magnetosomes to store magnetic material. These magnetosomes are composed of a lipid membrane and crystalline magnetic mineral in the form of magnetite (Fe3O4) or greigite (Fe3S4). Magnetotactic bacteria are a very interesting research topic because they have the potential to impact a large number of scientific and applied disciplines. Magnetosomes are the perfect model for the study of cellular compartmentalization and organization in bacteria because the formation of specialized, membrane bound, features is usually attributed to eukaryotic organisms. Magnetotactic bacteria are also a great model for the study of biomineralization because of the precise control over the composition, size and morphology of magenetite crystals in magnetosomes. 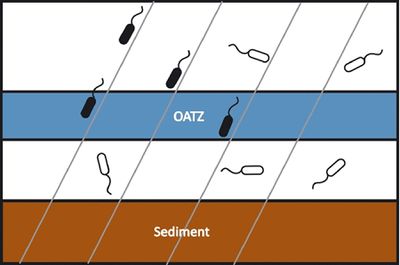 Figure 2 - Model of magneto-aeotaxis. Magnetotactic bacteria (black) use the earth's magnetic field (gray lines) as guides to localize to the OATZ while other organisms (white) must rely on other methods for finding the same region. Courtesy of Komeili (http://femsre.oxfordjournals.org/content/36/1/232.figures-only)

Magnetotactic bacteria were first described in 1975 when Richard Blakemore realized that a specific group of bacteria collected from sediment constantly swam in the same geographic direction, regardless of the positioning of the microscope or external stimuli.[1] MB are mostly found in shallow aquatic environments where oxygen and other redox compounds are horizontally stratified. Many described magnetotactic bacteria localize at or close to the oxic anoxic transition zone (OATZ)—a region in the water column that has very low oxygen levels. [2] The current model (shown in Figure 2) to explain the selective advantage provided by magnetosomes is that magnetotactic bacteria are able to locate the OATZ much easier than bacteria that solely use chemotactic and aerotactic mechanisms. [3] Although the magneto-aerotaxis model has been widely accepted amongst the scientific community, new research is suggesting that the behavior magnetotactic bacteria exhibit in the environment may be more complicated than a simple response to oxygen levels:

Due to their unique characteristics, magnetotactic bacteria have impacted a number of scientific and applied disciplines. Many researchers are interested in the process of magnetosome formation because it may offer clues to the processes involved in the formation of specialized compartments in bacteria. The uniform size and shape, purity and production of the magnetic crystals in MB also make them an attractive choice for bioremediation and biomedical applications.

Conventional methods of remediation such as chemical precipitation, ion exchange, and active carbon adsorption have been used to clean up contaminated sites, but these methods are commonly associated with high costs, low efficiency, and problems with secondary pollution. In recent years, a lot of bioremediation research has focused on biosorbents because of their low cost, high availability, and great adsorption properties. One of the greatest challenges with using Biosorbents in bioremediation is that they are notoriously difficult to recover in the field. Magnetotactic bacteria, however, are very promising because they can easily be separated from wastewater due to their magnetic properties. Most research on MB focus on iron, but several reports have suggested that metals such as manganese, cobalt, and copper may also be introduced into the magnetosome under the right conditions. Although magnetotactic bacteria are promising tools for bioremediation, bioremediation is a very knowledge-intensive process and strategies often differ from site to site. Aside from individual site analysis, there is still a lot of research that needs to be done to better understand to underlying processes involved in the biomineralization and biosorption in magnetotactic bacteria and increase efficiency of remediation.

Bacterial genomes can evolve over time due to mutations, rearrangements, or horizontal gene transfer and many genes that are acquired through horizontal gene transfer come in blocks that are recognized as genomic islands. These genomic islands can be recognized by nucleotide statistics (GC skew) that differ from the rest of the organisms DNA and are often associated with inserted tRNA genes, pseudogenes, transposons, and IS elements.[9] The gene clusters encoding the majority of magnetosome proteins have many hallmarks of genomic islands and, as a result, have been termed the magnetosome gene island (MAI).[10] In one species of magnetotactic bacteria, Magnetospirillum magneticum (AMB-1), the MAI is approximately 98 kb long, encodes approximately 100 proteins, and represents over 2% of the bacterium's genetic material.[11] Although the MAI does not have any clear boundaries, it is estimated to be even larger in other cultured strains of magnetotactic bacteria and research suggests that specific mechanisms may be in place to delete the MAI under stressful conditions due to the large energetic burden it creates for the organism.[10]

Most magnetosome research has focused on the model strains of MB that can be cultured in laboratories, but there are many fascinating variations of magnetosome morphology and organization that are found outside these model species. Researchers are able to use high-throughput sequencing technologies to identify the MAI of uncultured MB. One uncultured strain, Magnetobacterium bavaricum (Mbav), is the most phylogenetically distant of the well characterized magnetotactic bacteria and forms hundreds of tooth shaped crystals arranged in multiple strands within the cell. [3] In one study, the DNA of Mbav cells was extracted, amplified, and sequenced and the researchers were able to identify a genomic segment with the characteristics of the mamAB gene cluster found in other magnetotactic bacteria.[11] 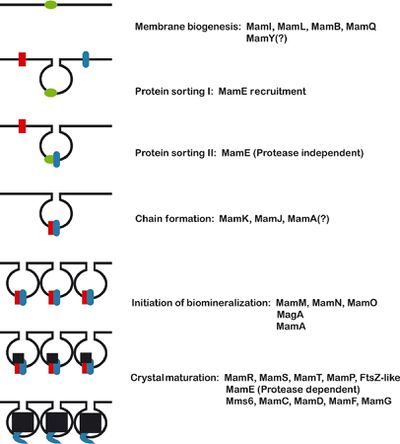 Figure 3- Proposed model of magnetosome formation. "First, the reshaping of the inner cell membrane by MamI, MamL, MamQ, MamB, and other factors (green) creates the magnetosome membrane. Second, MamE is recruited to the nascent magnetosome. Third, MamE (in blue), independent of its protease activity recruits other proteins (red) to the magnetosome. Fourth, MamK and MamJ help to organize magnetosomes into chains. Note that this step is independent of biomineralization and may occur before or after crystal formation. Fifth, biomineralization is initiated, and small crystals of magnetite are formed. Finally, these small crystals are matured into large crystals in a step that requires the proteolytic activity of MamE." Komeili (2012) Courtesy of Komeili (http://femsre.oxfordjournals.org/content/36/1/232.figures-only)

The magnetosome membrane is an independent structure that provides the proper chemical environment for biomineralization and protects the rest of the cell from any toxic byproducts of biomineralization. Multiple studies have shown magnetosome membrane formation even when iron is eliminated from the growth medium, suggesting that these structures form regardless of environmental conditions.[3] Electron cryotomography (ECT) has been used to generate high resolution images of the structure and organization of magnetosomes within MB. Recently, Komeili and Arash used ECT to show that magnetosome membranes are invaginations of the inner cell membrane,[14] and further research suggests that they may stay as invaginations throughout the entire biomineralization process. The cohesion between the magnetosome membrane and the inner cell membrane helps provide mechanistic explanations for some of the main components of magnetosome formation and magnetotaxis. If magnetosomes were free within the cell, an additional structure would be necessary in order to provide a connection between the magnetosome chain and the cell body and allow for magnetic orientation. Additionally, an open connection between the magnetosome lumen and the periplasmic space may be important in the transport and transformation of iron. [3] There is evidence suggesting, however, that not all magnetosomes are permanent inner membrane invaginations and that some may separate from the inner membrane.[11]

The molecular mechanisms of magnetosome membrane biogenesis are of great scientific significance because the processes that require remodeling of cellular membranes are very widespread in nature. Bending a lipid bilayer during vesicle formation, endocytosis and cell division requires the activity of proteins that lower the energetic barriers and expose the hydrophobic tails of lipid molecules to the inside of the cell. These processes have been studied in eukaryotic cells, and the components of cytokinesis have been studied in depth, but the processes of bacterial lipid-bound organelle formation is generally not understood at a molecular level. Gene deletion studies have identified four genes whose individual deletions result in loss of magnetosome membrane formation in cultured AMB-1 cells: mamI, mamL, mamQ, and mamB.[3]

Depending on the organism of study and the experimental setup, it is estimated that approximately 20-40 proteins are localized or enriched in the magnetosome membrane. [15] 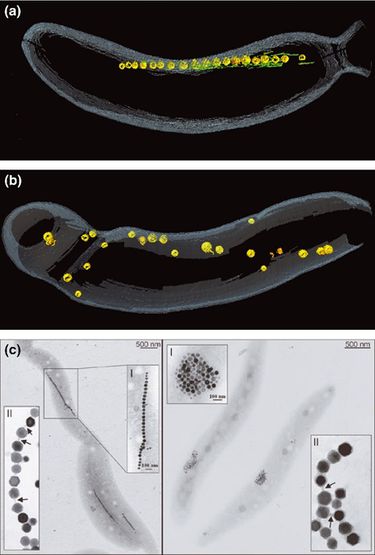 Figure 4- "Magnetosome chain formation. (a) Image of an AMB-1 wild-type cell generated by segmentation of an electron cryotomogram. Numerous filaments (green) can be seen flanking the magnetosome chain (yellow). (b) Similar analysis of an AMB-1 strain deleted for mamK. In contrast to wild type, magnetosomes are disorganized and not flanked by filaments. (c) TEM images of wild-type (left panel) and mamJ deletion mutant (right panel) of Magnetospirillum gryphiswaldenseMSR-1. Note that the magnetosome chain has collapsed into a ball in the absence of mamJ" Komeili (2012) Courtesy of Komeili

Individual magnetosomes need to be organized into chains in order to help orient the cell in magnetic fields. Different species of magnetotactic bacteria form chains that look distinctly different from one another. As mentioned above, AMB-1 and MSR-1 have single chains that are composed of 15-30 magnetosomes while Mbav contains several hundred crystals in multiple chains. Komeili et al. (2006) showed that magnetosome chains are surrounded by cytoskeletal filaments composed of an actin-like protein MamK.[16] The current hypothesis is that MamK provides a structural scaffold for the formation of magnetosome chains. This hypothesis is supported by a study in which the deletion of mamK in AMB-1 cells resulted in normal magnetosomes with no major defects in biomineralization or formation, but the magnetosomes were scattered throughout the cell and did not organize as one coherent chain (shown in figure 4 a,b).[16]

Biomineralization is the process in which organisms produce minerals, usually for some biological function. Magnetotactic bacteria form magnetosomes in order to provide a compartment to safely and efficiently direct the formation of magnetite crystals. MB are able to accumulate large amounts of intracellular iron that are at least 100 times higher than that found in commonly studied bacteria. Magnetotactic bacteria do not initiate iron uptake and magnetite (or greigite) formation until the surrounding medium is nearly anaerobic. The first step in magnetite biomineralization is the transport of iron into the cell.

Edited by Kelsey Waite, a student of Suzanne Kern in BIOL168L (Microbiology) in The Keck Science Department of the Claremont Colleges. Spring 2015.