Malassezia is a genus of organisms under the kingdom of fungi that exist in mycelial and yeast forms [1]. These organisms have a lipid layer encircling their cell walls and have thicker cell walls than most yeast [1] . Most known species of Malassezia are lipid-dependent and many are part of the human normal flora [2] . Such species can be found in sebum-rich areas of the skin and are linked to skin diseases such as pityriasis versicolor, Malassezia folliculitis, dandruff and seborrhoiec dermatitis [2].

In 1939, it was first recognized that Malassezia species required lipid uptake for growth [1]. The need for a lipid-rich environment is consistent with the localization of Malassezia species on sebum-rich parts of the human body. Human sebum is a substance secreted by sebaceous glands and is found in high levels on the skin of the face, scalp and upper trunk [1]. It plays an important role in maintaining the epidermal permeability barrier and has many other related roles [3]. Sebaceous gland activity is highest from puberty on, and declines after the third decade and it also correlates with incidence of scalp scaling [3]. Sebum mainly contains triglycerides, esters and fatty acids [3]. Malassezia globosa was shown to metabolize triglycerides in an artificial sebum and consequently produce free fatty acids [3]. These results are demonstrated in Figure 1. The products of the lipid metabolism of Malassezia species are unsaturated fatty acids and saturated fatty acids and the latter are consumed to induce proliferation of Malassezia [3]. 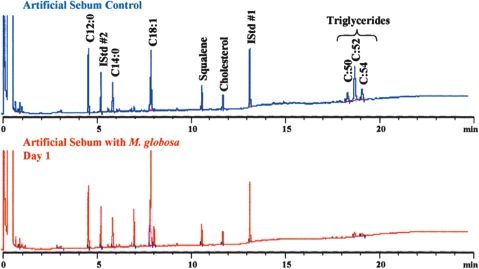 The need for a lipid-rich environment was revealed through sequencing of mRNA transcripts of Malassezia species. It was found that M. globosa expresses genes necessary for the processes of glycolysis, TCA cycle, amino acid synthesis and nucleic acid base synthesis but there was an obvious absence of genes encoding fatty acid synthases [2]. This explains the need for an external source of fatty acids [2]. In addition, secreted lipases play an important role in Malassezia species because they are needed to degrade triglycerides of the human sebum into free fatty acids [4]. Such lipases have been isolated and purified from the human scalp, one of which is produced from the lipase gene LIP1 [4]. 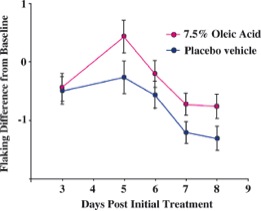 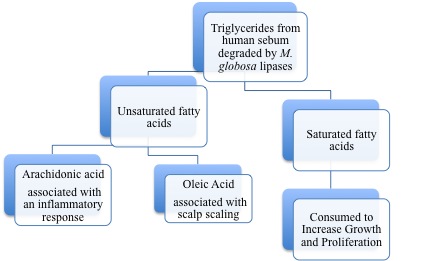 FIG 3 A Model for skin disease etiology associated with M.globosa (based on [4] and with information from [1])

Malassezia seem to play a paradoxical role in modulating immune responses by both promoting and down regulating the immune system [1]. One study demonstrates that Malassezia species are capable of up-regulating the production of reactive oxygen intermediates such as hydrogen peroxide, superoxide and hydroxyl radical by macrophages, which enhances the killing of intracellular bacteria [6]. However, another study shows that Malassezia suppresses the secretion of pro-inflammatory cytokines including IL-6, IL-1β and TNF-α [7]. This was further studied to show that the lipid component of Malassezia cell walls directly induces this down regulation thus making it an essential component to the commensal state of the organism [8].

The following diseases are shown to be associated with Malassezia but no causal link has been shown between the listed diseases and their associated organisms [3].

Pitiryasis Versicolor: This disease is associated with the mycelial form of Malassezia species and is characterized by pigmented lesions on the upper trunk [9]. It is also characterized by tissue inflammation and tissue invasion by the organisms [10].

Malassezia Foliculitis: This condition is characterized by an inflammatory rash on the upper trunk and is associated with M. globosa [10].

Seborrhoiec dermatitis/Dandruff: There is an ongoing debate over whether or not these two conditions are separate, or if dandruff is just a milder form of seborrhoiec dermatitis [1]. Both diseases involve scaling and inflammation of sebum rich skin, mainly on the scalp [1]. There is no evidence of tissue invasion in hair follicle biopsies of affected individuals [10].

Antifungals have been used as effective treatment against the aforementioned diseases [11]. Zinc pyrithione is shown to effectively treat dandruff and seborrhoiec dermatitis [9]. Malassezia species are also susceptible to azole drugs including voriconazole, ketoconazole and itraconazole [11]. The main issue with these antifungal therapies, however, is that the Malassezia genus comprises a heterogeneous group of species that can vary in their susceptibility to these drugs [11].

There is ongoing research being done on Malassezia species due to the relevance of these organisms to skin diseases. Further research into which species of Malassezia are responsible for certain conditions is currently underway in order to find more specific treatments to these conditions [9]. Also, the proposal of a topical treatment, which would alter the lipid composition of affected skin, is a current area of research in controlling Malassezia-associated diseases [9].